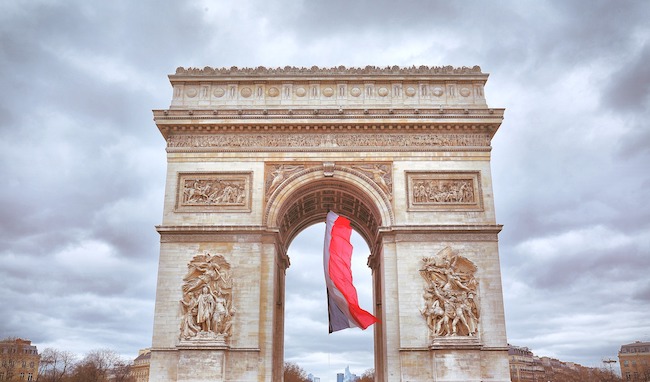 With the city’s recently announcement of an ambitious plan to turn the Champs-Élysées into a garden, we’re shining the spotlight on the avenue’s famous anchor

The architecture of the city of Paris can seem overwhelmingly imposing; the arrogance of its monuments, not unlike the arrogance of its former rulers, defy human scale. In architecture, human scale is often deliberately violated for effect. Memorials are constructed on a scale larger than life as a purposeful juxtaposition. It’s this very dichotomy that makes Paris so extraordinary. Nowhere is this more evident than at Place Charles de Gaulle, commonly known as Place de l’Étoile, at the western end of the Avenue des Champs Élysées. Here, the Arc de Triomphe rises majestically from the center of the circular plaza, its 12 avenues spreading outward like the points of a shining star.

Admittedly, the Champs-Élysées is one of the loveliest avenues in the world, but it was once a murky swamp used by butchers and tanners for their waste. In 1684, André Le Nôtre, gardener to King Louis XIV, designed and completely transformed the Tuileries gardens, originally created by Catherine de Medici in 1563. With a strict axial alignment, perpendicular to the Tuileries Palace (adjacent to the Louvre and destroyed by fire in the 1871 during the Paris Commune), he created a grand allée lined with a double row of elm trees on each side, called the Grand Cours. His design carried the symmetrical line of this allée beyond the gardens and out into the countryside by tracing a path through an open field, straight to the wooded summit of the Montagne du Roule (one of Paris’ 12 hills) on the edge of the city of Paris. Instinctively, Le Nôtre knew that urban gardens, parks and woodlands provide myriad benefits to people. More importantly, they create social cohesion and strengthen a sense of identity, something that was sorely lacking during his King’s reign, but keenly recognized by Napoléon I (1769-1821) when he seized power in a 1799 coup d’état, effectively ending the French Revolution.

In 1804 Napoléon claimed himself Emperor of France. After the Battle of Austerlitz (1805), one of his greatest victories, he commissioned the triumphal arch we know today. He is known to have said to his soldiers, “When you come back home, it will be through this triumphal arch.” The present day Place de l’Étoile was formally chosen by the architect, Jean-François-Thérèse Chalgrin (1739–1811). Chalgrin’s neoclassical style was inspired in part by the Arch of Titus in the Roman Forum. The Arc de Triomphe is the largest triumphal arch in the world. In its simplest form, the Arc consists of four semicircular arches supported by massive masonry pillars, in turn supported by pedestals, and surmounted by an entablature and a vaulted attic. The columns, which in most other structures have a purely decorative role, here have a supporting role.

Napoléon soon lost interest in the project, and construction slowed to a virtual halt over the next few years. Little more than the foundation had been completed by the time of his second marriage, to the Austrian archduchess, Marie-Louise, in 1810.  Honoring her ceremonial entry into Paris, a full-scale, trompe l’oeil depiction of the design was created by the artist, Louis Lafitte, on wood-framed painted canvases, and erected at the site. It enabled Chalgrin to make changes to his plans by adding, removing, and choosing different architectural ornamentation. Chalgrin died one year later. By then the pillars of the Arc had reached the height of 53 feet. Succeeding him as head of the project was his pupil, Louis-Robert Goust.

Work slowed even more following Napoleon’s abdication in 1814. He never saw the monument completed, dying in exile in 1821 on the island of Saint Helena. Work on the monument didn’t resume until 1823. The restored King Louis XVIII was motivated, both by the success of the French invasion of Spain by his nephew, the Duke of Angoulême, and also by his desire to erase Napoléon’s legacy. Goust and another architect, Jean-Nicolas Huyot (1780-1840), continued construction. One year later, Louis XVIII died, and his brother, Charles X, succeeded him.

Charles continued work on the monument, returning to Chalgrin’s original plans. By 1828 the Arc rose to the architrave (decorative moulding that conceals joinery) of the entablature (the horizontal band that runs along the top of  the pillars, connecting them). Two years later Charles was forced to abdicate, continuing the revolving door of imperial rulers whose ideas of grandeur took architectural form. Louis-Philippe (1830-1848) ascended to the throne. He subsequently appointed the architect Guillaume Abel Blouet (1795-1853) to finish the Arc. Adolphe Thiers, then Minister of the Interior and later President of the Republic from 1871-1873, tasked numerous artists and sculptors to produce bas-reliefs, high-reliefs, friezes, spandrels, paintings, and the decorative balustrade that crowns the monument.

After 30 years of work and a cost of 9.3 million francs (which amounts to €8,600,000), the Arc de Triomphe was finally inaugurated on July 29, 1836. It stands 164 feet high,148 feet wide, 73 feet deep, and rests on a foundation that extends 27 feet below ground. The grande fête which was supposed to take place that evening was canceled for fear of an attack on the king. Only 11 people attended. The Arc was illuminated by 700 gas lamps. Marble surfaces were incised with the names of over 600 generals and 128 battles fought during the period of the first French Republic.

From the top of Napoleon’s Arc de Triomphe in Place de l’Étoile, at the juncture of the 8th, 16th and 17th arrondissements, the extent of Paris’ transformation can be truly understood and appreciated. Out of the chaos of streets that had haphazardly criss-crossed the city, symmetry and function emerged. Originally, the basic star design cut through thick woodland to make hunting easier, thus the hunter could stand at the center and easily shoot animals that crossed between the dirt trails. After urban development began in 1770, the hill on which the Arc now stands was lowered, leveled and eventually terraced. From 1787 the Place de l’Étoile was crossed by the General Farmers’ Wall which functioned as a tax boundary for the city of Paris. A customs barrier was situated at the end of what is now the Champs Élysées.

It was Georges Eugène Haussmann who approved the final Place de l’Étoile’s design. Haussmann, commissioned by Napoleon III to modernize Paris, undertook the most comprehensive program of urban redevelopment ever instituted by a major city. He entrusted the architect Jacques Ignace Hittorf (1792-1867) with the development work around the Arc. Twelve grand avenues forming a star around the circular plaza were created. The plaza itself is 394 feet in diameter.

The alignment of the Arc forms part of Paris’ historical axis, the Voie Triomphale, meticulously calculated so that the sun sets under the Arc twice a year, around May 10th and August 1st. The view extends from the courtyard of the Louvre’s Arc de Triomphe du Carrousel in a straight line of sight through the Tuileries Gardens. From there it lines up directly with the Obelisk in the Place de la Concorde, and continues through the Avenue des Champs-Élysées and the Arc de Triomphe. As an architect, I consider it one the the most remarkable perspectives ever envisioned for a city.

The Arc de Triomphe continued to serve as an iconic symbol of France. The coffins of many French luminaries, such as Victor Hugo and Ferdinand Foch, have lain in state there. In addition, victory parades have frequently marched through the Arc. The Tomb of the Unknown Soldier, established after WWI on Armistice Day 1920, rests at the its base. It has an eternal flame which burns in memory of the dead who were never identified, from both world wars. And since 1923, a memorial flame has been rekindled every evening at 6.30 p.m. and has never been extinguished.

A few weeks after the end of WWI, Charles Godefroy flew his Nieuport fighter plane through the Arch to salute all the airmen killed in the war. It was captured on film, which is available on YouTube below.


Access to the Arc de is via a pedestrian underground corridor which links the tunnel at the north corner of the Champs-Élysées to the Avenue de la Grande Armée. If you have enough stamina you can climb the 284 steps to reach the terrace, and if not, there is an elevator. The best time to see the extraordinary panoramic views from the terrace is at dusk, when the setting sun bathes the city in golden light. One level below the terrace is a small museum with interactive exhibits about the history of the Arc, including original documents, engravings, drawings, photos, models on its construction, and other historical facts.

For information about opening hours and tickets, visit the official website here.