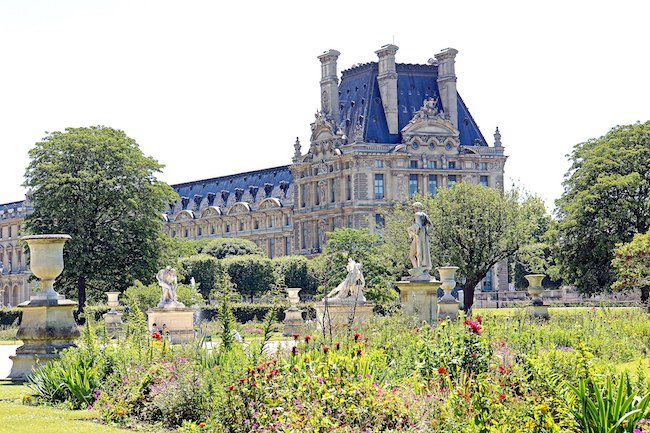 When we discovered that Paris’s parks were to close as part of the battle against coronavirus, we probably all felt a little like the man in this statue from the Jardin des Tuileries, clasping his head in his hands in horror. It seemed the final straw in a lockdown that had already severely limited us. Yet as the city gradually does reopen, the luscious green spaces are likely to be the first places we’ll head to, so that we can enjoy the fresh spring air while still aligning ourselves with the new social distancing laws.
It seems a fitting moment, then, for a round-up of some of the top parks in Paris. Let’s look towards our spring season! 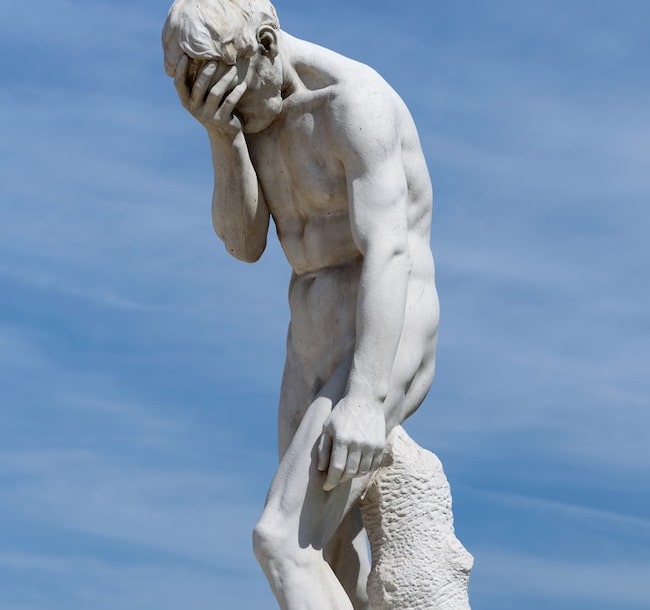 Head in hands at the Jardin des Tuileries via Wikipedia, Joe deSousa

If you haven’t seen this beauty spot, you haven’t seen Paris – this location near the Louvre and Place de Concorde is where its beating heart is located. With its elegant sculptures and tree-lined walkways, the Tuileries Gardens were once favored by Coco Chanel, who would typically take strolls there after dropping in at her regular café, Angelina, for hot chocolate. The space was originally known for its tile factories, hence its name (“tuile” is French for “tile”.) Then, in the 1500s, competitive Queen Catherine de Medici summoned the top landscape architects with the vision of creating the best garden in all of Paris. By most accounts, she succeeded. Later, Marie Antoinette would own her own private section here, and then Napoleon would adopt the Tuileries Palace as his home. Nowadays, this paradise garden is for the pleasure of the public. While its three restaurants might be closed this spring, there are still plenty of opportunities for social distancing without sacrificing fresh air and exercise. Be sure to stop at the statue of Mercury riding Pegasus – formidable! 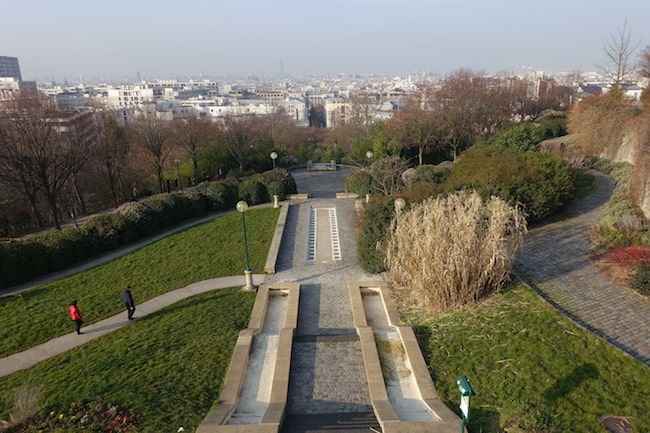 Decided to be more cautious about crowding? Almost out in the suburbs, this lesser visited gem – the Primrose Hill of Paris – offers charming panoramas with fewer threats of coronavirus-carrying crowds. This was once the Montmartre of the 20th arrondissement too – a hilltop playground that had overcome poverty and adversity to build a thriving entertainment culture. In the 19th century, it was home to a rowdy and raucous Mardi Gras carnival parade each year. Back then, restaurants with names like Le Coq Hardi (the Hardy Rooster) ruled the, er, roost! Plus later, the legendary singer Edith Piaf was born in this district, beneath a lamp post. Nowadays, however, the highest park in Paris offers some quiet respite from the city courtesy of its crisp, pollution-free hill air and its panoramic views stretching as far as the Eiffel Tower. The flower bed displays here have won awards, while a vineyard at the top of the park cultivates top Pinot Meunier vines. 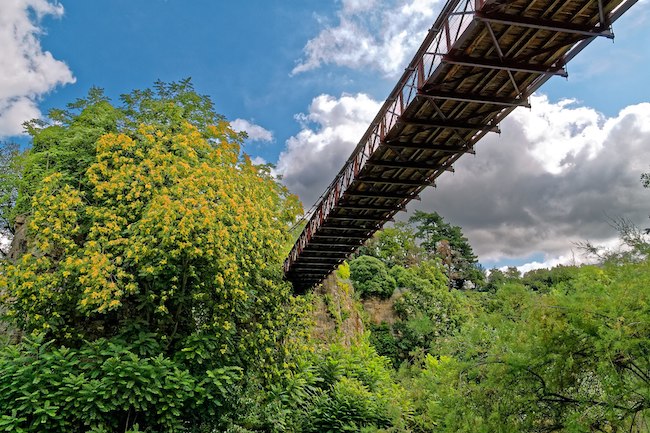 Another beauty spot close to Belleville is the Parc des Buttes-Chaumont. On the grounds of this huge 25-acre space, you’re sure to find the right social distancing spot. For centuries, the gory Gallows of Montfaucon stood on this land, displaying executed bodies as a chilling warning sign to would-be criminals of the consequences of falling foul of the law. Some nighttime visitors claim parts of the site is haunted and that they can hear rattling chains and the retrospective squeals of the victims as they died. Those less gothic will prefer to skip the ghost hunt and visit the site during the day, scrambling across a suspension bridge built by Gustave Eiffel of Eiffel Tower fame to reach the Temple de la Sibylle. From the belvedere at the top of its 50-meter hill, visitors can enjoy views of Montmartre and beyond, the cupolas of Sacré-Cœur standing out on the skyline. Also boasting a beautiful lake and a grotto with an impressive waterfall, it’s a great escape from the hubbub of the city. 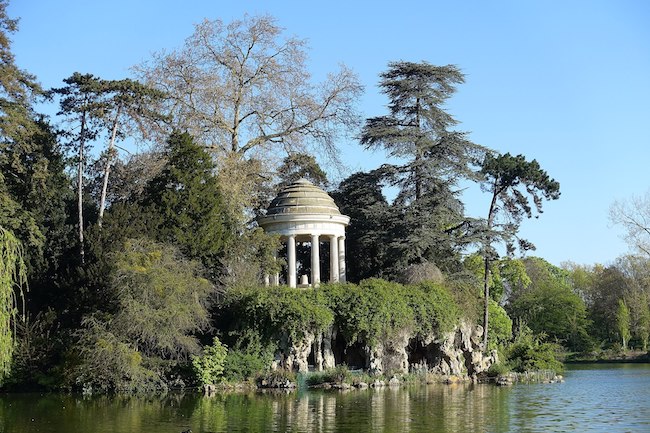 The Bois de Vincennes – your forest fantasy. Although it boasts some hugely popular attractions, from a zoo and a golf course to multiple Michelin-starred restaurants, the Bois de Vincennes is so immense that it’d be impossible not to find an abundance of wide open space. Officially the largest park in Paris, the first six arrondissements of the city could be fitted into it with space still to spare. It’s also three times larger than New York’s Central Park. Originally a royal hunting ground, then a military training ground for Napoleon’s army, it is now a cruelty-free pleasure park, known as the “right lung” of the city thanks to all of its oxygen-dispensing trees. Its smaller sister site, the Bois de Boulogne, is branded the “left lung.” Four lakes, a temple of love, a fortified chateau and a stunning sculpture garden await, and even if the main attractions are closed, there are plenty of walking trails and quiet spots to stretch out your yoga mat. Shake the city out of your hair and breathe some forest pinewood into your reinvigorated lungs! The trauma of being cooped up due to the coronavirus will soon melt away. 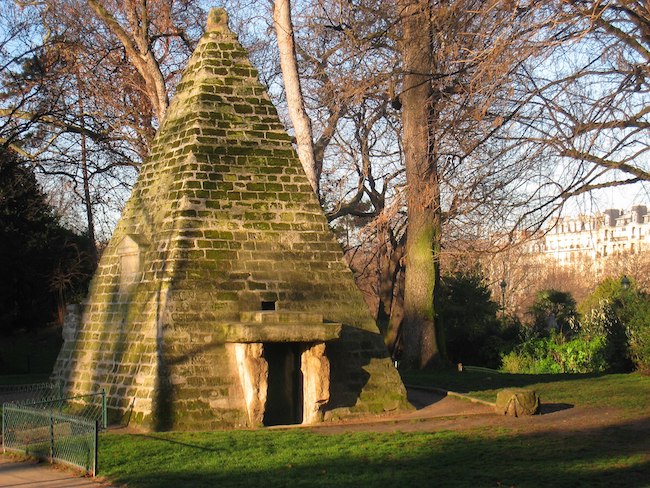 Parc Monceau
Best for… understated elegance with a multinational flavor

This spot is perhaps Paris’s most international park. Pass through palatial wrought-iron gates – think the ones on Place Stanislas in Nancy but with a greener and more tranquil backdrop – to reveal visuals influenced by countries around the world, all blended with overtones of a quintessentially Parisian flavor. For instance, there’s a classic British garden, an Egyptian-style pyramid, Roman colonnades and even a fairytale bridge modeled on the Rialto Bridge in Italy’s Venice. Also nearby is a bright red Asian pagoda, and the Musée Cernuschi, dedicated to the best in Asian art. Then right at the edge of the park lies the Musee Nissim de Camondo, a glitzy mansion showcasing antique French furnishings. As the restrictions on public life are slowly lifted, you’re likely to find these smaller museums much less risky in virus transmission terms than their city centre equivalents – and there’s plenty to enjoy in them. Best of all, however, is a stroll through the park itself, passing highlights like a monument dedicated to Frederic Chopin and the remains of a funeral chapel arranged by Catherine de Medici for her husband King Henri II. So beautiful that it took pride of place in Claude Monet’s paintings, this park is an essential for every itinerary.

As with any park, some areas might be more populated than others, but there are always ways to keep a distance, unlike at the supermarket queues!

Social isolation might not be what any of us had in mind for the start of spring but the beauty of these parks will soften the blow – and they’re great places to head as soon as the lockdown lifts! 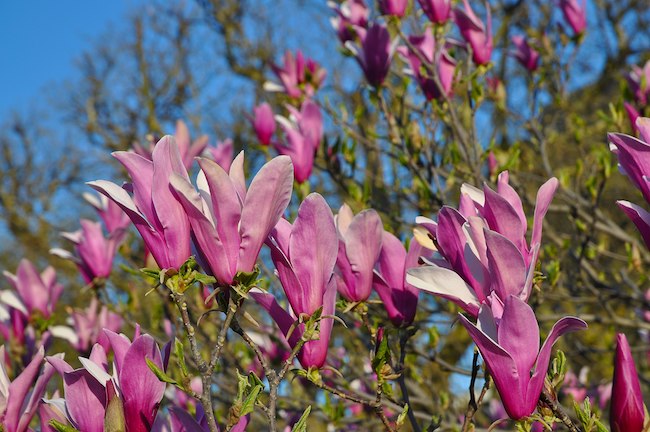 Springtime Flowers – Magnolia in Paris by Moonik via Wikimedia Commons