Christo and Jeanne-Claude in Paris: The Arc de Triomphe Wrapped

Did you hear about the project to wrap the Arc de Triomphe? Can you imagine something so dramatic and grandiose? The idea was originally conceived in 1962 by Christo and Jeanne-Claude, the world-famous artists behind “The Gates” in New York City’s Central Park, “The Floating Piers” in Italy and “The Pont-Neuf Wrapped” in Paris. The legendary Parisian monument, commissioned by Napoleon in 1806, will be wrapped in 25,000 square meters of recyclable polypropylene fabric in silvery blue along with 7,000 meters of red rope. Initially planned for Fall 2020, this ephemeral exhibition has had to be postponed for a year because of the Covid-19 pandemic. New dates will be Saturday, September 18 to Sunday, October 3, 2021. 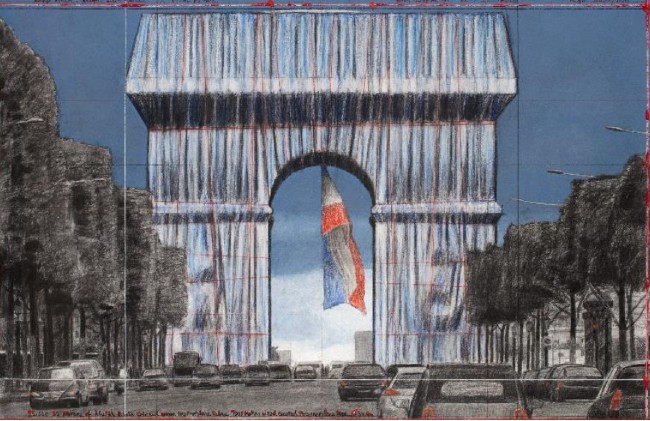 Sadly Christo passed away on May 31 this year. He and his wife Jeanne-Claude— who both shared the exact birthday of June 13, 1935— had first met in Paris at the age of 23. So began a lifetime of creative collaborations that was as inspiring as it was revolutionary, their works deemed some of the most spectacular of the 20th and 21st centuries. (Jeanne-Claude was deceased in 2009.) 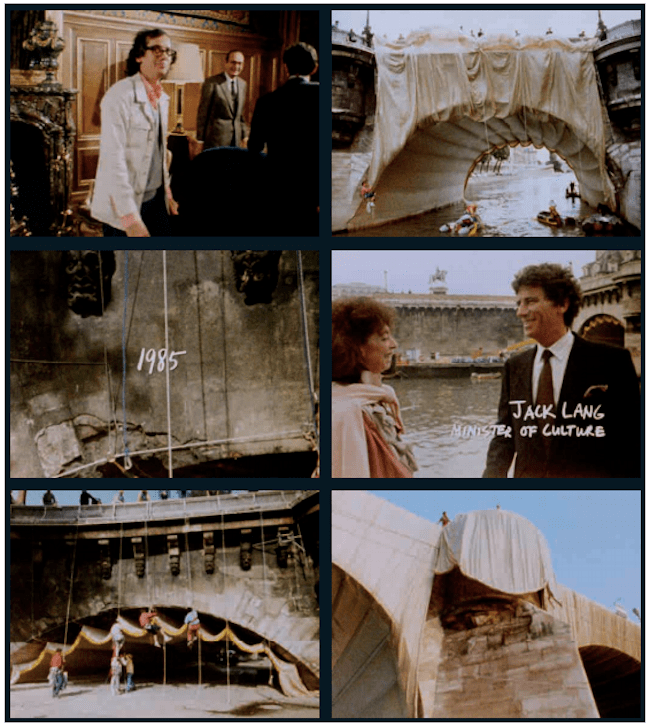 Even if we have to wait another year to see the Arc de Triomphe project finally reach fruition, there’s another way to pay homage to these wonderful artists. Currently showing at the Centre Pompidou, the exhibition “Christo and Jeanne-Claude. Paris!” focuses on the artwork the duo created in the City of Light. In fact, Christo himself worked with Sophie Duplaix, chief curator of contemporary collections at the Musée national d’art moderne, to put together the show prior to his death.

A section is devoted to “The Pont-Neuf Wrapped,” and it’s fascinating to see the architectural drawings of the bridge shimmering in its golden wrapping. (It was the sale of these preparatory collages and drawings that always financed the artists’ large-scale projects.) But the exhibit highlight is the documentary, Christo in Paris, directed by Albert and David Maysles, that follows the lengthy process of making the dream a reality over a 10-year period. This must-watch film illuminates the political maneuvering with then-Mayor Jacques Chirac, intriguing family dynamics, the couple’s passion and humor, and the reactions of the public when “The Pont-Neuf Wrapped” was finally unveiled in 1985. It’s a mesmerizing portrait of both the artistic couple and Parisian society at that time.

“Christo and Jeanne-Claude. Paris!” is on show at the Centre Pompidou until October 19, 2020. It’s best to buy tickets online in advance, and remember that masks are required in Paris museums.

To quote the official press release: “This first presentation of work by Christo and Jeanne-Claude in a Parisian institution is an ambitious undertaking. On the one hand, it unveils works from their studio that are unknown to the general public, such as their Cratères series of matierist paintings influenced by Jean Dubuffet, Surfaces d’Empaquetage and Boîtes, as well as an exceptional selection of packaged objects and their very first Vitrines and Store Fronts. On the other hand, the exhibition retraces all the developmental stages of a masterful urban work that is now imprinted on our collective memory, The Pont-Neuf Wrapped, Paris, 1975- 1985, from preparatory studies (some forty drawings and collages) to elements related to its engineering, photographs in situ and a documentary film shot on the occasion of the project’s realization, which lasted ten years.

The exhibition design reflects these two contrasting moments in Christo and Jeanne-Claude’s artistic journey: in the first section, works conceived in the intimacy of their cramped studios; in the second, the deployment of works outdoors in the urban landscape. The exhibition puts in perspective the seminal character of these Parisian years and the period’s great importance to the development of the work that followed.” 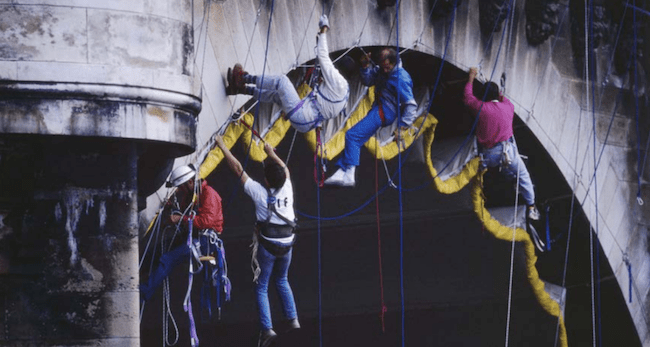 Climbers attach the fabric hoisted under one of the arches and adjust the tension of the straps sewn onto the fabric, making it hug the lines of the vault [September 16-22, 1985]. © Christo 1985 / Photo © Wolfgang Volz

Previous Article Author Lindsey Tramuta on the New Parisienne
Next Article Arthur Rimbaud: Poetry in a Time of Dislocation