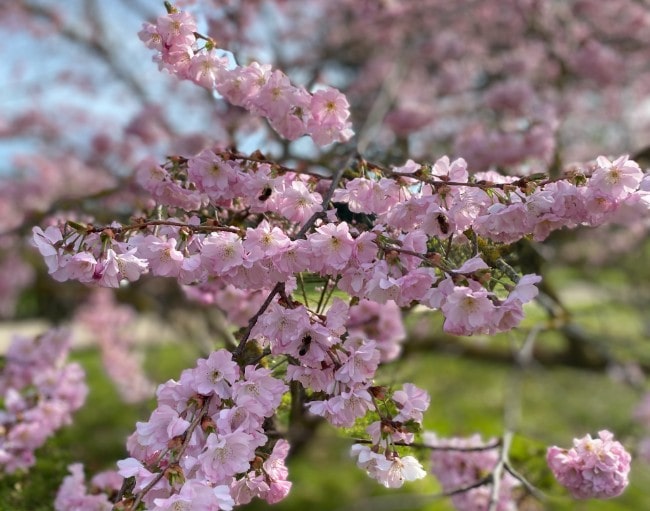 We are all ready for some good news and I am very happy to deliver it: Spring is right around the corner for many of you and already here in Paris! While the majority of tree branches have not yet leafed out, the bulbs — the unsung, underground heroes — have produced a bumper crop of beautiful color alongside the stunning magnolia and prunus trees. Here are a few favorite garden destinations to seek out on your next stroll in the City of Light.

The Jardin du Luxembourg is often cited as the favorite park of Parisians and for many good reasons. Centrally located on the Left Bank, it offers both symmetrical parterres and naturalized bulbs in the lawns with hundreds of chairs to people watch and soak up the sunshine. While the citrus and palms trees are still inside the greenhouse until mid-May, there are 1000 espaliered fruit trees growing in the orchard and bursting into flower. With the warmer weather the daily pétanque games will also pick up in the south-western corner of the park. Looking to play an outdoor chess match? Head over to the orangerie where you will find a partner on the dedicated tables, next to the climbing roses.

The diminutive size of the Palais Royal garden belies the beauty and quality of the plantings you will find there. It was redesigned by the late American landscaper Mark Rudkin in 1992;  he chose to plant thousands of bulbs for spring color and punctuate the beds with noble magnolia trees. Perennials and rosebushes fill out the beds in the later seasons and include a rose created by Meilland, appropriately named Palais Royal. The surrounding high walls concentrate not only the warmth of the space but also magnify the flowers’ perfume. The alleyways between the double rows of linden trees are named for previous residents, the writers Colette and Jean Cocteau, offering plenty of shade and a heavenly scent in mid-June.

You may feel as though you are in Holland as you wander along the paths at Bagatelle, on the edge of the Bois de Boulogne. Three million bulbs have been naturalized throughout this 60-acre park, which begin flowering in February and carry on until late April. The seasonal beds close to the chateau and the orangerie are filled with cheerful Icelandic poppies and color-coordinated tulips this year. My favorite section is surrounding the gardener’s brick cottage, where one side is a joyous potager with a melange of flowers, vegetables and fruit trees. However, it is the breathtaking wisteria tunnel running down the central alley on the other side that steals the show. Both tree and herbaceous peonies fill the beds alongside clematis, perennials and hundreds of bulbs. While every season is beautiful in this botanical garden, spring is particularly magical here.

Given the 500+ parks, gardens and squares in Paris, the options are multiple and honorable mentions are merited by many gardens. Parc Floral has a remarkable tulip collection and hosts a tulip competition next to the Pine Forest which is filled with rhododendrons and camellias.

The gardeners at the Jardin des Tuileries plant staggered beds, providing an uninterrupted floral display which is ringed with flowering trees in the section closest to the Louvre.

The Champ de Mars is a favorite destination for tourists and often wrongfully overlooked by the locals. The princess trees along the quay will be out in April and behind the Eiffel Tower is a diverse urban arboretum.

Tucked away in the 15th arrondissement, the Georges Brassens garden is a haven of biodiversity, boasting a vineyard, scented garden, cherry trees, used book market on Saturdays, and the “other” original Poilâne bakery.

A weeping cherry tree in the Bagatelle gardens in the spring. © Amy Kupec Larue

The much awaited reopening of the Albert Kahn museum and garden is scheduled for April 2nd, after six years of work. What better way to welcome the springtime than with a promenade through this charming garden? Laid out beside the philanthropist’s last home, it harmoniously blends different garden styles and forest ambiances. The new museum does a beautiful job of illustrating the contributions of Albert Kahn and his activism for peace — providing visitors with a better understanding of this discreet and generous man. If you have the opportunity to visit during the week, it’s less crowded.

The Citroën park is back to life following restoration work on some of its fountains. The spring season highlights the fine plantsmanship of Gilles Clement and his revolutionary gardening principles demonstrated in the “Garden in Motion.”

Stretching from the Bastille to the Bois de Vincennes, the green aerial strip created in 1988 is now known as the Coulée Verte René Dumont. A precursor to New York City’s High Line, it is planted with many beautiful chartreuse surprises as well as cherry blossoms and offers fascinating new perspectives of the city: You will find yourself above street level when you begin at the Bastille, then at street level as you walk for a stretch, then below street level when you emerge from a tunnel near the rue Picpus.

The new kid on the block is the freshly completed Martin Luther King garden in the Batignolles neighborhood of the 17th arrondissement. The 25-acre park is an ecological masterpiece on what was once a disaffected railroad warehouse. Planned with the four seasons in mind, it offers lots of spaces for children to play and practice sports.

The Jardin des Plantes has been attracting and enchanting plant-lovers for nearly 400 years, particularly with the cherry tree display along the central alley. Don’t miss the vibrant iris garden along the rue Buffon which is also full of charm.

Many of the smaller squares in each arrondissement also put on a flowery spring show with their seasonal beds while integrating more and more perennials to reduce their carbon footprint.

Last but not least, have a look at the growing network of community gardens around Paris; there are 150 to choose from! Here is an interactive map to help you locate some near you.

Not in Paris yet to see the cherry blossoms? Fear not – next month will deliver redbuds, wisteria, irises, tree peonies, the late flowering parrot, fringed and lily tulips, along with a plethora of perennials.

Amy Kupec Larue has been living, working and traveling in Europe for 30 years. Her passion for flowers, plants and the French art de vivre led her to a career that combines her knowledge, interests and vast experience with gardens. Since 2005 she has been guiding individuals and groups including the Pacific Horticulture Society, the New York Botanical Garden and the Garden Club of America on tours through public and private gardens in France and Italy. A rose lover, she has been a permanent jury member of the Bagatelle Rose Commission since 2009. Currently Amy is offering armchair travel opportunities through her virtual garden talks; sign up on her website (https://www.gardenguideparis.com/online-offerings)