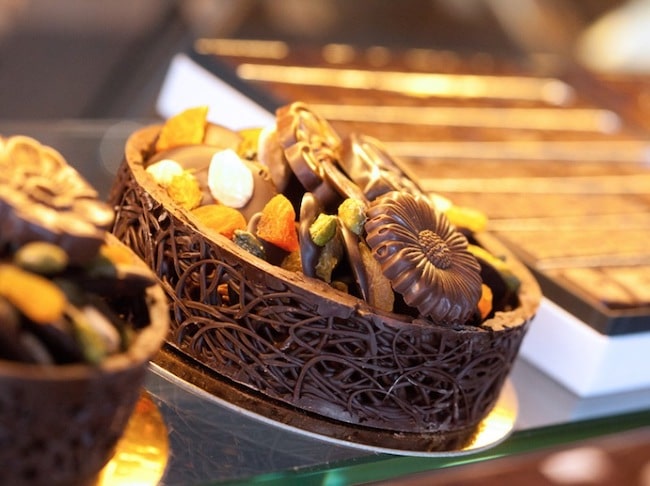 The royal city of Saint-Germain-en-Laye is known for its history, as evidenced by its superb château, national estate and Le Nôtre’s magnificent terrace overlooking the Seine valley and its city center. Proud of these cultural treasures, Saint-Germain-en-Laye is also a place of great culinary inspiration, so here’s a fun day trip idea combining the two themes.

The château is the emblematic place of Saint-Germain-en-Laye! It was, among others, the main residence of François I, Henri II and Louis XIV before he moved to Versailles. It then fell into disuse following the departure of the Stuart family, the last royal family to have resided there. In order to give it back its letters of nobility, Napoleon III had it restored and installed the Gallo-Roman Antiquities Museum, which is known today as the National Archaeology Museum. Inaugurated in 1867, this museum houses one of the most important collections in Europe. It exposes all year long more than 30,000 objects ranging from the Paleolithic period to the Middle Ages. (One of the treasures is the “Lady of Brassempouy,” an ivory figurine from the Upper Palaeolithic discovered in a cave- one of the earliest known realistic representations of a human face.) Temporary exhibitions are regularly organized. Good to know: the courtyard and the chapel are accessible all year long.

The national domain and its large terrace designed by Le Nôtre.

This 40-hectare park, classified as a “remarkable garden,” adjoins the former royal forest of Saint-Germain. It was first laid out by André Le Nôtre as a French garden, including the famous Grande Terrasse of more than 2km, which offers a unique view of the Seine, La Défense and Mont Valérien. In a second phase, in the 19th century, an English garden was created with rare species of trees. Today managed in an eco-responsible manner by the gardeners, this park invites visitors to stroll, relax, and enjoy themselves. Indeed, there are some fun activities for families including playgrounds, a mini-farm and the Epona Club ponies.

At the end of the French gardens, at the beginning of the Great Terrace, there is a gate on which is inscribed the words: “Where Louis XIV was born.” Behind this gate is the hotel-restaurant Le Pavillon Henri IV**** (currently under renovation). The pavilion is one of the last vestiges, with the Rampe des Grottes and the Mur des Lions, of the Château-Neuf. This residence, built at the request of Henry II, was considerably enlarged by Henry IV who had two symmetrical wings built, ending with the chapels of the queen and the king. It is in one of these two chapels that Louis XIV was buried.

From this royal period, earthenware pots, glass jars and hand-decorated medicinal plant boxes remain, evoking medicine under Louis XIV. Dating from the 17th and 18th centuries, these objects were recovered from the Hôtel-Dieu, the Charité and the General Hospital of Saint-Germain-en-Laye (founded in the 17th century) and then installed in the Royal Apothecary in the 1960s. The Apothecary was completely moved and then reinstalled on the first floor of the Eugénie Désoyer Villa where the Tourist Office and the Café des Arts are located.

It was in this 17th century house, owned by the city, that Claude Debussy was born on August 22, 1862 and spent his early childhood. His father had an earthenware business on the first floor. After his death in 1918, it quickly became the main meeting place for all his admirers. Hidden behind a door, you will discover a superb small interior courtyard, as well as a sumptuous wooden staircase, allowing you to reach the museum.

The museum, labeled “Maison des illustres,” gathers objects and photographs that allow a better understanding of the creative process of the composer. Indeed, he liked to surround himself with objects of various origins and artistic currents that strongly influenced his music.

Today classified as a historical monument, this imposing building was built at the end of the 17th century at the request of Madame de Montespan as a royal general hospital for the needy. In 1914 Maurice Denis acquired this building in whose garden he already had a studio. He restored it, named it “Le Prieuré,” and lived there with his family until the end of his life.

The museum’s initial collection was constituted by an exceptional donation made in 1976 by Maurice Denis’ family. Since then, numerous donations and acquisitions of works by Symbolist and Nabis artists, this innovative artistic movement at the crossroads of the 19th and 20th centuries, have enriched it.

So alongside works by Maurice Denis illustrating religious and family themes, intimate scenes, or landscapes of Italy and Brittany, are exhibited paintings by Sérusier, Bonnard, Ranson, Vuilliard,… among the artist’s friends.

Don’t miss the chapel of the old hospital, one of the site’s treasures. The unique décor is the most complete and characteristic religious pictorial set by the artist.

The Space Paul et André Vera, a museum and temporary exhibition space, pays tribute to the brothers and artists of the same name from Saint-Germany, who left their mark on the decorative arts movement.

Paul (1882-1957), a decorative painter, and André Vera (1881-1971), a garden theorist, contributed to the influence of the decorative arts movement, halfway between the Cubist avant-garde and the tradition of French classicism. André Vera’s donation to the city in 1968 allows us to discover Paul’s artistic jewels (tapestry, ceramics, illustrations, watercolors…) as well as the two brothers’ garden projects during the interwar period.

The interior of their dining room and study has been reconstructed identically to those of La Thébaïde, their property in Saint-Germain-en-Laye, which was entirely furnished by the architect-decorator Jean-Charles Moreux. The studio collection is presented annually in rotation.

The city has welcomed no less than 29 kings and emperors who have left their mark on the historic center where mansions and half-timbered houses remain. The city center is also the largest open-air shopping center in the western part of the Ile-de-France region and you will enjoy shopping among the designer boutiques and food shops, each with its own appetizing window displays. Among them are the chocolate shops of Pascal Le Gac, Nicolsen or Patrick Roger, the beautiful Foucher cheese atelier or the Sainte-Suzanne farm. The market place is lively on Tuesday, Friday and Sunday mornings when the voices of the merchants who offer their colorful and tempting stalls resound. Just a few steps away is Saint-Christophe island where several art trades have taken up residence: goldsmiths, sculptors, painters and upholsterers- just push open the door to discover their universe.

To complete this cultural stroll, nothing is better than a small detour to these must-see addresses. At the Grandin pastry shop, you can taste the Maurice Denis cake created for the 150th birthday of the painter. It’s a subtle mixture of hazelnut cream, caramelized roasted whole hazelnuts and raspberry jelly on a short crust pastry. In 1925, the Grandin pastry shop also created the Debussy, in tribute to the musician-  a small cake composed of a hazelnut cookie, praline mousse, rum raisins and chocolate glaze. To complete this harmony of sweets, don’t forget the Saint-Germain cake, created by the Hardy pastry shop.

There’s no place better to enjoy the beautiful colors of autumn than sitting on one of the many restaurant terraces located downtown. These eateries serve a wide variety of cuisines- from traditional French or Mediterranean dishes, Asian or African specialties- the choice is yours.

You may be so smitten by this five-senses journey that you’ll want to spend the night in town (we don’t blame you!) Why not consider one of these fine establishments? The Relais & Château Cazaudehore or Maison du Val for a stay in the heart of the forest,; Ibis Hotel or Mercure are ideal for families. If you prefer a stay in a gîte or a bed and breakfast, many addresses are available on the website: www.seine-saintgermain.fr