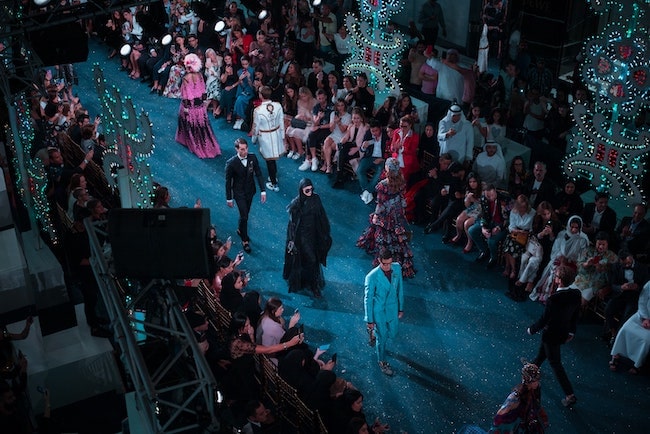 The Spring/Summer 2022 Paris Fashion Week shows have added an extra burst of color and flavor to Paris over the past week, and it’s easy to see why: Fashion enlivens.

Monday, September 27 to Tuesday, October 5 was full of old favorites that brought new life with their latest collections, signaling one of fashion’s most remarkable powers – reinvention. Apart from the shows, there was also the always-fun and inspiring street style found throughout Paris.

Here’s a round-up of some of our favorite – and the most noteworthy – shows from fashion week in Paris. Classic French favorites like Chanel, Vuitton, and Givenchy, along with fan-favorite England’s Vivienne Westwood, all hit home runs, too, but here are some standouts that caught our eye.

Now, this was a fun one. Balenciaga went where no other fashion house has gone before (at least, to my knowledge) for fashion week – it went to The Simpsons. Yes, that’s right – the celebrated and beloved Matt Groening cartoon TV show that’s been running for decades collaborated with the iconic house to create a fashion-themed 10-minute episode of The Simpsons that had everyone talking (and watching). It’s now been viewed over 9 million times.

In the video, Homer is desperate to get a gift for Marge for her birthday. He spots her curled up asleep with a fashion magazine open to a page with a Balenciaga ad and buys Marge a gorgeous green Balenciaga dress. Balenciaga wins the award for most creative fashion week offering this year.

The show itself delivered, too. Balenciaga leaned heavily on black, and some might argue it leaned heavily into the cartoon element, too, with dresses like this one – a massive poufy black dress that you could barely walk down the street in due to how cumbersome it must be to wear it.

Dior always knocks it out of the park, and this year was no exception. The house had the honor of being the first major show to take place in Paris for this year’s fashion week. The 60s-inspired looks included jean jackets and blazers aplenty. Italian artist Anna Paparatti created the show’s Roman night club-inspired set and it had everyone buzzing.

The luxury house Hermès took their show to new and unusual heights, opting to host it at an airport hangar, Paris Aéroport – Le Bourget (LBG). Vogue recounts how Hermès even executed a plane landing for the show’s finale in a show-stopping move that had everyone talking. Sticking to the classics, the house’s latest collection leaned heavily on a black and white palette with spring-appropriate cut-out silhouettes.

Lanvin, like Balenciaga, leaned on cartoons for inspiration this year. In a unique pairing, the house’s creative director, Bruno Sialelli, used his love of heroes and heroines to execute a Lanvin collaboration with Warner Bros and the Batman and Catwoman characters, which reflected Sialelli’s “passion for comics.” We, for one, were loving it.

However, it wasn’t the Batman-themed garbed that was the most show-stopping event; it was 51-year-old iconic supermodel Naomi Campbell stealing the show in the best way possible while wearing a gorgeous black cape on the runway.

The house of Chloé took the seasonal vibe of these shows to another level, hosting their Spring/Summer 2022 runway show outside along the Seine. The looks, dubbed “eco-chic” by The Guardian, were artisanal pieces from leftover fabrics.

The show itself was daring and delightful, as onlookers could see the house’s latest looks in real-time as if observing a chic woman walking along the Seine on her way to meet her friend for an espresso in a Parisian café. Chloé and Balenciaga both take the cake for innovation this year. (Notably, Valentino’s Friday night show also employed this same idea – fashion in the streets, which was a smashing success.)