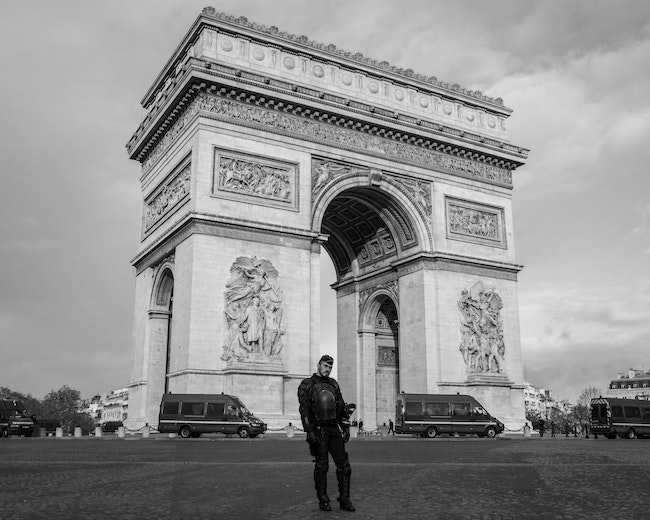 It’s a wrap for “L’Arc de Triomphe, Wrapped,” the posthumous project by Christo and Jeanne-Claude which saw the famous monument on the Champs-Elysées covered in recyclable fabric. The work is now being dismantled after a three-week exhibition. Didn’t make it to the show? Check out the photo essay by contributor Meredith Mullins.

It’s fashion week in Paris and Chloé staged its show on the banks of the Seine, Hermes went bold with an airport hangar setting, and Steve Job’s 23-year-old daughter made her catwalk debut at the Coperni Spring/Summer 2022 show. To quote Town & Country: “There was a time when snapping images of the models walking the runways of Paris Fashion Week was reserved for professional photographers, but as with so many things in the modern age, smartphones have revolutionized the way those images are captured, and by whom. Which makes it ironically apropos that perhaps the first images of Apple founder Steve Jobs’s youngest daughter, Eve Jobs, walking the runway in Paris were captured on precisely those same phones that helped make her father’s brand iconic.”

The New York Times has published a report about the difficulties that have arisen with thousands of novice cyclists hitting the city’s new cycling lanes without always paying attention to the rules. Titled “As Bikers Throng the Streets, ‘It’s Like Paris Is in Anarchy’, the article says that “an ecologically minded experiment to make Paris a cycling capital of Europe has led to a million people now pedaling daily — and to rising tensions with pedestrians.” (Electric scooters are a big part of the chaos.)

Former French President Nicolas Sarkozy was found guilty of illegal campaign financing in his failed 2012 re-election bid and sentenced to one year of prison, but it’s doubtful he’ll serve time. As reported by Reuters, “Sarkozy, 66, is unlikely to go to jail. He decided to appeal the sentence, a move that in effect suspends it, and the judge said he could serve the sentence at home with an electronic tag.” Sarkozy denies wrongdoing but “the two convictions could force [him] to play a more discreet role in next year’s presidential election. He had not planned to be a candidate but, as a popular figure on the right, he would be expected to support his party’s candidate.”

Speaking of scandals… The Paris literary world has been rocked by it. As reported by The New York Times, “The Goncourt prize, a standard-bearer of the French novel known for its probity, has come under criticism over charges of conflict of interest after a juror voted to include her partner’s novel in a list of contenders.” And more: “Most Septembers, as French publishers release their most promising books and start jockeying for prizes, the world of letters is engulfed in the Left Bank’s version of the Ultimate Fighting Championship.”

Meanwhile treatment for psychological problems will be funded by France’s government starting next year, reports The Washington Post, as announced by President Emmanuel Macron last week. To quote: “French health professionals say a national effort to improve access is long overdue, especially as the coronavirus pandemic has caused and aggravated psychological distress.” Macron acknowledged “both the psychological impact of government virus restrictions and past government failures to make mental health a priority.”

And speaking of Macron, “a Brazilian Indigenous leader is appealing to France’s president to use his global sway to fight the deforestation of the Amazon,” reports ABC News. “Ninawa, a leader of the Huni Kui people who uses just one name, delivered a letter on Saturday to the office of French President Emmanuel Macron. He urged the French leader to lean on the whole 27-nation European Union to limit trade linked to deforestation. His appeal also called for pressure on Brazilian President Jair Bolsonaro to halt logging, farming and development projects that are destroying the Amazon rainforest.”

The Red Wheelbarrow Bookstore: Bigger and Better Than Ever!