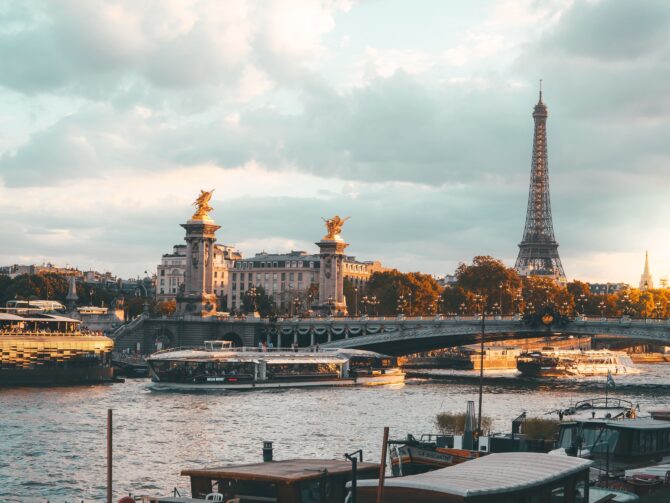 Parisians are up in arms about a plan to chop down 42 trees, some of them between 200-100 years old, at the base of the Eiffel Tower to make room for a bagagerie and tourist facilities. A petition quickly gathered 35,000 signatures to protest the plan, and circulated widely. “SCANDALEUX !” voiced journalists, urban planners, and local residents on social media. The city had said they would plant 222 new trees to replace those felled, but environmentalists have pointed out that century-old trees (arbres centenaires) are irreplaceable in terms of carbon capture, the shade provided, etc.- they can’t just be replaced by a sapling. In response to the controversy, the mayor’s premier deputy Emmanuel Grégoire tweeted that City Hall promises that no “arbre centenaire” would be removed.

May Day isn’t May Day in France without labor protests. After all, le premier Mai isn’t just about the floral tradition of giving muguet bouquets (lily of the valley), it’s also the fête du travail (International Worker’s Day), an important holiday marked by annual labor demonstrations. This year, in a test to newly reelected President Macron, the rallies were centered around salary increases to combat inflation and consumer’s precarious purchasing power. And as explained by Reuters, hard-line unions like the CGT continue to protest Macron’s plans to raise the retirement age to 65 from 62. Violence broke out at some of the demonstrations, which were infiltrated by anarchists and casseurs, the usual suspects who disrupt manifestations with destructive behavior.

The ephemeral restaurant terraces are back! What started as a pandemic measure to support struggling restaurants — allowing them to increase diner capacity by taking over sidewalks and parking spaces — has become a permanent measure. During the warm-weather season, from April through October 31, restaurants are allowed to enlarge their terraces as long as they file for the proper permit with the city. The rule is that the merchants must respect a mandatory closing at 10 p.m. to respect the tranquility of local residents. According to the official city website, “The new regulations for terraces attach particular importance to the aesthetic quality and overall coherence of the public space on which the terrace takes place. Summer terraces can consist of tables, chairs and parasols. Any other form of furniture, in particular greater than 1.30 m in height, is excluded in order to avoid cluttering the public space. Vegetation is strongly encouraged…”

If you’ve walked by the Stravinsky Fountain outside the Centre Pompidou recently, you may have noticed it desperately needed a makeover. Good news: after 40 years, the famous fountain is finally getting a renovation. The fountain is made up of 16 sculptures: seven mobiles by Jean Tinguely, six colored resin figures by Niki de Saint-Phalle and three sculptures created jointly by the two artists. These works of art, themed according to the Rite of Spring ballet, pay homage to the composer Igor Stravinsky (1882-1971) whose name the square bears. For this project, the restoration of these 16 statues will be entrusted to specialized conservators-restorers. The hydraulic, mechanical and electrical systems as well as the sealing of the basin and the stainless steel bench will also be refurbished. The expected completion will be spring 2023.

A fascinating recent Bloomberg CityLab article, entitled “Europe’s Noise Capital Tries to Turn Down the Volume,” takes a look at the harmful effects of urban noise pollution and new measures Paris has implemented to combat the problem, including the installation of automated sensors and “sound radar.” (Offending vehicles have their license plates photographed. In 2023, the city will begin fining drivers 135 euros if their vehicles break certain noise levels.) Read the full article here.

Cars on the Champs-Élysées © TRAVELBLOG at Pexels

Have you ever seen the full moon perfectly positioned through the Arc de Triomphe, in line with the Avenue des Champs-Elysées? Could there be a more stunning way to see this iconic Parisian monument? Astrophotographer Thierry Legault captured the incredible scene last month. Check out the photo below.

Paris, April 17 2022: the full Moon rises in line with the Arc de Triomphe and the Avenue des Champs-Elysées 🤩

It’s a single exposure: no stacking, no assembling, no tampering…as close as possible to the real scene 😊

We’ll leave you with a video by France 24 about the guardians of the River Seine: “Meet those who take care of the Seine seven days a week, from the technicians checking water quality to members of the river patrol, who respond to emergency call-outs and use radar to explore the river’s depths.”

Previous Article Flâneries in Paris: Explore La Madeleine and its Environs
Next Article The Best Places to Shop for Flowers in Paris