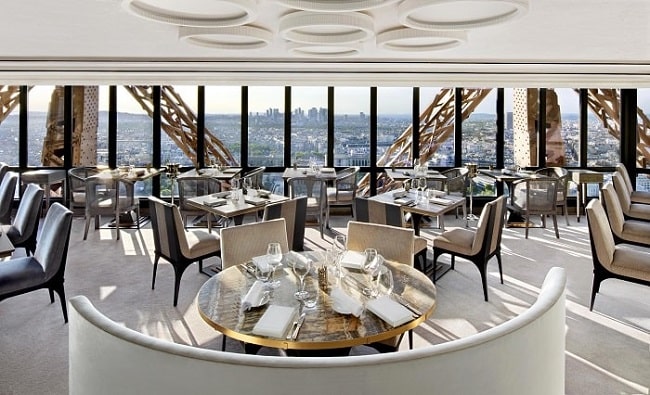 According to award-winning chef Frederic Anton, his ambition for the recently refurbished Jules Verne restaurant is to guarantee it becomes the singular “must-visit gourmet destination in Paris, at the top of France’s most emblematic monument.”

It’s a promise as lofty as its Eiffel Tower location, hundreds of feet above the ground, but Anton is determined to keep it – and indeed, as far as luxury dining in Paris is concerned, there’s no hotter spot in the city right now. If newspaper reports are to be believed, the restaurant’s reinvention followed a catastrophic clash of culinary egos, culminating in Alain Ducasse’s dramatic “eviction”. While the messy tabloid-style lawsuit gave rise to visions of kitchen knives at dusk, all the scandal shouldn’t overshadow what has become one of the industry’s most tasty transformations.

Guests are invited via their own private elevator, which will whisk them straight to the second floor of the Eiffel Tower without the need to join the inevitably large line of sightseers first. Anton will be there in lightening fast time, too – the former Masterchef Francais judge divides his time between Le Jules Verne and the renowned Le Pré Catelan restaurant in Bois de Boulogne thanks to his handy electric scooter. His triple Michelin star status, plus his team of expert sommeliers and chefs (including Thierry Marx of Sur Mesure at the city’s Mandarin Oriental hotel) complete the picture. This team ensure that diners are in good hands.

Be prepared to gasp as the sophisticated simplicity of the dining room first comes into view. The vibe here, recently brought to life by designer Aline Asmar d’Amman, is not about glamour and garish furnishings, but totally under-stated sophistication, therefore allowing attention to be directed to the main attraction – the panoramas outside. This décor has little in common with the lavish dining spaces of Paris’s palace hotels such as the Shangri-La and the Ritz. Plus there are no intricate frescoes, traditional crystal chandeliers nor even elaborate modern flower walls to take in. There are, on the other hand, sleek reflective mirrors providing diners with a visual echo of the city, and windows featuring panoramic views of the capital 410ft below. While a passion for palatial opulence is understandable – especially in a city so synonymous with glamour – with this city skyline as a backdrop, extra sparkle just isn’t strictly necessary.

No doubt this was D’Amman’s reasoning. She had previously renovated the suites at former royal residence Hotel de Crillon – the location outside which Marie Antoinette was brutally executed – so she is accustomed to designing spaces in which there are plenty of legends to live up to. Le Jules Verne, for its part, was named after the French author of the same name – besides William Shakespeare, the second most translated novelist in the world. In spite of all this history, the restaurant might be less about filling your Instagram feed and more about switching your phone to silent and drinking in classic Parisian style views… perhaps with the assistance of a vintage wine from the unparalleled on-site cellar?

Before too long, an amiable waiter will arrive to break your hypnotic gaze towards the scenery outside and start to serve. The cuisine has a lot to live up to in order for diners to be as entertained by its aesthetic and taste as by what they see outside. Yet the team is up to the challenge. The famous option is the five or seven course tasting menu, which is available both for lunch and dinner, and offers up dish after dish of culinary extravagance.

The previous menu, during Alain Ducasse’s lease, had included dishes infused with absinthe – Francophile Dita Von Teese‘s favored tipple of choice to cook with – and desserts drizzled with rooftop honey from local bees. It was an eclectic mix that might have been hard to beat, but the menus have since been overhauled with a new emphasis altogether and now boast a fruity, tangy vibe. For instance, the mouth-watering scallops and caviar dish contains a hint of tongue-tingling lime zest, the chestnut dish balances the sweetness of its vanilla cream with a generous dose of citrus zest and even the chocolate in the final dessert dish is infused with a sharp sorbet. The theme is all about that combination of sweetness and sharpness to set your tongue alight.

A more modestly priced menu is available from Monday to Friday with an emphasis on seafood such as salmon and cod, plus delectable duck. While a little more down to earth than the specially selected tasting menu, it still demonstrates the Jules Verne signature style. The highlight for sweet-toothed visitors is the “chou puff” dessert with Madagascan vanilla cream and warm chocolate.

Wedding proposals have already taken place here against the twinkling lights of the Parisian night sky – and while dining at Le Jules Verne could easily appear to be an over-priced and underwhelming cliché, accused of capitalizing on its location alone, it has actually been renovated to great success, in contradiction of its critics. Yes, it will always be a bit of a cliché – the obvious choice for any Paris-bound romantic or lover of luxury – but some clichés are not to be missed. Its popularity is for good reason, so it’s well worth clearing some space in the budget for what promises to be a truly special meal. Make a date in your diary! 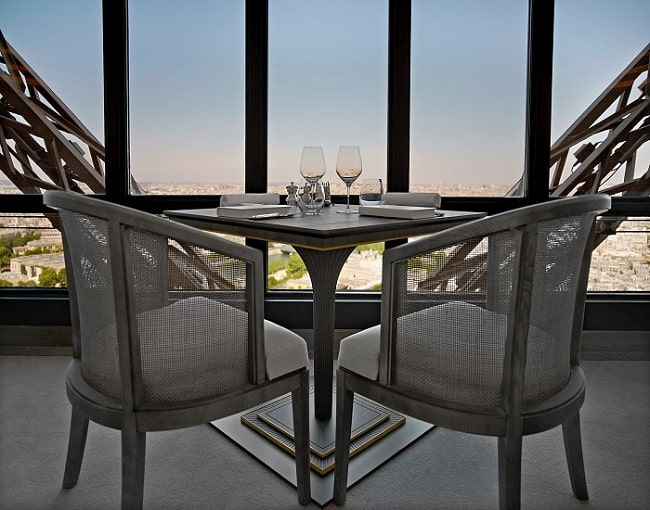 A copy of author Jules Verne’s Twenty Thousand Leagues Under The Sea is an optional extra. Enjoy! 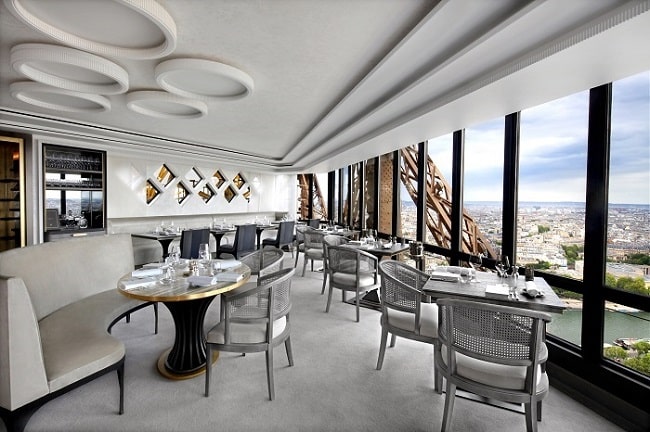