The Buzz in Paris: Rooftop Beehives, Honey and Urban Beekeeping

What do some of the historic rooftops of Paris have in common with the labyrinthian secret passages below the city? Apiculturist Audric de Campeau knows the answer… because he lives it.

As an urban beekeeper, his work takes him both above and below the city—from combs to combs (honeycombs to catacombs).

His beehives sit atop many Paris monuments, and his honey wine—called hydromel or mead (much like Sauterne)—ages in the dark, damp carrières (quarries) beneath the city.

There are several well-known beekeepers in Paris, but Audric is quickly gaining attention as one of the local experts.

He cares as much about the bees as he does about the honey they produce. He is dedicated to creating a range of quality products from the hard work of his colonies (pure honey, honey nougats, honey candies, and hydromel… with more surprises to come). 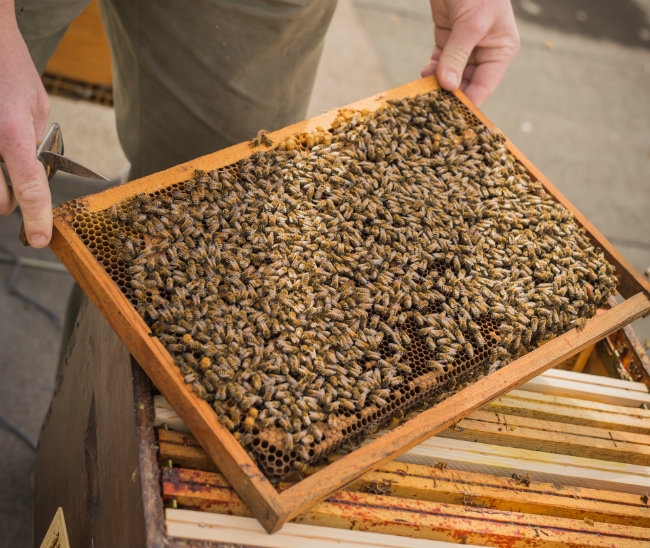 A Paris History of Bees

Honey hasn’t always claimed headlines in Paris, but bees have been a part of the city’s history for hundreds of years (as a symbol of immortality for French rulers, a sign of agricultural strength, as well as a tribute to honey production).

If you’re a Paris flâneur, you may have walked by the beehives tucked away in the southwest corner of the Luxembourg Gardens. These traditional wooden hives are part of a beekeeping project that began in 1856, followed by a beekeeping school that is still active today. 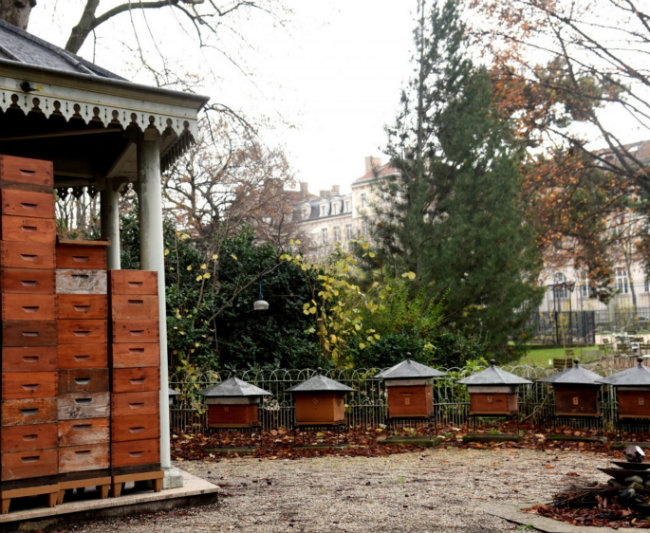 You may have also heard of the hives that have thrived on the roof of the Opera Garnier, tended for many years by Jean Pauchton, a former set designer at the opera.

Now, however, bees are all the buzz. In a city such as Paris, where gardens are a tradition and where residents tend to make the best use of vertical space, Paris honey is in.

More than 700 hives exist in Paris, usually removed from well-traveled tourist areas. But you might be surprised to find hives at all these major landmarks (mostly on rooftops):

Even hotels and restaurants are jumping on the beewagon. The Tour d’Argent restaurant, the Mandarin-Oriental, and The Westin Hotel (on rue de Rivoli) all have hives that provide an exclusive supply of honey to their chefs. 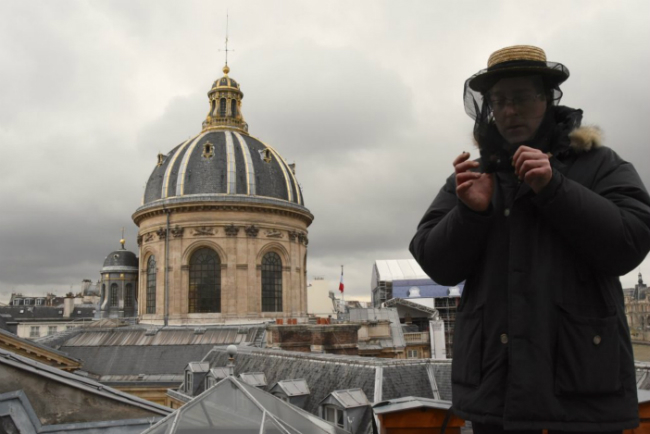 Bees seem to love living in Paris (don’t we all). The wide variety of flora, the frequent plantings in the city’s gardens (and private flower boxes), and the lack of pesticides allow bee colonies to prosper—a hopeful sign when bees in the countryside are declining, threatening the pollination that is necessary for agriculture.

Honey in the Blood

Audric de Campeau admits he must have “honey in his blood.”

At an early age, he seemed to know the power of honey. He started as a young farmer (outside of school hours, of course), growing grapes in the Champagne region at his family’s country home. However, he was soon captivated by the magic of bees.

His curiosity and dedication won his parents’ permission to experiment in apiculture, even though his father was allergic to bees. He quickly became proficient at honey production, and, soon, his parents urged him to start selling his products, diplomatically mentioning that they could not keep up the pace of eating a kilo of honey at day. 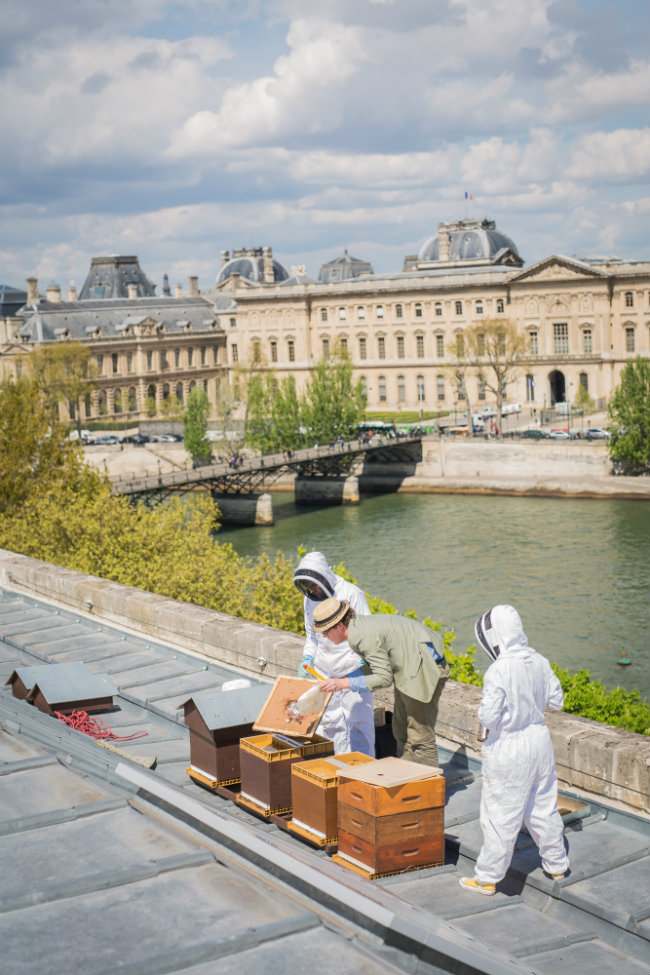 An “office” in the sky. Photo © Le Miel de Paris

Audric’s love of history and architecture led him to target Paris landmarks for his hives. His understanding of nature informed smart location choices near gardens like the Tuileries, which he calls “a fully-stocked fridge” of diverse nectars and pollens that bees need.

His knowledge of the less traveled paths of Paris (as well as some wild underground escapades as a student), also led him to the catacombs for a dark, damp, vibration-free place to age his honey wine. Every part of his apicultural life has a raison d’être. 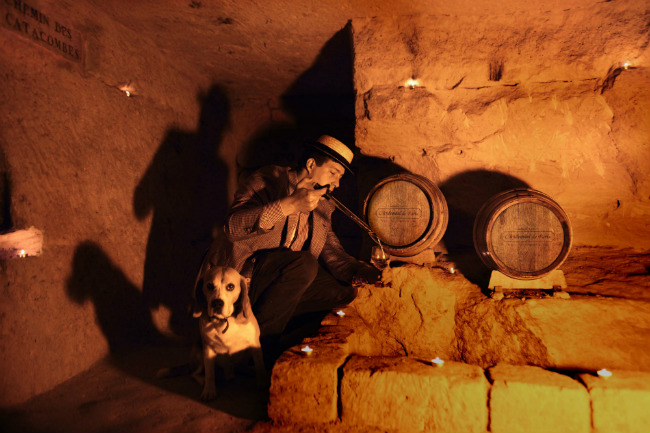 In the catacombs for the aging of the Hydromel. Photo © Brice Agneli

He is an original. He eschews the traditional white beekeeper “spacesuit,” in favor of a stylish boater with a custom-designed black face net (and no gloves!)

He is always with his trusty beagle assistant Filou (although Filou smartly keeps his distance from the hives). 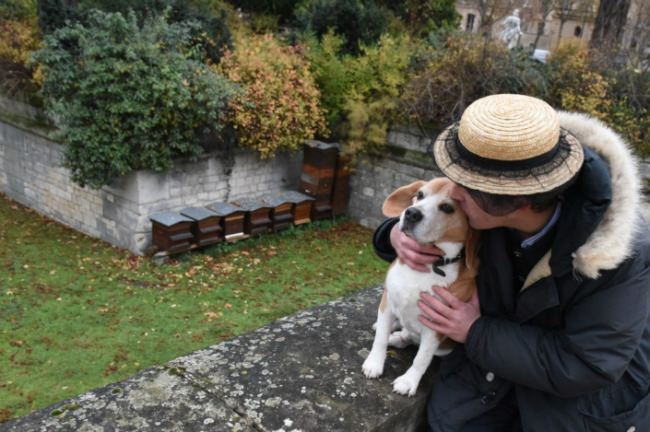 Audric and Filou at the Invalides hives. Photo © Meredith Mullins

For Audric, it’s a matter of sensing the mood of his bees. “You have to be quiet and calm when you’re working with a hive,” he says. “If you’re anxious, they feel it . . .  and they might kill you. It’s a good way to keep your stress level down.”

Audric knows his bees, but he is also a master of marketing, with his beautifully designed black and gold bee-hive like packages for his honey, candies, and hydromel; with his wide distribution of Le Miel de Paris to major museums and shops; and with his insatiable desire to add new and interesting products to his honey line. 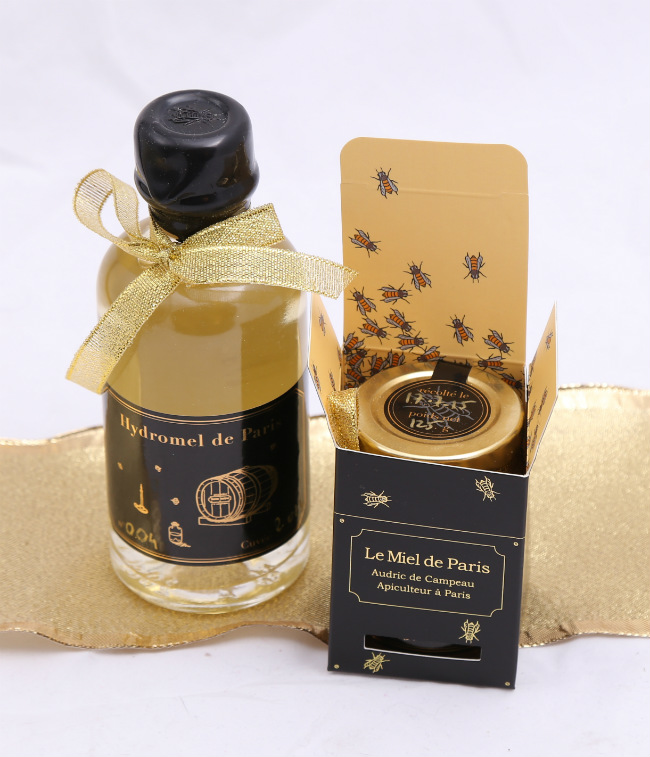 But most of all, he understands that each hive is its own universe, a treasure that has its own place in nature—a place to be respected.

He gives us a reason to bee-lieve. 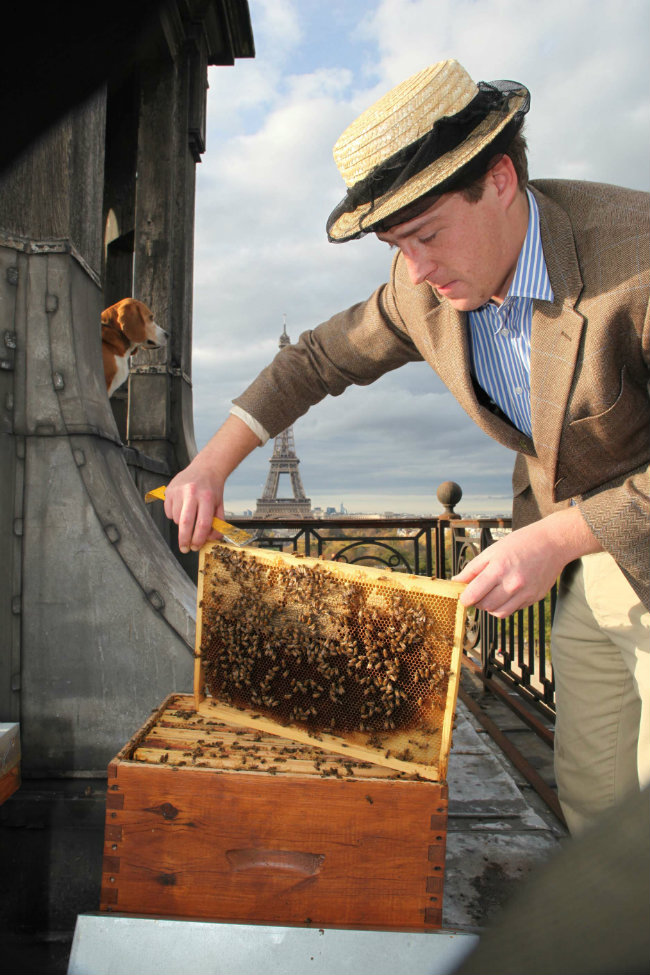 Previous Article Chef Yannick Alléno Hosts a Truffle and Wine Festival at Pavillon Ledoyen, Paris
Next Article Living on a Converted Barge in the Center of Paris