Living on a Converted Barge in the Center of Paris 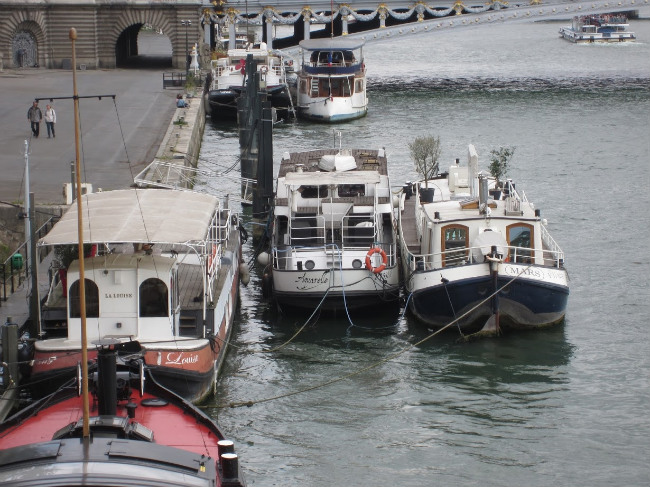 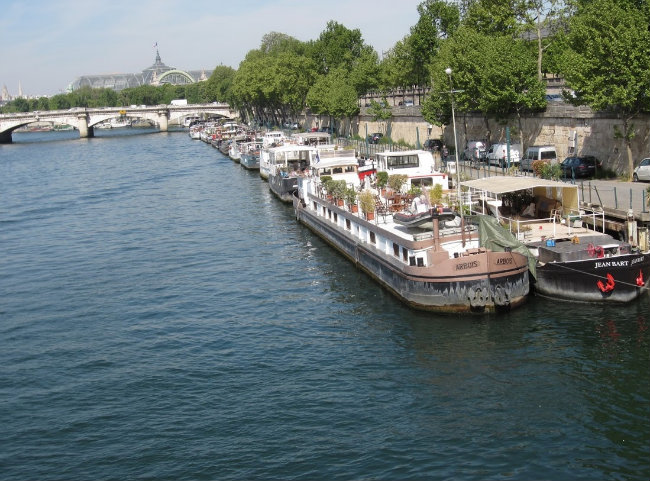 The nine suitcases tumbled off the Air France carousel. Add my carry-on and Luke’s dog crate and my bichon and I were ready to begin our adventure. David patiently loaded our gear into his Ford RS2000, silently calculating how he would transfer them onto the Berreti and where we might possibly find places to store all my stuff. Thrilled that his girlfriend and her puppy were moving to Paris to live with him, he wasn’t sure he had cleared enough room for them on his 25-meter (75 foot) péniche, moored on the Right Bank in front of Place de la Concorde. 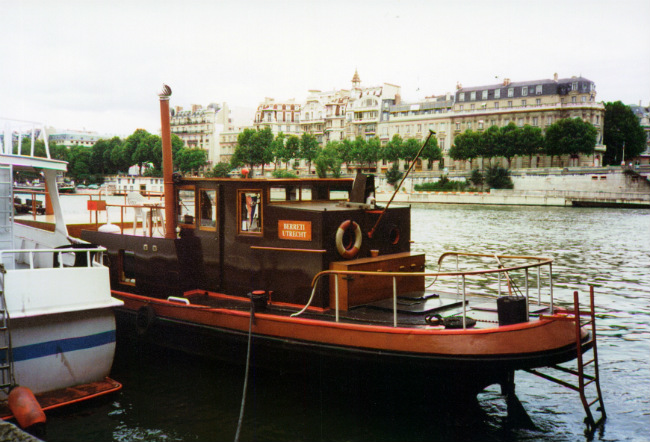 The Berreti in the 1990s. Photo: Roni Beth Tower

I was nervous too. I had first discovered his boat nearly two years before, the weekend when I met David. Since then, our midlife love affair had included not only his 14 trips to the United States, but also my 10 return visits to Paris, all over a period of 22 months. I stayed with him on the Berreti during visits as short as three nights and as long as the luxurious two weeks in July the previous summer. That was the trip when we had intended to travel the waterways, only to discover that frozen pipes the previous winter had damaged the diesel engine. David had unhooked water, electricity and phone lines and, after he cast off the ropes and had us heading upstream, he invited me to drive. As I steered the boat eastward under Pont Neuf, alongside Notre Dame, past Ile St. Louis, David monitored the needle on the heat gauge as it rose into the red zone.

“It’s moving a bit too rapidly. Either the gauge is broken or the engine is overheating.  Maybe the winter freeze did some damage to the motor. I need to take the wheel.” 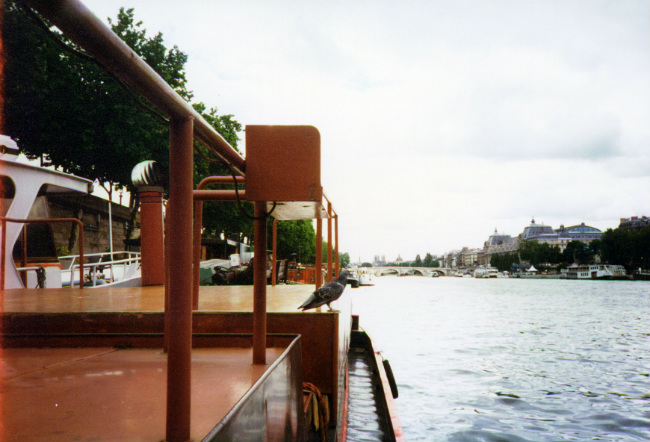 He steered us to the bank of the river and tied up alongside the Jardin des Plantes. He knew that getting help on the long Bastille Day weekend would be difficult to impossible. After our picnic lunch on the quay, he made a U-turn and guided us back to our parking spot, moored alongside the yacht Christina, as the Orangerie cast a gentle shadow on that late afternoon. I never did get to explore France from its waterways, navigating through locks and discovering riverside villages, as David had done with his sons every summer over the previous 16 years. 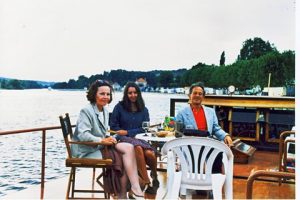 On the Berreti with Leslie Caron

David lovingly took care of the basic needs of his barge. He polished the brass fittings and buffed the pine paneling that had been salvaged from a 200-year-old Dutch church when the boat, built in Utrecht in 1928, was converted from a working barge in 1967. He ran the motor at regular intervals to recharge the batteries for the 24-volt internal circuit, the only source of electricity when the boat was disconnected from the electricity supplied on the quay, and kept an eye on the propane gas tanks that needed periodic replacement as well as the fuel oil tank for heating, deliveries made from the river. He faced the constant challenge of finding artisans who could repair a leak in the roof, a broken toilet pump, the pipes and radiators that had burst  the previous Christmas when he had spent two weeks in the USA with me and Paris had suffered an unusually lengthy cold spell. He watched the level of the Seine so that he could rearrange the ropes that moored the boat to the quay as needed and, when the river threatened to overflow its banks, he moved his car to higher ground and rigged a rope system to ferry the rowboat to the quay, so that when the Seine overflowed he could make his way to the office by an alternate route – down from the barge to the rowboat to the quay, up the ladder to Place de la Concorde, then on to Boulevard Malesherbes. 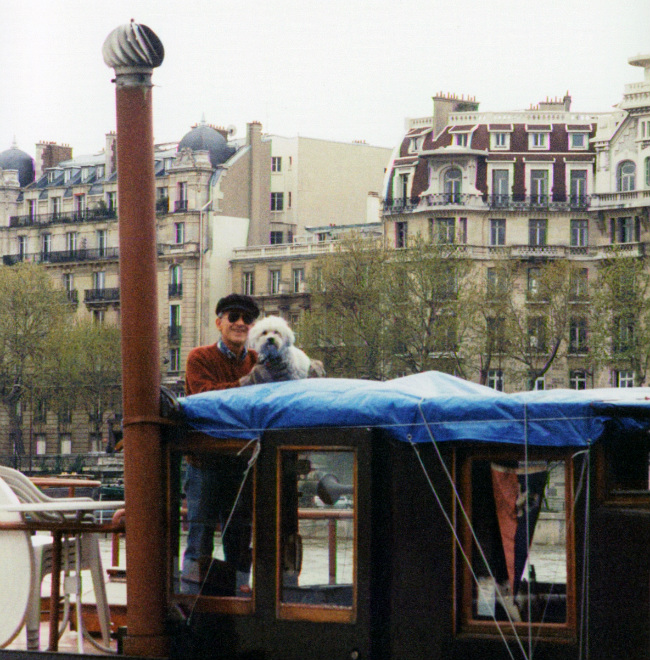 After we agreed that I would move to Paris, David carted bags of clothing and cartons of books from the Berreti to the American Church in Paris for their annual rummage sale. He moved personal and professional papers to his office for confidentiality. He carefully measured the space on a shelf along the lengthy corridor from the living room to the captain’s sleeping cabin, and went to BHV where he purchased four unfinished three-drawer wood pieces. In an act of love, commitment, and insanity, he carried the four small but very heavy chests, two tied together and hanging from each arm, all the way home, from BHV to his boat, the length of the Seine from the Hotel de Ville to Concorde. (He admitted his arms were sore the next day.) By the time I arrived a week later, the four little drawer units formed a bank of orderly personal protectors awaiting my most private belongings. They looked like built-ins. In the weeks that followed, I located Styrofoam insulation at Castorama, the Home Depot of Paris, installed it behind them, and attached a border of colorful fabric to the edge of the shelves where they sat. I had always found decorating irresistible. 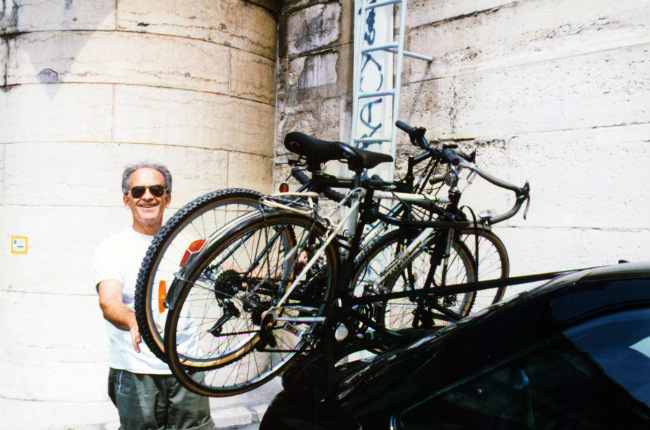 When I moved to Paris to live with David, bringing Luke along for his first encounter with the culture that was in his bichon DNA, I had left most of my real furniture and other belongings in my Connecticut house, watched over by my responsible adult daughter.  I was not ready to sell our home until I knew that David and I, in our fifties, somewhat set in our ways, and adapted to very different cultures, could actually live together in relative harmony. In a small space. On a houseboat.

That Sunday morning in January of 1998, we arrived at the entrance to the quay, just before Pont Alexandre III. David drove his car down the ramp and over the cobblestones and parked it on the quay alongside the Christina. We transferred my belongings onto the Berreti. David tucked Luke securely under his arm and carried him into the driving cabin. I joined them. My puppy and I were home.

This was Luke’s first visit to the boat. His intense curiosity took over and he sniffed each nook and cranny. He scampered down the staircase to the kitchen and then two more steps to the living room, where he was intrigued by the brick fireplace with its wrought iron hood, the exotic furnishings, and the trunk filled with bottles of liquors from regions across France. He needed a week to learn how to jump up onto the unusually high built-in bed, accessing his own special nook beneath an underhang, by himself. He slept alongside us at night. Initially, he feared climbing the difficult steps from the kitchen to the driving cabin. We knew it was their surface rather than their lack of a back when, with David’s assistance, he hopped right up the open iron rungs of the ladder that joined the quay to the sidewalk above. He instinctively knew when he needed to be carried – along the plank from the Berreti to the Christina, onto the quay, through the intersections at Place de la Concorde. He learned to identify sounds of our comings and goings when he was left behind and gleefully welcomed us home. His street smarts were no less impressive:  David taught him to wait for permission at crosswalks, to avoid tangling pedestrians in his leash, and to keep to one side past all sorts of sidewalk attractions and distractions. His finest accomplishment, however, was learning to be off the leash and run at full speed in the Tuileries, the Invalides, along the Cour de la Reine. Unless it was his admirable manners in restaurants. Not surprisingly, he loved the latter, especially when a waiter would ask, “Would monsieur prefer red meat or white? Haricots verts or frîtes?” He usually got both. 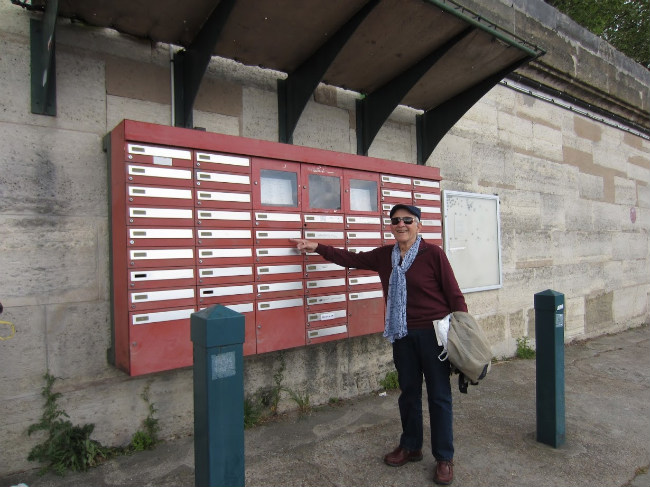 On a recent trip to Paris, showing off the old mailboxes for the boats. Photo: Roni Beth Tower

I was surprised how much I loved living on the relatively small barge. Each challenge had its overriding benefit:

Implicit in our commonality were two truths. The first was obvious: The natural beauty of light and water nourish the soul. The second was subtler, but perhaps more essential: Permanence is an illusion; change is continual; to live clinging to a false sense of security confuses the roots embedded in personal histories with destinies written deep into each soul. Our home was movable. Living on the Berreti brought perspective and gratitude, even as we sometimes struggled with space, organization, maintenance, and logistics.  Isn’t engaging the process what makes life worthwhile? And, for David and me and for Luke, what made our life so much fun.

Author Roni Beth Tower will be leading a discussion “Love When You Least Expect It” at the American Library in Paris at 4:30 PM on Sunday, February 11th, just in time for Valentine’s Day. And she will be speaking about her book at Adrian Leeds’ Après Midi on February 13, 2018. You can visit her at www.miracleatmidlife.com 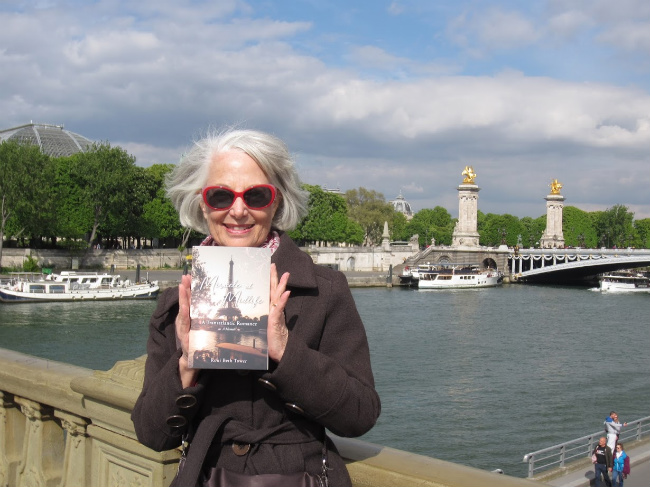 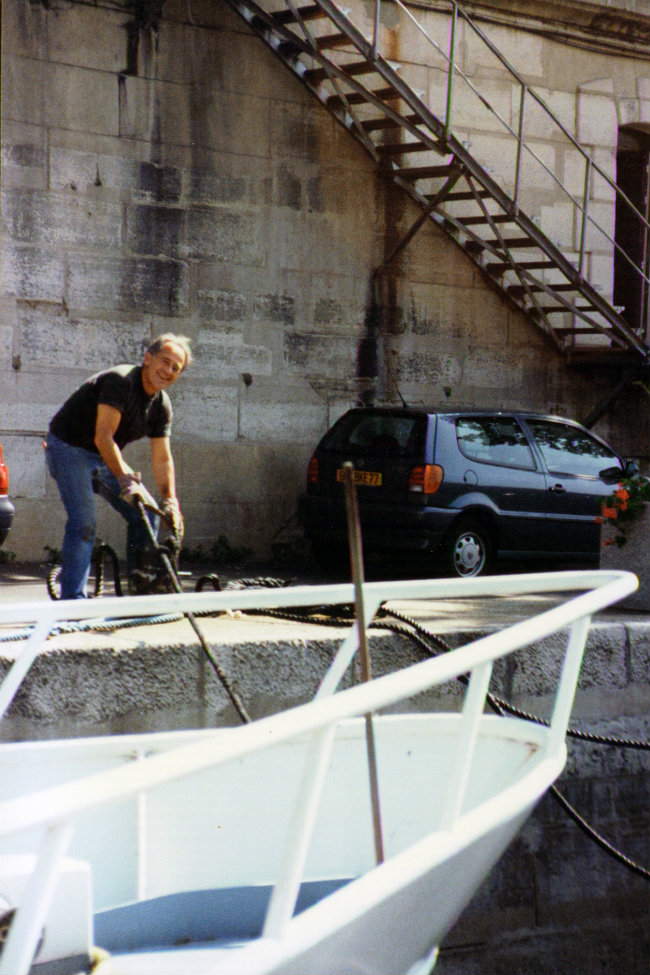 Previous Article The Buzz in Paris: Rooftop Beehives, Honey and Urban Beekeeping
Next Article Biking in Paris: The Scoop on the New Vélibs