A Day in the Life of Celebrity Chef Thierry Marx 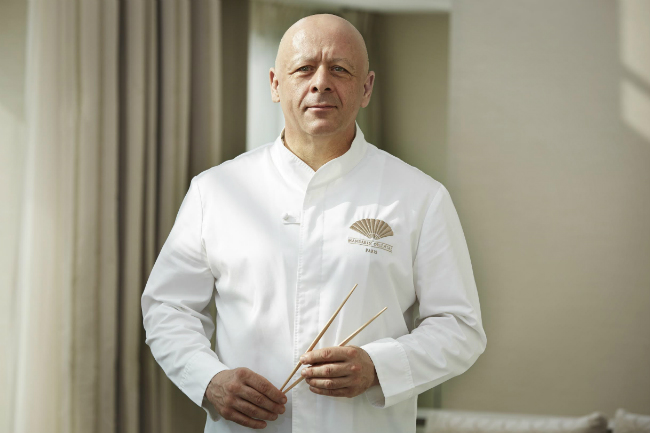 Chef Thierry Marx is an inveterate, insomniac flâneur. He’s also an observer with a sharp eye for the avant-garde in his cooking and daily life.

As Executive Director of the eateries at the Mandarin Oriental Hotel, Paris (including the Michelin two-starred Sur Mesure and Camelia), Marx heads two of the capital’s top gastronomic restaurants. “My job definition is a quote from a Japanese Master: Cooking, is for looking at, meditating on and eating,” he says.

Marx has created a style of cooking some would refer to as molecular. He calls it “innovative”. He explains, “I’m inspired by the Japanese approach to cuisine of deconstuction/ reconstruction.”

“In France, chefs are not adventurous enough. While I respect the classics of French cooking, I like tasting new flavors and looking to the future, not the past. What I’m trying to do is set French cooking free from its bourgeois cage.” 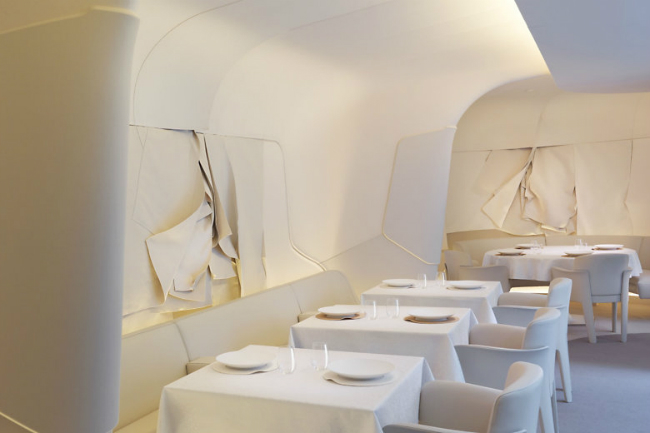 Marx– who zig-zags around his beloved Paris on a BMW bike (“I’ve ordered a Ducatti, very exciting!”)– is as likely to wear a judo kimono as chef’s whites. The black-belt, martial arts fanatic teaches at The Judo Institute, Paris. Several months each year are spent studying cuisine and martial arts with Japanese teachers. “The most rejuvenating place for me is Kyoto and its temples,” he says.

He won two Michelin stars for his innovative cooking at the Château Cordeillan‑Bages in the Bordeaux region. He’s also written several books, and recently published “Paris Marx Saveurs Capitale” (Flammarion) which is a goldmine of confidential addresses found during his strolls around the city.

Gilles Pudlowski, French gastronomic critic, regards Marx as a Jewish samurai, combining east and west. “He’s very different from all the other chefs, probably because of his background, I know he used to speak Yiddish with his grandfather, whom he adored.”

“This is an exciting time to be cooking, because there’s so much experimentation going on,” he says. He says he can form a baker in twelve weeks which he does at his école de boulangerie in the 20th arrondissement, and also in the laboratory of his recently opened organic boulangerie. “Bread is the basic necessity, the staff of life,” he reflected last week at the bakery created with MOF Master Baker Joël Defives, his BF from their days as “Compagnons de France” working their way as apprentices during a Tour of France. Decorated by Mathilde de L’Ecotais, the boulangerie has a New York vibe with a huge, oak table and motor bike saddles on which to sit. The menu is eclectic with Marx’s creation of “Breadmakis” (sandwiches) alongside traditional baguettes and mouthwatering croissants, tarts, pies, and pastries. 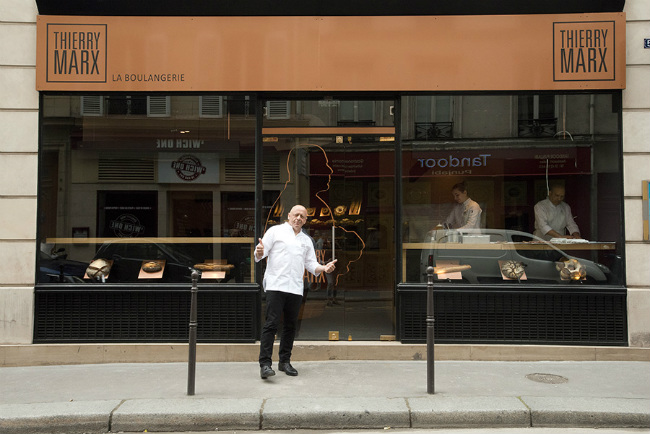 Marx is not sure why his culinary career has taken such a revolutionary road. “Maybe it’s the name,” he jokes.

Born in 1961, Marx grew up in Belleville, a tough multi-ethnic neighborhood where his father was a baker. He was raised mostly by his grandparents; his grandfather Marcel Marx, a Polish refugee and communist, introduced him to martial arts for self defence. “I was nul at school,” he admits.

At 16, he joined the French Army and saw action in Lebanon as a parachutist, then returned to France and trained, with the Compagnons, as a pastry chef. He honed his craft in Japan (always eating with chopsticks) and top French restaurants, including Joël Robuchon‘s, where “I would stay really late copying his amazing recipes.”

Then followed travels with a backpack, absorbing inspiration in Australia and Asia. Eventually he returned to Bordeaux and, ultimately, Paris.

Sur Mesure is a sensory experience showcasing Marx’s considerable technical skills. And, if he could be a dish? “I’d be soy risotto. Soy is the most neutral product that exists. But very Asian so, for the French twist, I add truffles and cèpes”.

Cooking, he insists, must be a pleasure. “Even if we use new cooking techniques, we must combine tradition and innovation”.

At Mandarin Oriental guests can participate, and be welcomed, in a “Paris by Marx” concept discovering his “coup de coeurs” (favorite addresses) such as the unique cookery supply store E Dehillerin (founded 1820); La Maison Verlet, the rare coffee and tea merchant; Alain Huchet, the gastronomic bouquiniste on the Quai de Conti; Jugetsudo for tea; Le Comptoir de la Gastronomie, for stocking up on groceries; Marché Poncelet (17th) for strolling; and the Left Bank gallery Marie Laure de l’Ecotais, for checking out contemporary art and sculpture. Not forgetting a private visit to La Boulangerie, bien sûr!

Previous Article Down Under at the Palais Garnier Opera House
Next Article Not-to-Miss Exhibit in Paris: The Open-Air Studio, Impressionists in Normandy