Born in Firminy to a family of restaurateurs, Cédric Grolet knew from a young age he wanted to follow a career in pâtisserie, starting his first apprenticeship at the age of just 13. After years of training, and time spent perfecting his skills with Fauchon, he joined the Parisian palace hotel Le Meurice, quickly working his way up to head pâtissier. Bonjour Paris caught up with Cédric to find out more about what inspires his pâtisserie, his expert tips for baking at home, and his favorite Paris haunts.

Can you tell us about how you came to be where you are today, and what inspired you to follow a career in pâtisserie?

I have a particular memory that will remain engraved in my mind forever, when my grandfather showed me how the ice-cream machine works at the age of 6. He made me touch the vanilla ice-cream with the tip of my finger, which melted instantly. I was fascinated. I think that was the moment that I wanted to work on that kind of thing; I wanted to make cakes. I did not even know then that the profession of pastry cook existed.

Do you have any dishes from childhood that you still love to eat now?

I am fond of simple cakes and desserts. For example, crème brulée or crème au caramel remind me a lot of my childhood.

You’ve had an illustrious career, winning various awards and working around the world with Fauchon before joining Le Meurice in 2011. Are there any particular career highlights that you can tell us about or any moments that have stood out for you?

I do not have a particular moment which stands out, but obviously getting my awards was something special; I’m very proud of it. If I had to quote one it would surely be Best Pastry Chef of the World 2018. I always told my parents “one day I would become the best pastry chef in the world,” so it’s a dream come true.

Your first pastry shop, La Pâtisserie du Meurice by Cédric Grolet, has just celebrated its first birthday. Do you have any other future plans that you can share with us?

I’m going to release my next book in October, the theme is still a secret, but I want to surprise, and to show a different creative side. And maybe also my first address in my name in Paris…

What is the creative process behind your pâtisserie and where do you find your inspiration?

I do not have a creative process; I never sit behind a desk and say I need to create something. I would not be able to do it that way. It is important for me to be free to create; if you force me, nothing comes. I am inspired by absolutely everything that surrounds me – tastes, landscapes, shapes, colors. That’s why traveling a lot is very important to me, it allows me to constantly discover new things.

Where did the idea come for your famous fruits, which have also become a popular sight on Instagram?

It’s a technique that I created, all the fruits are all my creation. I started with nothing. The way to do it, the techniques such as brushing chocolate, carving desserts…nobody before me did that, it’s really a personal creation. Since I was young, especially between the ages of 16 and 20, I used to carve chocolate for fun. It’s something that I really enjoyed doing and still do today. This is how I came up with the idea of sculpting my creations, which would not only be available to my friends and family, but also available for sale. When I arrived at Le Meurice, my project was to work on different seasons, and that’s how I came up with the idea of using fruit. My first creation was tarragon cherry. I introduced it to the hotel manager, Mme Holtmann, during a tasting and she liked it immediately.

Are there any other French pastry chefs, past or present, who you admire, or who inspire your work?

I must mention Mr. Pierre Hermé. I have never worked with him, but he has helped me a lot in my career, in my strategic decision-making and my philosophical choices. We talk to each other from time to time, and he always gives me good advice. He is a beautiful person who I appreciate very much. Christophe Adam and Christophe Michalak for their creative spirit, and also Alain Ducasse, for all the reasons we all know. It was he who pushed me to simplify my creations, to remove the superfluous as much as possible.

Can you share any secrets with our readers for baking at home? Maybe tips on something most of us get wrong, or the one piece of kitchen equipment that you recommend we all have?

Use good products, that’s the secret! Even the best pastry chef will not make a good strawberry pie with bad strawberries.

After working around the world, in locations such as China, Dubai, Morocco, and South Korea, what are your favorite things about Paris and what makes the city so special?

Our dessert culture is unique. When I travel, I almost only taste savory dishes; no other country has this sweet heritage that we have. It’s in our genes: everyone, since they are small, makes cakes; that’s what makes us so unique! 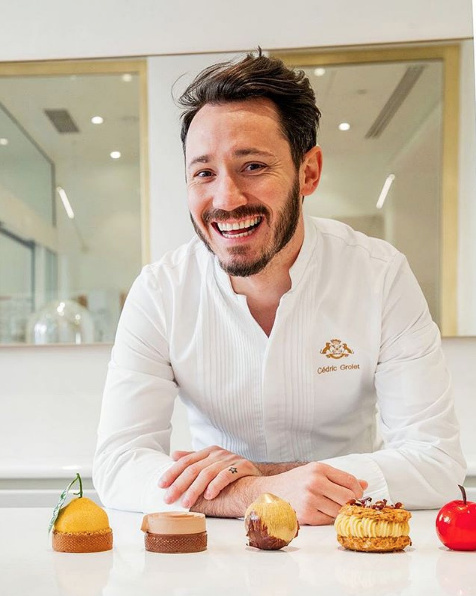 Where is your favorite place to eat in Paris?

Your favorite place for a goûter?

Best spot for an apéro?

On the banks of the Seine, with friends, simple. 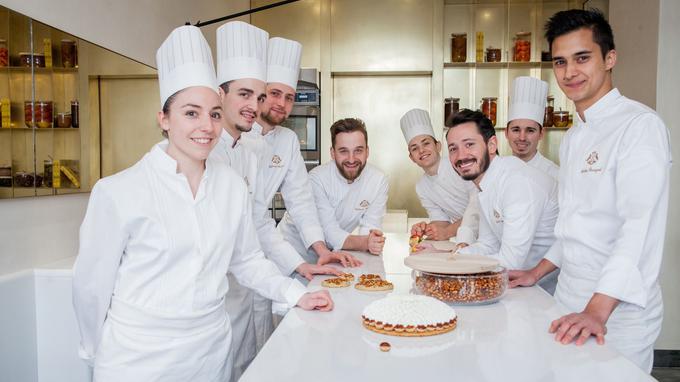 I love my neighborhood, with the Place du Marché Saint-Honoré, the Tuileries Garden and the banks of the Seine nearby. I also like the Marais very much.

Your favorite thing to do in Paris?

To tell you the truth, I work a lot, which leaves little time for hobbies. But since the beginning of the year, I started to get serious about sports. I love going to run in the Tuileries garden and by the banks of the Seine. Paris is a beautiful city; I rediscover it every time.

Previous Article Fabrique de Bouchons: Where to Eat in the 17th arrondissement
Next Article Hotel Hangouts to Mark the Paris Opera’s 350th Anniversary