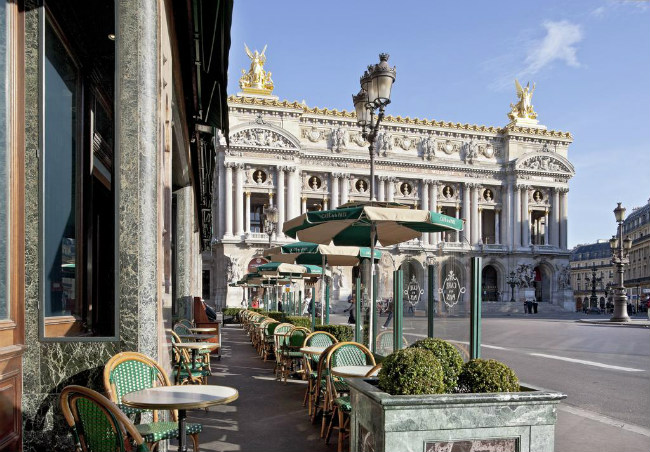 As we celebrate the month of the prestigious Paris Opera’s 350th anniversary – and reflect on the glitz and glamour of last week’s red carpet gala in its name – here are a few ideas for where to stay in the ever-lively Opera district.

For up-close views, there is literally no better place to be. Some in-room balconies look out over the façade of the opera house itself, with the cherubs and gleaming golden statues that crown it clearly visible. Undoubtedly the most Instagrammable location of the district is right here at the window. Elsewhere, expect plush rooms with plumped up pillows bearing the hotel’s distinctive monogram, a picturesque lobby and fine dining. 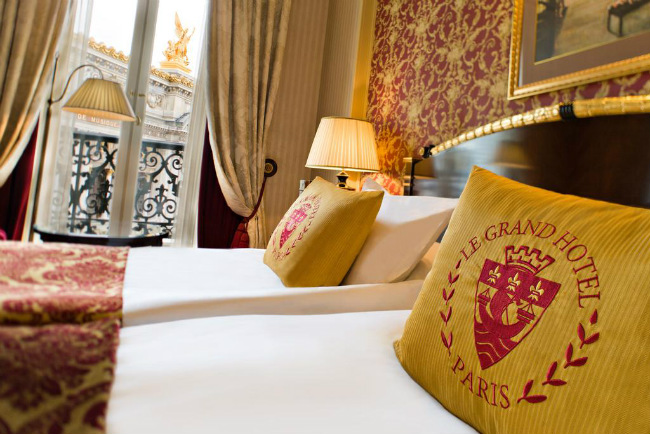 The hotel’s iconic Café de la Paix offers up a slice of authentic 19th century history as a preferred dining spot of Oscar Wilde. Post-prison sentence, he infamously begged his aristocratic ex-lover Lord Douglas for an allowance, but was refused and branded “lazy”. Today, however, some of the city’s best slow-cooked foie gras and chocolate cake can be found here, not to mention a statue of a ballerina in the foyer to mark its association with the opera. Just a single street away is the location where Oscar Wilde wrote Salome, so for literary enthusiasts, fans of elegant architecture or simply those craving opulence, it’d be difficult to top Le Grand. 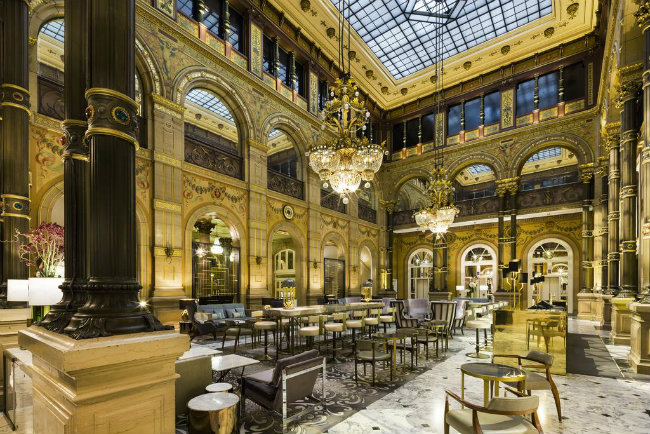 Ideally situated a few minutes walk from Palais Garnier, one of the entrances to the hotel also backs almost directly onto the Saint Lazare rail and metro station. For anyone relying on public transport or expecting to be juggling cases of heavy luggage, this location is extra-convenient. It is also a bustling shopping district, with Paris’s best department stores a short walk away. It might sound like a cliché, but watching the sun set over the city from the rooftop terrace of nearby Galeries Lafayette is still one of the most relaxing preludes to an evening at the opera. Plus besides the trumpet-bearing cherubs that adorn the opera house, the Hilton residence has a slightly cheekier cherub mascot of its own. It exposes its bottom with the same style of humor as Manneken Pis in Brussels – apparently a symbolic message from the artist following an historic row over pay. The glittering Grand Salon is the hotel’s social hub from breakfast time until night, where guests can enjoy cocktails and bites to eat under the light of sparkly chandeliers. Some of the menu choices are a little eccentric – such as salmon marinated with liquorice – but all the classics are available as well. 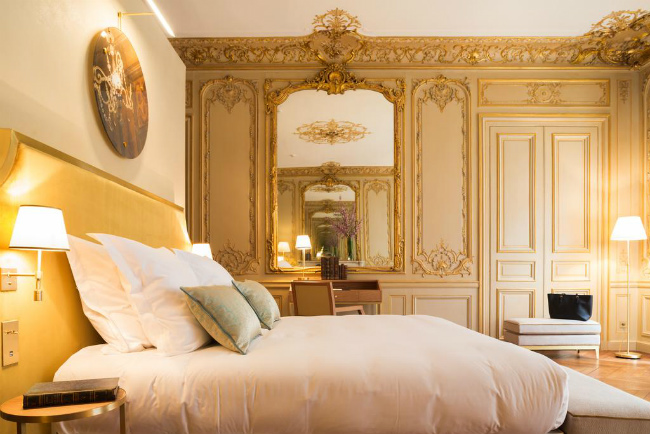 Step through a discreet secret entrance at the side of the lively Rue de l’Arcade to find a recently opened luxury hotel you likely never knew existed. Historically the mansion’s owners, sugar refinery magnates, also owned the majestic Chateau Vaux-Le-Vicomte less than 40 miles from the city. Rich details are on display: sweeping marble staircases, opulent gold décor and even statues depicting Greek mythology. Genuinely warm and friendly staff will regale visitors with tales of this Haussmann mansion’s colorful past. It seems to belong to another era, as if the hustle and bustle of central Paris – though mere footsteps away – is a different world altogether. Set back from the road courtesy of its own private courtyard, it boasts the air of a mysterious country retreat – that is, if it’s noticed at all by the unsuspecting passers-by pounding the pavements each day without so much as a sideways glance. Back in the 19th century, horse-drawn carriages used to travel down this very courtyard, hooves clopping rhythmically over cobbles. For flashbacks to the past in opulent surroundings, this is your best choice. 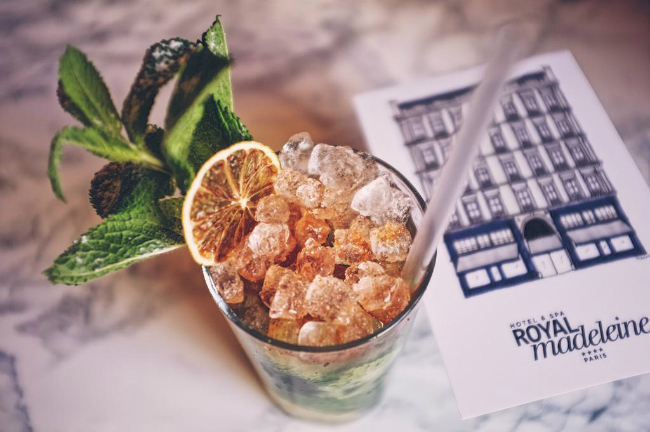 A drink at the Royal Madeleine Hotel

A mere few doors down from the Alfred Sommier hotel is the Royal Madeleine, a more modest alternative with a lower price. While it lacks the palatial elegance of its neighbor, where some rooms mimic suites at the Ritz, it benefits from the same excellent location. Merely a minute away is the Boulevard Haussmann, the famous tree-lined avenue boasting traditional architecture and access to both Galeries Lafayette and Au Printemps department stores. The area is at its best at Christmas time, when windows are lit up by animated figures and shops compete for the most show-stopping store-fronts, each hoping to be the one to persuade you to put your credit card under threat. Yet the boutiques are world-class all year round. Meanwhile the hotel has a self-care theme, offering a spa, a pool and hydro-massage bench, a sauna, a fitness centre with pilates sessions and even a herbal tea-room. After following a hardcore health regime, no-one could begrudge visitors a hearty meal beneath the realistic looking indoor orange trees. Plus a well-kept secret here are the melt in the mouth, multi-colored macarons. 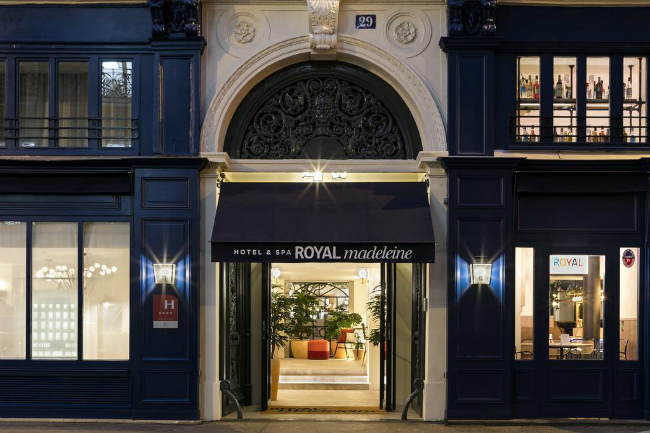 THE BEST OF THE REST

Slightly further away is the notable Chavanel hotel on rue Tronchet – a short sprint on the same street from an apartment favored by celebrities such as Prince, Leonardo DiCaprio and Madonna. In 2016, it received press for being the hideaway where Kim Kardashian and Kanye West were robbed, although insiders in the hotel industry insist that an episode like this would “never have happened in a hotel”. Enter Chavanel, a venue where the night staff offer a reassuringly security-conscious presence. Interesting design aspects include a bird-cage seat in the lobby, plus small touches of delicacy and elegance such as French lace curtains in the bedrooms. 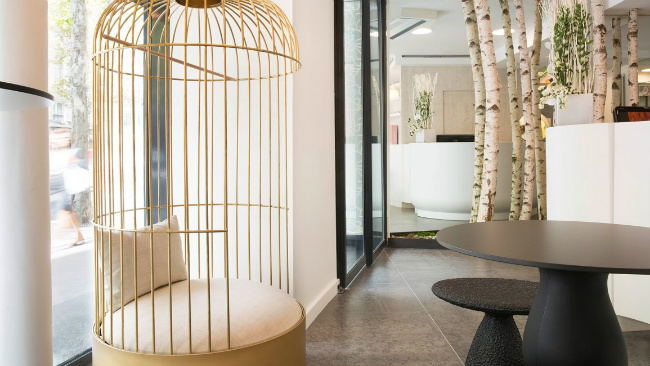 Finally, the Hotel des Grands Boulevards remains within walking distance of the opera house but is also handy for those intending to visit Musée Grévin or the lively Rex club, with its excellent DJ sets. Quirky features include the dog statues outside the front doors, while the criminally under-rated rooftop bar here, known as the Shed, quenches visitors’ thirsts.

All of the above are contenders for the perfect place to rest your head after a night at the opera – or simply to drop in for a drink or bite to eat before celebrating the 350th anniversary of the Paris Opera. Enjoy! 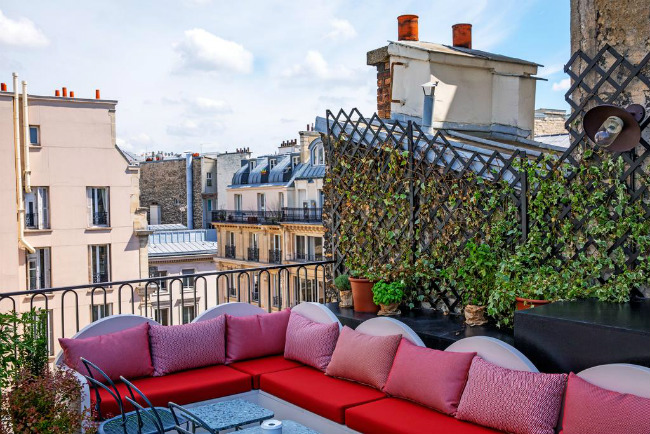 View over the rooftops from Hotel des Grands Boulevards