Sauce Bolo’ from Rue de Lappe: How to Use Up Summer’s Last Tomatoes 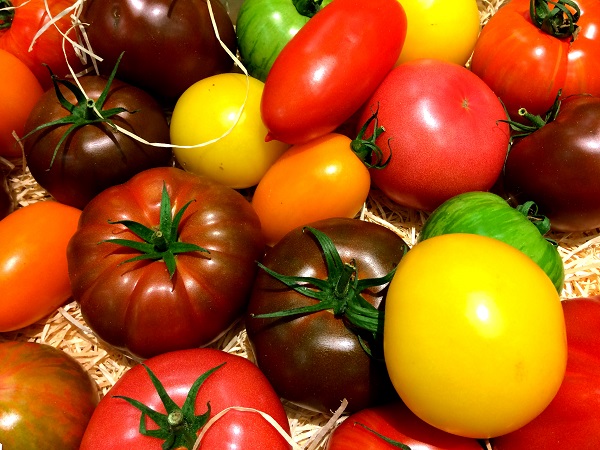 What do a market gardener, an accordion player, a grumpy concierge, and a leather-clad hairdresser have in common? They all, at some point, have shared in the legendary history of the rue de Lappe in Paris’ 11th district.

In the late eighties, this street was known as a cut-throat alley, but today, despite the flux of party tourists and a regular rotation of residents, what remains constant in the rue de Lappe is the spirit of the bar-owners and the one remaining Auvergnat who calls this street home.

If you’ve ever been to the rue de Lappe, you might have noticed the unmistakably Parisian incongruities there: water-worn paving stones wobble under Vespas as they buzz down the mostly pedestrian street, former scrap-metal workshop windows now display contemporary art, and the low thud of dance music emanates from the numerous bars and dance halls. 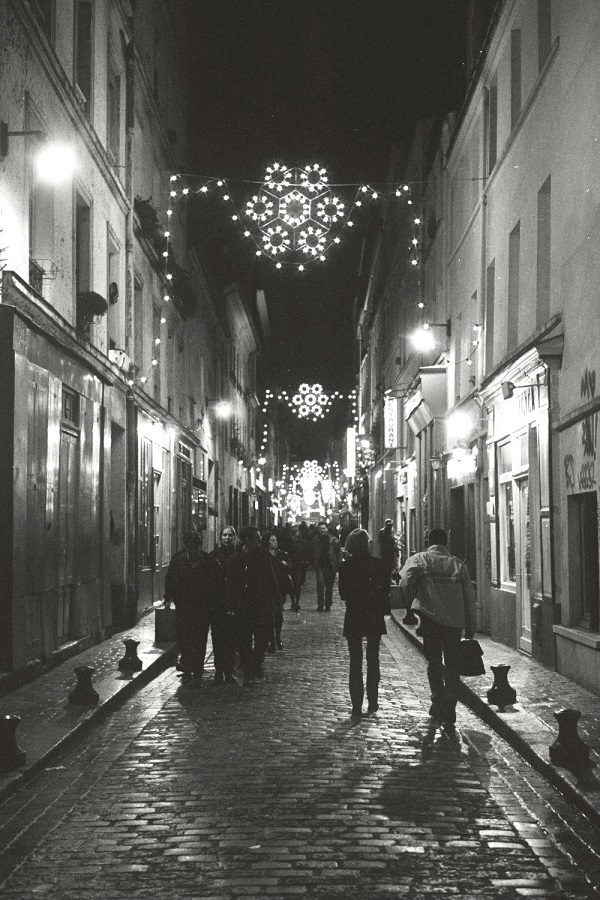 Located just behind the Bastille, the rue de Lappe was named for Gérard de Lappe, a maraîcher, or market gardener, who cultivated his gardens here in the 17th century. Long before the street became well-known as the party destination for le tout Paris, it housed workshops specializing in scrap metal, zinc for bistrot bars, and copper.

In the 1800s, migrants from the Auvergne region set up shop there, running cafés-charbon, places where they sold coffee, wine, and coal. (Not to be confused with the current Café Charbon in the rue Oberkampf, where hipsters crowd the bar.)

Those Auvergnats played the cabrette (a sort of bagpipe) alongside Italian immigrants who introduced the accordion, the “evil box” whose sound tended to drown out the cabrette, creating jealousy among the Auvergnats.

Together, though, these immigrants formed the first bals-musettes in Paris, informal dance halls where people danced a variety of steps like the bourrée (a traditional Auvergnat dance), the waltz, the java, and even the tango.

When I moved to the rue de Lappe in 1998, I admit I was impressed by the last remaining dance hall, Le Balajo. After a few weeks, I still hadn’t been there to dance, but I had started recognizing some of the street’s most charismatic figures: a tall wide-eyed guy with the stand-up shock of gray Don King hair, who gave a wordless salut to one of his comrades simply by lifting one huge palm high into the air above him, or the little moustached rose vendor who would sit on his cement cylinder in front of Le Balajo hawking “Dix francs la rose!” with such precise cadence. 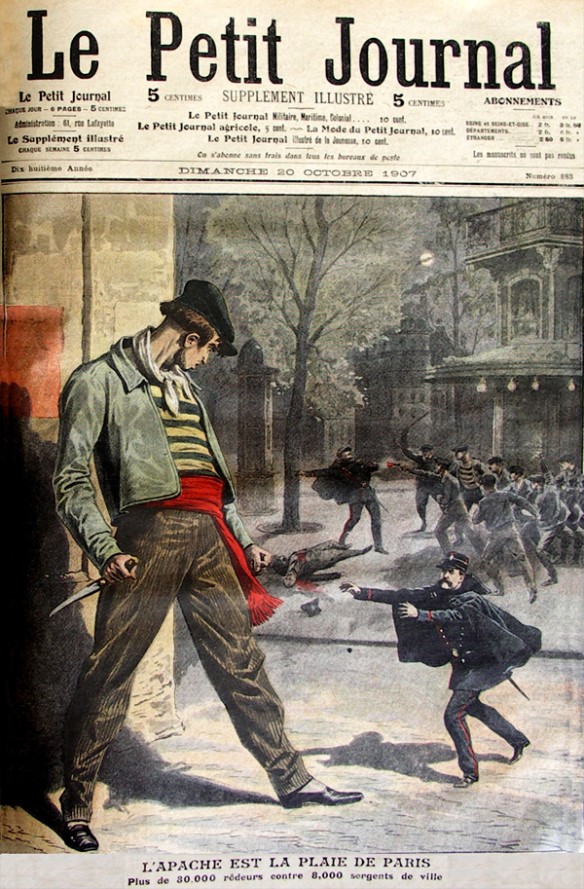 “The Apache is the plague of Paris.”

Like those charismatic figures, Le Balajo was the life of the street party back in the 1930s, when the rue de Lappe counted no fewer than 17 bal-musettes. The area also heated up thanks to prowling bands of Apaches, the local thugs. These malfrats, or small-time gangsters, roamed the streets around the Bastille dressed in their particular gang’s get-up: they sometimes wore a special brightly-colored scarf, and the one thing these Apaches really obsessed about were their shoes. I think I might have made fast friends with these guys if they’d lived in the rue de Lappe in 1998.

The Apaches weren’t interested in dancing at Le Balajo, unlike the major personalities of the time who frequented the place: people like Rita Hayworth, Maurice Chevalier and Edith Piaf. They all came to see Jo Privat, the accordion-playing soul of Le Balajo. Confusingly, Le Balajo was not named after the famous accordionist Jo Privat, but for the owner of the club, Jo France: Le Bal à Jo, or Jo’s Ball. The Balajo is still a fixture in the rue de Lappe, even though modern music halls like the Mécanique ondulatoire in the neighboring passage Thiéré have taken precedence in popularity.

For the first few months I lived in the rue de Lappe, I was dying to meet (and try flirting with) Pierrick, the soft-curled, sad-eyed hairdresser who wore a wrinkled leather biker’s jacket. But the only person I knew in the rue de Lappe was Ginette (not her real name), the stooped and sour little concierge who swept our building’s narrow staircase. She warned me away from the street’s shop-owners, but there was no need: they were as aloof as the partying bar patrons were lively.

I did manage to chat up the owner of the last remaining Auvergnat shop (Aux Produits d’Auvergne, 6 rue de Lappe), while she gave me samples of her delicious cheeses: a cube of soft, ripe Saint Nectaire, or hazelnutty cantal, or a bit of that a superlative Gaperon that held my mouth hostage with garlic-fire for hours afterward.

I would have even settled for light conversation with the paunchy tapas-bar owner who leaned seductively out the door until business picked up around eleven. I’d walk past and take in the tempting warm odor of everything fried wafting out the door, but I couldn’t seem to manage the kind of bonsoir that led to a casual chat.

When guys in the street would yell out Salut, ma belle! it wasn’t exactly the sincere invitation of friendship I was looking for, rather more like running a cobblestoned gauntlet of seedy pick-up lines. My upstairs neighbor had introduced me to the building by telling me to watch out for the rapist who was working the area. (Thanks for the warm welcome!) With all these warnings, how in the world was I going to infiltrate the rue de Lappe’s secret society of locals? 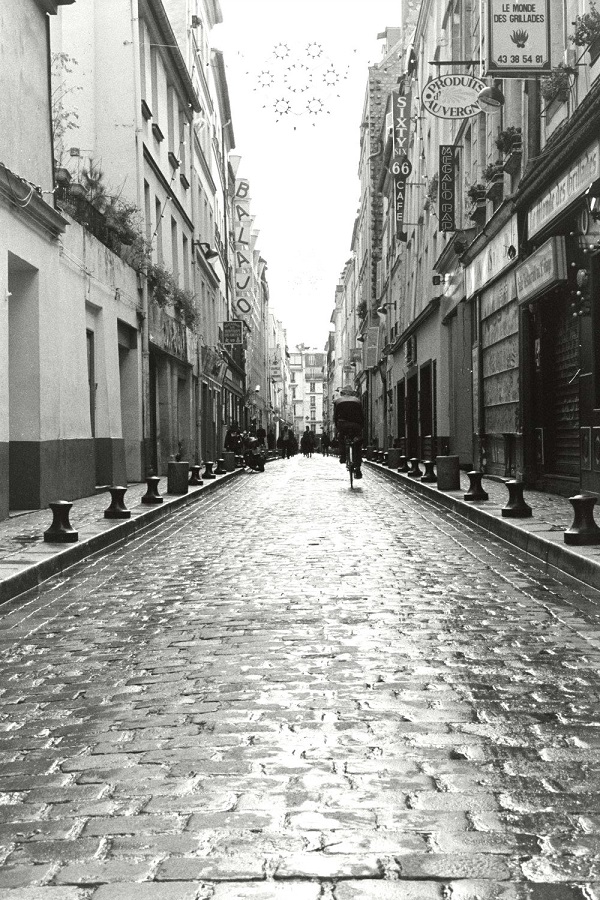 One night, returning home late with a friend, a frizzy-haired café-owner I’d seen a couple of times stopped me and asked for a cigarette. Back then I was a smoker; I immediately handed one over, a few offhand remarks were exchanged, and in the subsequent days, I noticed a nearly-imperceptible shift in attitude among the immediately surrounding rue de Lappe elite. Where once I had received languid or distant nods from those few nearby bouncers and barmaids, I was now greeted with a proper bonsoir.

Ginette began giving me more unsolicited warnings about who to avoid in our street, proclaiming these characters infecte! (revolting) in her shrill voice, raising one gnarled finger into the air above her broomstick. I was hardly looking for validation from the shrivelled concierge, but her warnings were a kind of proof that I had set foot into the first of an endless number of the rue de Lappe’s concentric social circles.

I did end up spending some time with hairdresser Pierrick, at least long enough to find out what he eats. You’ll find his recipe for Bolognaise Sauce – or Sauce Bolo’ for short – below. Among his other tricks, Pierrick uses carrots in his sauce, to add just the right amount of sweetness that cuts the tomatoes’ acidity. (I’ve seen many a Parisian add a couple of white sugar cubes to their sauce!)

There’s a saying in French about carrots making a person aimable, or friendly. I might just return to the rue de Lappe one of these days and give some carrots to that sourpuss concierge Ginette. Or, I’ll just let those all characters from the rue de Lappe reside as a kind of “sauce” in my memory: according to toothy-grinned Fernandel’s character Mario in the film Coiffeur pour Dames, “A hairdresser is one part confidant, one part concierge, and one part confessor.”

Although Pierrick loves to cook on weekends, he doesn’t have time to stand over his stove stirring an elaborate sauce for hours. But being enamored of the well-developed flavor of those long-cooking sauces means finding an easy way to cheat.

So Pierrick’s secret to a good sauce is to let it mature, which is a fancy way of saying that you let it sit in the fridge for a day or two before partaking. Pierrick said he lets his sauce confire, or preserve in its own juices for at least two nights – we all know that a “saucy” dish tastes better the next day anyway, right?

Also, when he gave me this recipe, I remember thinking how fussy it was to have to buy three kinds of meat from the butcher’s. But it’s precisely the different flavors and textures that give this sauce its depth. Right now, fresh tomatoes are delicious, but you can definitely use canned tomatoes if you’re making the Bolo’ in the depths of winter. But with all these late-summer tomatoes, why not make an extra couple of batches of the fresh tomato coulis and freeze them? 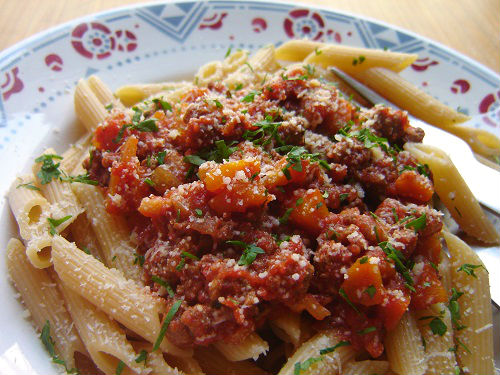 note: To make a quick tomato coulis, first remove the stem end and then make a small incision in the shape of an “x” on the bottom of the tomato. Drop the tomatoes into simmering water for about 15-30 seconds. Remove them with a slotted spoon, and drop them into cold water for just a few seconds. Now peeling the skin off the tomato is easy! After peeling, cut the tomatoes into several large pieces, and process them in a blender, food processor, or with a wand mixer until smooth. Voilà!