Valentine’s Day in Paris: 5 of the Most Romantic Hotels 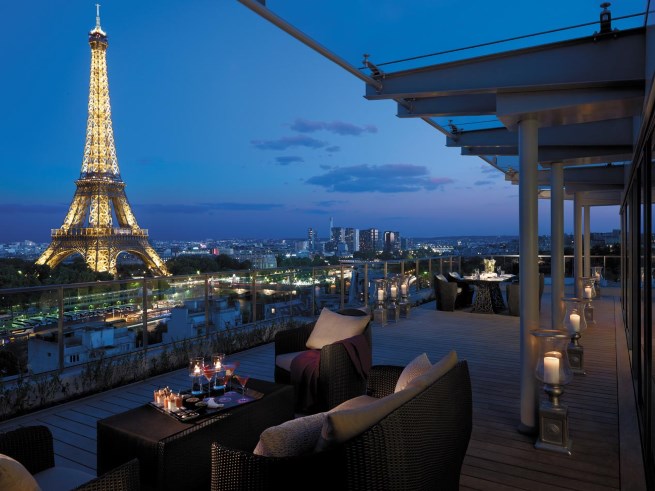 Spend Valentine’s Day in absolute luxury at one of the most elegant hotels in the world, Le Meurice, situated in the heart of the City of Love. This historic palace hotel has been frequented by the higher echelons of society for 200 years and was a regular haunt for Salvador Dali, after whom the second Alain Ducasse-run restaurant on the premises is named. 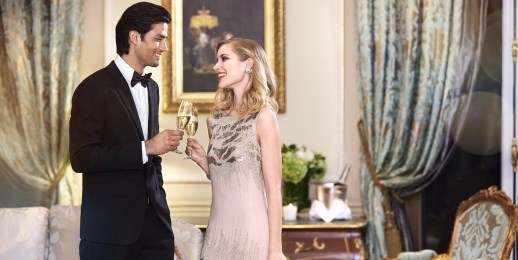 On arrival, lovers will be treated with champagne and chocolates made by the 18 Michelin starred Alain Ducasse himself, brought directly to their room– though presumably not by Alain. (Read more about Ducasse’s Manufacture de Chocolat here.) Le Meurice is also allowing couples a late check out at 4pm the next day, so there is plenty of time for a morning…lie-in. 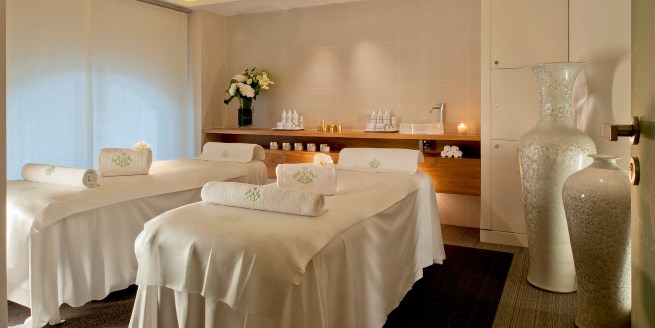 A romantic, rose-themed Valentine’s menu will be served at Le Dali and Salon Pompadour with a selection of Laurent-Perrier Champagne paired to each of six courses and a special dessert offering, “The Rose,” fashioned by acclaimed pastry chef Cédric Grolet (€250 per person, beverages included, available February 14). There are also indulgent couples massages available at the in-house Spa Valmont. Rooms start at €830. 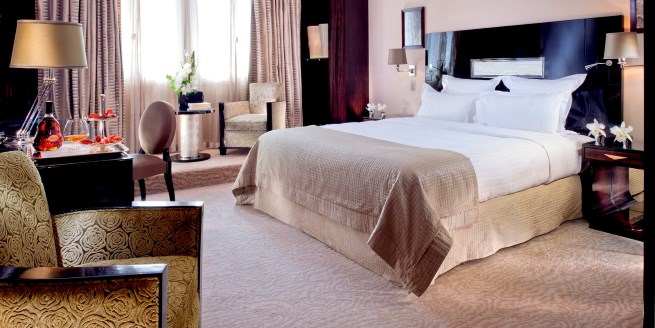 Just a Cupid’s arrow from the Champs-Élysées, the Hôtel Plaza Athénée is quite possibly the most stylish place to spend your Valentine’s Day in Paris. A bottle of Moet et Chandon Rosé champagne will be brought to your room for a romantic glass-clink out on the balcony, over looking the Eiffel Tower. Later on, dine on an elegant five-course gourmet dinner at Le Relais Plaza (€220 for two, available February 14).

If you and your other half are looking for something a little more personal and hidden away, the Pavillion de La Reine is a fantastic choice. Just off the Place des Vosges, often considered the most beautiful square in the world, this four star hotel has all the charm of a smaller, privately owned establishment. 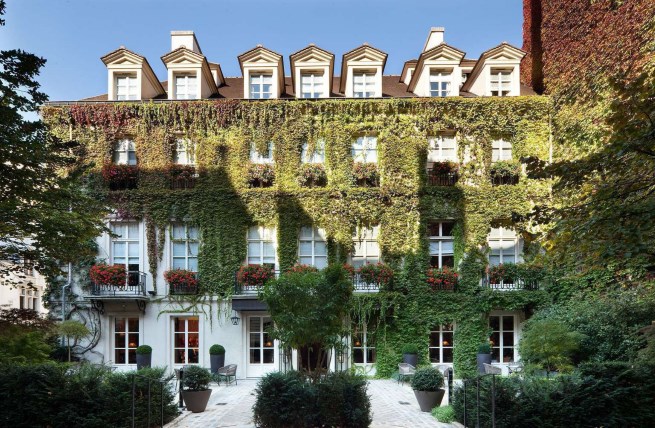 For Valentine’s Day, the special offer features a 2 night stay, with complimentary macarons and champagne, as well as free access to the sauna, hammam and fitness center. Breakfast is also included in the €1070 price-tag. Feel like Kings and Queens this Valentine’s Day in the aristocratic Marais district.

Set within the 16th arrondissement, in Napoleon Bonaparte’s family digs, the Shangri-La hotel is another luxurious option for a Valentine’s Day break. Their offer includes a complimentary bottle of champagne (a running theme), chocolates, fresh flowers and even a valet service.

Rooftop terrace at the Shangri-La

Above all else is the palace hotel’s view of the Eiffel Tower, probably the best in Paris. With just the Seine between you and this landmark you have a full HD view, making the Shangri-La terrace the most romantic place on earth for a Valentine’s day kiss. PS. Don’t miss the hotel’s nature-inspired Bar Botaniste, where you can sip cocktails crafted from rare botanical spirits .

Valentine’s Day at the Shangri-La.

Le Bristol on Rue du Faubourg Saint-Honoré is a palace hotel boasting 4 Michelin stars, with its two restaurants considered some of the finest in Paris. This Valentine’s Day the hotel has an inclusive package loaded with gifts and delights. They begin with “a Baccarat gift, a bottle of Champagne and a chocolate piece from Laurent Jeannin to be placed in room upon arrival”, followed by cocktails for two down in Le Bar du Bristol.

Guests will also be entered into a number of lucky dips with extravagant prizes including handmade jewelry items from Baccarat and Spa retreats.