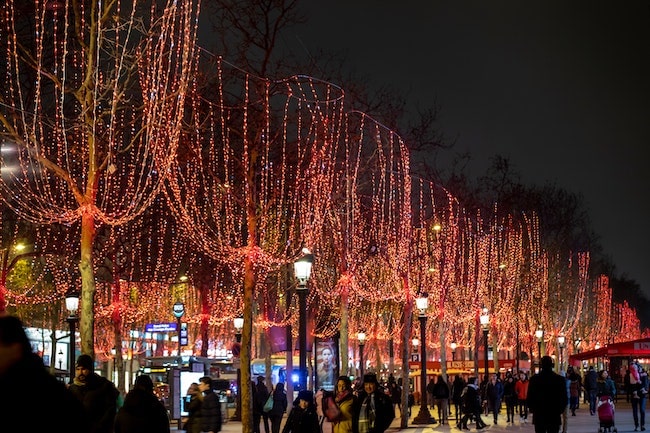 The famous holiday illuminations are now glittering on the Champs-Élysées! The inauguration ceremony took place on Sunday with singer Clara Luciani and the avenue was closed to traffic for the occasion. The avenue will be illuminated every day from 5 pm until 2 am (and all night long on Christmas and New Year’s Eve) until January 9th.

To the delight of the millions of fans of the hit Netflix series, Part 3 of “Lupin” is currently shooting in Paris. Star Omar Sy has returned to his role as Assane Diop—  “a character inspired by the world famous gentleman thief and master of disguise, Arsène Lupin,” to quote Variety. Apparently the show is Netflix’s second biggest international success after “Squid Game.” Netflix has said that Part 1 was watched by more than 70 million households within its first 28 days on the platform.

And Emily is back to her old tricks in Paris. Whether you love it or hate it, “Emily in Paris” sure gets the hype. Check out the trailer below for the second season of Darren Star’s comedy series starting Lily Collins.

It was a historic win. On Saturday, the French national rugby team beat the New Zealand All Blacks for the first time in 12 years. And for the first time in Paris since 1973. The score was 40-25, a decisive victory to end a 14-match losing streak against the All Blacks. Check out the match highlights in the YouTube video below:

Also on Saturday, demonstrations took place in Paris and other French cities to demand more government action to prevent violence against women. Tens of thousands of protesters took to the streets to make their voices heard. To quote Al Jazeera: “Groups fighting violence against women said at least 101 women have been killed by their partners or former partners in France this year – about one woman every three days. More than 220,000 women are suffering physical or sexual abuse by their partners each year, according to a 2017 nationwide study. Activists are urging President Emmanuel Macron’s government to dedicate 1 billion euros ($1.1bn) annually to fight violence against women, instead of 360 million euros ($406m) spent now, in part to create more shelters.”

A new wave of the Covid-19 pandemic is washing over Europe— in France case levels have surpassed 20,000 a day— and France is taking steps to slow the spread of the virus. Booster shots are now available for those over 50 years old (and mandatory for the continuation of the health pass), and the French health authority recommends that the booster vaccines also soon be made available to over 40s. The increased Covid spread is thought to be linked to the arrival of colder weather, more time spent indoors, fatigue and complacency, and eroding vaccinate protection, especially in the face of the Delta variant which is now dominant across Europe. Want to stay up to date with all the pandemic news? We highly recommend following veteran journalist John Lichfield on Twitter, where he posts weekly threads breaking down the pandemic data and health stats.

This Glass Pyramid May Change the Paris Skyline Forever – slated for completion by 2026: https://t.co/ncIaViYo8r pic.twitter.com/Y9LYTTGlkE

Will a giant glass pyramid designed by Herzog & de Meuron be erected in the 15th arrondissement? Surface magazine says the project’s “sparking a firestorm of architectural debate in Paris.” With 42 storeys, the “garish triangular tower” will be highly visible, transforming the very skyline. To quote the article: “The tower is already drawing unfavorable comparisons to the neighboring Tour Montparnasse, a ‘70s-era skyscraper not quite in tune with the Parisian vernacular that remains a the subject of widespread derision to this day.” Read the full article here.

Last but not least: French authorities say 12 people will stand trial in Paris over a $10 million jewelry heist targeting reality star Kim Kardashian West in 2016. (She was tied up at gunpoint and locked in a bathroom while the robbers cleaned out the luxury apartment rental.) The “alleged mastermind” has already written Kardashian West an apology letter from his prison cell. To quote the Associated Press: “After five years of investigation, investigating judges have ordered the case sent to trial, a judicial official said Friday. The 12 suspects face a range of charges related to the theft. No trial date has been set, and the official would not provide further details.”

Previous Article Designer Marin Montagut Celebrates the Authentic and Timeless in Paris
Next Article A Shocking Good Time: An Ode to Elsa Schiaparelli