The Hit TV Series Lupin: Arsène Lupin Then and Now 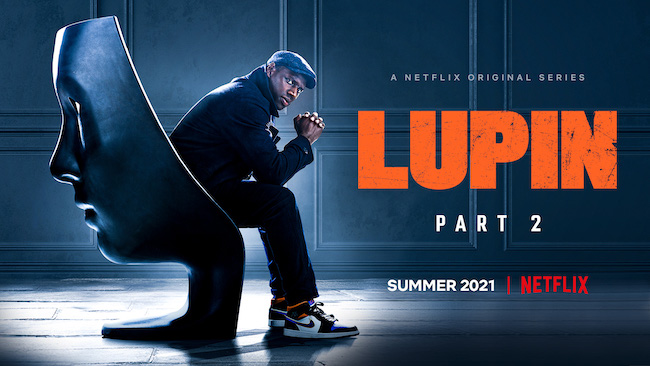 Since travel is constricted during the pandemic, virtual views of France—Paris in particular—have taken international TV by storm. Emily in Paris, Dix Per Cent (Call My Agent), and perhaps the best and most interesting, Lupin. It’s impressive that the series about a thief named Arsène Lupin has become extraordinarily popular, even though it’s in French, and has not been remade or otherwise adapted to the global audience.

Who is Arsène Lupin? He’s one of the oldest iconic figures in French popular literature (as well other art forms: cinema, the stage, television, even a video game). He was first featured in a series of adventure novellas written in the early 1900s by Maurice Leblanc. He was (as the show also mentions) a “gentleman thief.” He’s in the Robin Hood tradition of the man on the wrong side of the law who’s actually the good guy. There are French equivalents in 19th century literature, like The Count of Monte Cristo and Les Miserables. A more apt equivalent lies in the lighter caper films of Hollywood, like Jules Dassin’s Topkapi and To Catch a Thief, starring Cary Grant. (Robert Wagner starred in a TV takeoff, It Takes A Thief in the 1960s). The thief uses street smarts and charm to access the Establishment’s booty, and just as much to ruffle its feathers. In other words, the “gentleman thief” is a modern twist on the mythical Trickster.

The particularity of the latest iteration of Lupin is that he’s black, played by the Senegalese-Frenchman Omar Sy. To the French public, Sy is a mostly comic superstar (he began as part of a stand-up comedy team, Omar and Fred, and has starred in some of France’s top-grossing films), so taking on the role of Arsène Lupin (his real name in the series is Assane Diop) was as natural as Eddy Murphy doing a star turn in an American equivalent. Still, a black Lupin gives us the enjoyable frisson of watching the underdog turn conventional society upside down—the worm turning. In the first episode he steals a necklace once owned by Marie Antoinette, set to be auctioned off by a corrupt upper-class family that acquired it illicitly. We can’t help but react with Yesssssss!

Technically, the series is a marvel. Unlike Emily in Paris, with its cheesy sitcom aesthetic, Lupin seems like it was made for the big screen (remember those?). The directors (Louis Leterrier and Marcela Said) seem to have modeled their style and technique on the heist movies of Steven Soderbergh. The shots of Paris are impressive rather than merely picture-postcardy, and the overall style has genuine flair. Not only Omar Sy, but the supporting cast is always believable, whether amusing or moving. Ludovine Sagnier as Assane’s ex-wife is especially affecting, as is Mamadou Haidara as Assane as a young boy.

The makers of Lupin also try to give it some social heft. For it wasn’t just that the necklace was illicitly obtained by the nefarious aristocratic family. Assane/Lupin’s kindly Senegalese father worked as a chauffeur for said family, and was treated rather off-handedly. For some reason the patriarch wanted to fake a theft of the jewels (perhaps to keep them in limbo until a statute of limitations ran out, when they could suddenly turn up again). Who was the patsy? This is so predictable that no spoiler is necessary. Just like the fact that he goes to prison and then commits suicide.

This egregious original sin, as in Dumas and Hugo, reverberates from past to present. The son of the wrongfully accused driver becomes maladjusted, always broke, separates from his French wife, and has difficult relations with his son. Certain high-minded types have appreciated the social dimension, but it feels both terribly edifying and if not utterly fake, then to use the expression of Budd Schulberg in his Hollywood novel What Makes Sammy Run?, “hoked up”.

When the focus moves to the issue of identity the series gets even more dodgy. Much is made of Assane/Lupin’s father’s love of books, including the real Arsène Lupin stories. And of course, his son soaks up the books, takes the name, and fulfils the desire to be a real “gentleman.” It’s an ode to the mission civilisatrice, the idea that inside every colonized person is a little Frenchman waiting to be hatched. Making Lupin Senegalese is key to the idea. Senegal is considered the “good pupil” of the ex-colonized, with its intellectual poet-leader Léopold Senghor who was not only a deputy in the French National Assembly but also a member of the Académie Française. (It’s also the African country where upper-class French people go on holiday at Club Med.) It wouldn’t be the same vibe for a character who was, say, Malian. At the end of the episode, Lupin gives his precious book of Arsène Lupin adventures to his own son, saying that it represents their heritage. What would Frantz Fanon say?

While the show stumbles with the social stuff, it’s basically back-story and background. The front-and-center story is the heist of those jewels from the teeth of the snooty auction that takes place right in the maw of the Louvre. And here plot, action, character relations, and film technique all mesh wonderfully. The heist genre is essentially a how-done-it, an intellectual puzzle that reverses the Sherlock Holmes/Agatha Christie crime detection formula. On that level Lupin is not just eye-candy but brain-candy. Bonne degustation!

Lead photo credit : The series, a worldwide phenomenon, led by Omar Sy, which has been Number 1 in Netflix’s Top 10 across more than ten countries, will return in Summer 2021. The 5 new episodes are directed by Ludovic Bernard (The Climb) and Hugo Gélin (Love at second sight). Lupin, Netflix. Photo credit © Netflix, press release.