Emily in Paris: 8 Filming Locations You Can Explore in Real Life 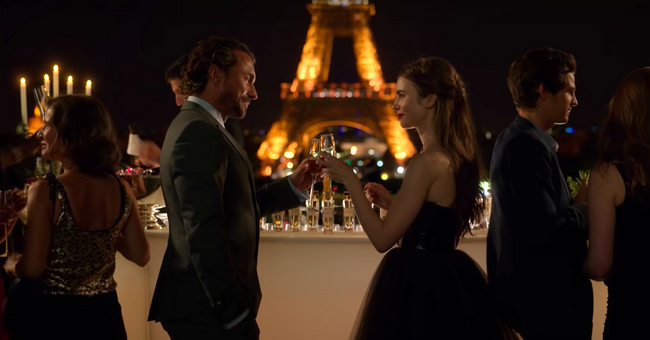 Ever since the Netflix television show Emily in Paris was released in early October, it’s been a global smash hit and the No. 1 show in almost every country the platform serves.

Maybe it’s timing, since so many people around the world are plagued with hopeless political situations and COVID-19 and want an escape or something fun to watch or perhaps it’s the very notion of an American show taking place in Paris that drives people to watch it. Whatever it’s been, the most interesting takeaway is how much press, good and bad, Emily in Paris has received.

Although the beautiful and talented star of Emily in Paris is Lily Collins, there’s no denying that she is upstaged by an equally beautiful star, the city of Paris. The series was entirely filmed in Paris with a French crew, so there are no fake backgrounds or cheesy imitation sets shot on a soundstage.

I’ve been a tour guide in Paris since 2007 and I easily identified just about every location in the show, as they are on my tour itineraries. Since I haven’t been able to give my tours this year to American travelers because of the restrictions, I was inspired to make a video based on the locations in Emily in Paris, where I tell the history and facts about them, plus share insider tips.

In case you haven’t heard or watched the show yet, here’s a short synopsis without giving too much away. Emily Cooper (played by Lily Collins) is a young, junior marketing executive working in Chicago, who is transferred to a new job in Paris, at a new French affiliate of her company, at a moment’s notice. Voila, she lands in Paris for the first time without knowing a speck of French or another human being. In the next nine episodes, we amusingly watch Emily maneuver the city and its customs and codes, her new boss, the ins and outs of dating French men, how differently the French behave at the office than back home in the U.S., and the complex culture of the French.

Here’s a list of some of the locations in the show with fun and interesting facts.

In the first scene when Emily arrives in Paris, a handsome concierge escorts her to her sixth story apartment with no elevator and they stealthily climb up the stairs with her suitcases. The apartment on the top floor, turns out to be a chambre de bonne (maid’s room). The show used a little artistic license and gave Emily a full kitchen instead of a hot plate and mini-refrigerator, a lot more room than an authentic chambre de bonne, which usually measures about 150 square feet, and a full bathroom in the apartment.

The apartment is located on Place de l’Estrapade, a quaint square with a fountain near the Panthéon on the Rive Gauche (Left Bank).

Emily immediately goes to La Boulangerie Moderne, which is a real-life bakery just a few doors away from her apartment. I personally tasted the pain au chocolat Emily tries, and I had the same exact expression on my face after experiencing it. In 2019, La Boulangerie Moderne won the award for one of the top 20 galette des rois in Paris, and owner and baker Thierry Rabineau proudly displays the sign for it in his window.

Emily’s office is located in the first arrondissement close to the Louvre, on Place de Valois, which is an almost hidden square lined with 18th-century limestone buildings. The location rings authentic as there’s a big concentration in the area of offices for major fashion brands as well as fashion PR companies and events for Fashion Week.

Place de Valois is just next to the Palais Royal and many key scenes in Emily in Paris are shot there.

It was originally built between 1633 and 1639 as the Palais de Cardinal, the private palace for Cardinal Richelieu, but he only lived there for three years before he died in 1642. The palace was inherited by the next generations of French royalty including King Louis XV, Queen Anne of Austria, and Philippe d’Orléans.

The Palais Royal became the first shopping arcade and entertainment complex in Paris in 1784 with clothing and design boutiques, galleries, shops, restaurants, and cafes, and theaters. Europeans and Parisians flooded the Palais Royal, which became a major tourist attraction and the place to be seen. The plan to execute the French Revolution was secretly launched at a café in the Palais Royal, and a few days later on July 14, 1789 the revolutionaries symbolically stormed the Bastille prison.

In a later episode, Emily is desperate to make a good impression on her boss and clients, and she thinks she pulled off the ultimate coup by snagging a reservation at Le Grand Véfour the same night. A few minutes later she is embarrassed to learn that she mistakenly switched the day with month and actually made the reservation for a few months later.

On the northern side of the Palais Royal, Le Grand Véfour is one of the oldest and prettiest restaurants in Paris with its neoclassical design elements. Originally named Café de Chartres when it opened in 1784, it was later owned by chef Jean Véfour and renamed Le Grand Véfour. The revered artist and poet Jean Cocteau designed the menus in 1948.  In 2011 the restaurant was bought by Chef Guy Martin and it has received two Michelin stars.

A commercial shooting for a new perfume brings Emily to the Pont Alexandre III  when she uncomfortably encounters a model strolling across the bridge, wearing only a pair of high heels.

The Pont Alexandre III is the most opulent of 37 bridges crossing the Seine River dividing Paris into the Rive Droite (Right Bank) and Rive Gauche (Left Bank). Named after Tsar Alexandre III from Russia, who helped forge the Franco Russian Alliance in 1892, the Pont Alexandre III was constructed between 1896 and 1900. Designed in the Beaux Arts style with crystal lamps, cherubs and gold nymphs, the focal point of the bridge is the four, 56-foot columns with gilt bronze sculptures on top. The sculptures reference the arts, the sciences, commerce, and industry.

Scenes from the James Bond film, A View to a Kill; an Adele video; the 1998 movie Ronin; the Woody Allen film, Midnight in Paris; and the television series The Sopranos used the Pont Alexandre III as a backdrop.

The iconic La Maison Rose, the pinnacle of charm in Montmartre, is the setting for a dinner Emily has with her friend Mindy before they party the night away. La Maison Rose, meaning the pink house, has been a fixture in Montmartre since 1909, and today is still a thriving café serving local, fresh and seasonal food. Local painter Maurice Utrillo captured La Maison Rose in a 1916 painting.

A scene where Emily pulls a social media stunt by lounging in a bed outdoors was filmed a little further down on the same street as La Maison Rose. Rue de l’Abreuvoir is frequently voted the most beautiful street in Paris.

When Emily appears in a sexy black strapless dress peering at the Eiffel Tower when it sparkles, it’s at the Café de l’Homme, inside the Musée de l’Homme, the museum about the evolution of mankind.

The museum is located in the arts complex, Palais de Chaillot, which was built in 1937 and has one of the best views of the Eiffel Tower.

Watch the Trailer for Emily in Paris on YouTube here.