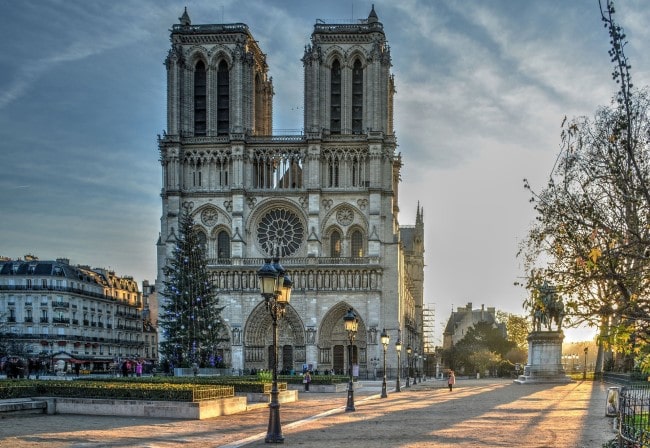 Notre-Dame cathedral is still scheduled to reopen in 2024, after the devastating 2019 fire that destroyed the roof. On a recent visit to the restoration site, Culture Minister Rima Abdul Malak said that rebuilding work would commence at the end of the summer, now that the clean-up has finished. The idea is to reopen to the public just in time for the Summer Olympic Games held in Paris. The world-famous cathedral will be rebuilt to its original design, including the spire added by architect Eugene Viollet-le-Duc in the 19th century.

Have you noticed all the new-look sidewalk cafés in Paris? Some landscaped with potted plants and greenery, others spilling into parking spaces with high-quality tables and decor? Needless to say, Paris is launching a competition to award the prettiest restaurant terrace. The first-ever “concours de la plus belle terrasse” is now open to all merchants with authorization to expand their seating into the streets (this was first enacted during the height of the pandemic). The idea for the competition was proposed by shopkeepers, local residents, and politicians to recognize restaurants doing their part to beautify, enliven, and enhance their districts. To be awarded at the end of September, the award will take into account aesthetics, urban integration, green and environmental focus, and respect for the surrounding neighborhood.

Speaking of Paris shops and commerce: Anne Hidalgo issued a municipal decree requiring air-conditioned businesses to keep their doors closed (some boutiques had left them open in order to entice passers-by inside), to save energy during the current climate and energy crisis. The law went into effect on July 25 and businesses will be fined if found to violate it.

In excellent economic news, France has avoided recession with 0.5% growth in this quarter. In assessing the eurozone economy since the war in Ukraine has spiked energy prices and disrupted supply chains, The Guardian notes that France has avoided recession “by returning to growth in April-June as stronger exports helped offset weak domestic demand.” (The French GDP shrunk by 0.2% in January-March because of rising inflation).

And a strong dollar means that Americans are house hunting in France in a major way. Bloomberg reports that searches for French properties by U.S. jumped 37% in the first five months of the year, compared to the same period last year. To quote: “Contributing factors to Americans’ growing interest are the favorable dollar-to-euro exchange rate, the build-up of pandemic-related savings and the return of travel after two years of closed borders, Knight Frank said in its latest Prime France Report. The weaker euro alone means it’s 16% cheaper for Americans to buy property in Europe compared to a year ago.”

Have you heard of the Chateau Louis XIV? Billed as “the world’s most expensive home,” this lavish property in Louveciennes outside Paris is where Saudi Arabia’s Crown Prince Mohammed bin Salman stayed on his recent trip to France to meet President Emmanuel Macron. As reported by Agence France-Presse, the new-build mansion, purchased in 2015 for 275 million euros ($300 million at the time), was “intended to mimic the extravagant luxury of the nearby Versailles Palace.” The buyer was anonymous, though it was later reported by The New York Times to be Bin Salman, via a series of shell companies.

And in interesting art news…. Back in June, a casting of “The Thinker,” the iconic sculpture by Auguste Rodin, sold for 10.7 million euros ($11.14 million) at a Paris auction. As reported by CNN, “the auction house, Christie’s, had estimated the casting, one of roughly 40 authentic outstanding ones, would fetch between 9 and 14 million euros. The record for a Rodin “Thinker” was set at a Sotheby’s auction in New York in 2013, when one sold for $15.3 million.” The sculpture was originally conceived by Rodin in 1880 as part of “The Gates of Hell” and it was only 70 centimeters (28 inches). To quote CNN: “The sculpture initially represented Dante, the medieval Italian poet and author of the “Divine Comedy”, leaning forward to observe the circles of Hell, while meditating on his work. While remaining in place on the monumental “Gates of Hell”, “The Thinker” was exhibited individually in 1888 and thus became an independent work.”