Towering Above it All: The Eiffel Tower 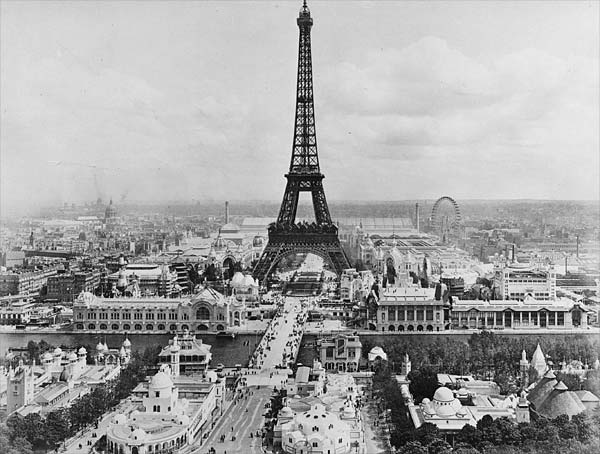 “Of all the things Paris has made, it alone has neither wit nor soul,” Hilaire Belloc, French historian and writer, said of the Eiffel Tower in 1900. He wasn’t the only disenchanted critic of the structure that has dominated the Paris skyline since Gustave Eiffel designed it for the 1889 World Exhibition. British textile designer William Morris, found sitting on the top tier of the Tower one day, explained, “It’s the only place from which I can’t see the damned thing.”

My husband and I, on the other hand, don’t feel we’re in Paris until we see the damned thing. In fact, on one trip, we devoted a day to a walk with the Tower as our destination, choosing a route that we knew would afford stunning views of Gustave Eiffel’s witless, soulless folly along the way.

The Tower even influenced our choice of hotel room. When we arrived at our hotel, the bellhop led us to a room so small, I decided at once to ask for another. Then he opened the drapes and I glanced out the window. There, rising above my beloved Paris rooftops, was La Tour, its bronze façade gleaming in the morning sun. So what if there wasn’t enough space for my husband to do his morning stretches? Who cared if I would have to climb over the bed to get to the bathroom? We tipped the bellhop and settled in.

To get to the Tower, we chose rue Saint-Dominique, a lively commercial street that branches off Boulevard Saint-Germain in the 6th arrondissement and leads directly to the Tower at the far end of the 7th. We would have to traverse the entire length of the 7th to reach our destination, but there was much to enjoy along the way. 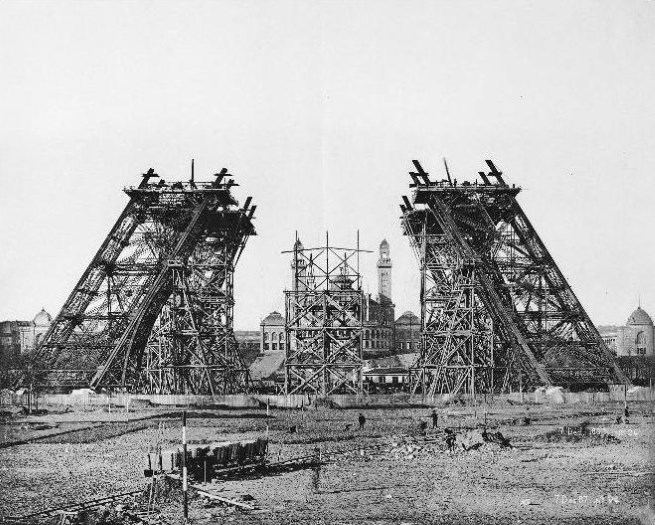 Just the tip of the Tower was visible in the distance as we started out. It looked very far off, but we were soon immersed in the pleasures of this gracious quarter. Thought of as “Seventh Heaven” by its devotees, it’s one of the most affluent residential areas in the city. The impeccable offerings of its fromageries, charcuteries, and patisseries reflect the demanding tastes of their upscale patrons.

I am addicted to the breads of Paris. Like a magnet, they keep pulling me back. A geometric arrangement of baguettes and sourdough boules, a nest of buttery croissants, swirls of raisin-studded glazed rolls—I find these harder to resist than the most lavish display of iced cakes and glazed tarts. The French have a saying, Long comme un jour sans pain – “As long as a day without bread” – that perfectly expresses my need, too, for a daily indulgence.

When we were not long into our walk, we came upon a boulangerie that stopped us in our tracks. We stood, mesmerized, at a window display of voluptuous loaves and rings, twisting and curving under their sculpted crusts. It was too soon after breakfast to consider going in, but the shop door was open, the aroma of fresh-baked bread drifted out, and we drifted in. Who among us can resist the temptation of dough rising in the oven?

Picking up our pace, we continued along rue Saint-Dominique, cutting through the Esplanade des Invalides, which houses Napoleon’s Tomb. We measured our progress by the size of the Tower, the larger it loomed above us, the closer we were to reaching it. And the closer we got, the more dramatically it was framed in foliage. 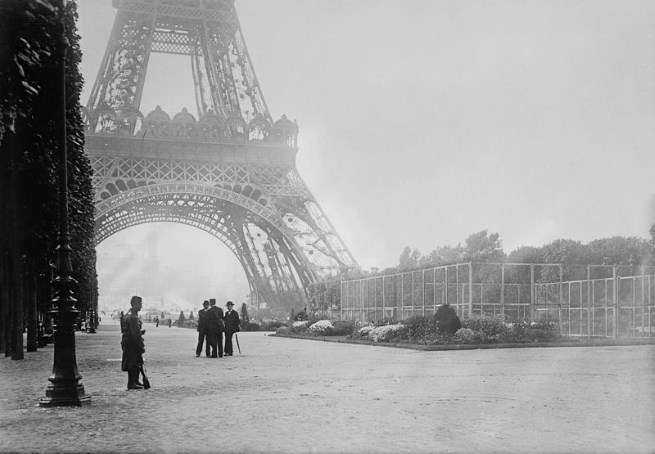 The Eiffel Tower, in Paris, France during World War I. photo: Wikimedia common

It’s hard to believe that today’s most famous Paris icon was actually on probation the first 20 years of its life, the term of exploitation granted its builders. Each time I see it, I am more grateful that instead of razing the Tower at the end of its lease as originally planned, Parisians had warmed to it, and now, more than 100 years later, accept it as the definitive symbol of their city.

As we walked, I found myself captivated with this district of pristine parks and elegant facades—its boutiques, its bookstores, its bistros, as well as its bread. My husband had to remind me to “Look up!” at the evolving images of the Tower, each more breathtaking than the last.

At one point, we glanced to our left and, seeing a crowd, we decided to detour one block to rue de Grenelle and walked right into the rue Cler marketplace, heralded by Rick Steves as one of the best in the city. For once, our timing was right. The great frustration of being surrounded by the abundance of the Paris food scene is there’s no way one can sample all of its extraordinary offerings. This day, it was noon when we reached rue Cler. We were hungry, and we had this delicious bounty to choose from. This market is not as raucous as most, where vendors sing out the freshness of their fish and the sweetness of their berries, luring passersby with tastes of pâté and tapenade.  Rue Cler vendors have no need to hawk their wares. They offer the best to shoppers who know the best.

A sit-down lunch may be had at the renowned Café du Marché but my husband and I prefer to collect a ham-or-sausage-stuffed baguette at one stall, a beer at another, an almond croissant at a boulangerie, then find a bench in the sun and watch the French do what they do best. Keith Floyd, the late cookbook writer and television chef for the BBC, spent many years in France observing the food scene. He described it this way: “Watch a French housewife as she makes her way slowly along the loaded stalls, searching for the peak of ripeness and flavor. What you are seeing is a true artist at work, patiently assembling all the materials of her craft.” It’s a scene I never tire of. 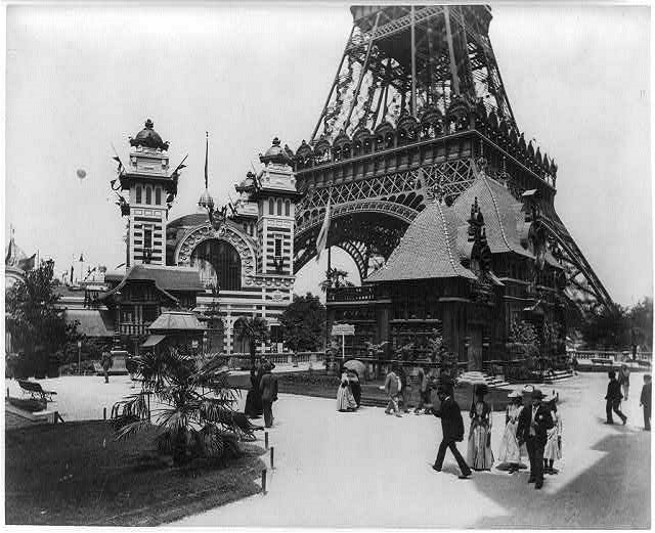 Grand opening of the Eiffel Tower in 1889, photo: Library of Congress

Leaving the market, we re-traced our steps to rue Saint-Dominique and followed it to its end at the Parc du Champ-de-Mars. Flanked by the École Militaire on one end and the Eiffel Tower on the other, the Champ-de-Mars was created as a parade-ground for the military school in the 18th century. Today, it’s a lush park for the area’s residents and a playground for their children.

As we entered the park, Eiffel’s mighty Tower stood before us, filling the landscape. We crossed avenue Gustave Eiffel into the only mob scene in the 7th – the plaza straddled by the Tower’s four immense legs. Day and night, it is jammed with tourists. We joined the crowd and lined up to ride one of the yellow elevators to the first level café where we stopped for a drink. From there, we boarded another elevator to the second level and slowly circled its platform, breathing in the panorama below—the excursion boats on the Seine and the fountains of the Trocadéro at our feet; the gilded dome of the Invalides, the Arc de Triomphe and the spires of Notre Dame Cathedral in the distance. William Morris was right. All of Paris was in our view – except the Tower we stood on.

Practical information: The Eiffel Tower is open every day, from 9 a.m. to midnight from mid-June to early September, and from 9:30 a.m. to 11 p.m. during the rest of the year. On the first floor, you’ll find a new transparent floor framing cool views below your feet– not for the feint of heart! The ticket to the top, via the elevator, costs €17,00 for adults. The ticket to the second floor, via the elevator, costs €12,00, or walk up– the adult ticket to walk to the 2nd floor is €7,00. Save time by ordering tickets online via the the official website: www.toureiffel.paris/en