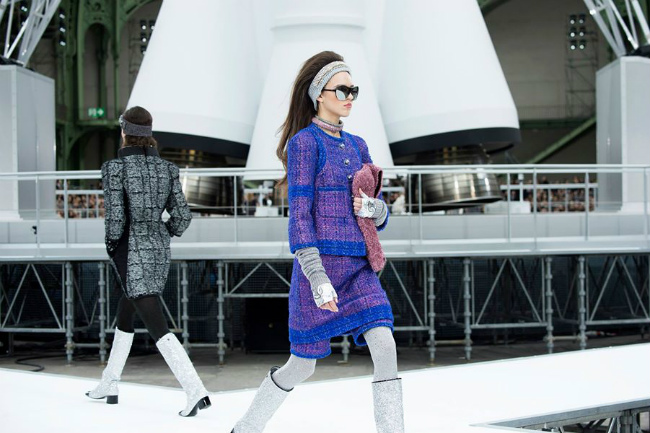 There’s a reason the September issue is Vogue’s largest.

Fall is an important fashion season, signaling a changeover from the breezy months of spring and balmy months of summer, to the cavalcade of bolder, thicker, more ambitious autumn and winter wear. If spring and summer are times of new beginnings and romping adventures, fall and winter are about taking action, getting down to business, and eking the juice out of each precious day left in the year.

So, it’s no wonder that the Fall 2017 Paris fashion shows were some of the most hotly anticipated of the year. Everyone loves fall fashion.

The Chanel show, helmed as usual by Karl Lagerfeld, was heavy on whites, grays, blacks, and silvers. Glittering, eye-catching headbands atop teased hair adorned nearly every model, giving them an angelic, otherworldly look.

Also at Chanel was British model and It “Girl” (she is 24) Cara Delevingne. The model has also made a foray into acting as of late, yet remains a modern-day style icon with her cool, chic style, coupled with a fun, irreverent nature, befitting of a modern woman.

The model/actress wore Supreme brand boxers sticking out of her white trousers at the Chanel show. She also wore a gold Chanel choker too. The pairing of the evergreen-cool skater look (Supreme’s specialty) to an attendance at Chanel was a blend Delevingne does well: the expected and the unexpected. Her bleached blonde hair chopped into a bob was a departure from her normally wavy light brown, with sun-kissed highlights, longer tresses. You know what they say about hairstyle changes – that they are often outward indicators of inner changes. It’ll be interesting to see what Delevingne does next with her look and her career.

Other celebrities like Alicia Keys, Swizz Beatz, Kate Moss, and more, braved the crowds, all in the name of fashion.

Moncler had some of the most unique looks, with plaid slippers, knee high thick socks, space-age brightly colored glasses, and patterned dresses and tops. Giambattista Valli’s show was stocked with bright reds, lace-up boots, and Moulin Rouge-esque flouncy skirts. Louis Vuitton was a mix of old and new, with leather jackets and classic bags, paired with mermaid-red hair color and orange furry jackets that looked like they were made from Wookiees.

But Fenty x Puma won the award for crazy hair, with bright greens, purples, and pinks on the runway, with bold, eye-catching makeup, like highlighter-green eyeshadow from lower lid to bottom of brow. Hermès turned it out with their classic purses in different sizes and colors, along with floor-length jackets and dresses. Chic looks from Stella McCartney, Isabel Marant, Miu Miu, Balmain, Sonia Rykiel, Elie Saab, and Dior, were also fan favorites.

Yves Saint Laurent gave Chanel a run for its money with glinting, shimmering sparkles and sequins on models. A pair of Moncler sunglasses might’ve been handy for those in the Saint Laurent front row. The Saint Laurent show was the second one helmed by Anthony Vaccarello.

Fashion week is many things. But one of my favorite things is its transformative ability to turn the streets of Paris into a runway unto itself: flanked by celebrities and pedestrians alike, who always affirm the age-old truth:

There are no rules in fashion.

Previous Article Towering Above it All: The Eiffel Tower
Next Article The Ins and Outs of Local Market Produce in Paris