Pancakes in Paris: An Entrepreneurial Tale 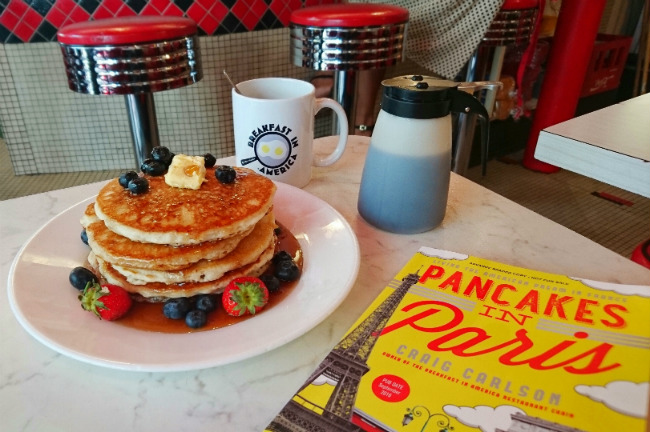 Pancakes in Paris: The real thing . . . plus Craig Carlson’s new memoir about bringing a pancake dream to Paris.(© Craig Carlson)

A bottomless cup of coffee? In Paris? C’est pas possible!

That was just one thing American Craig Carlson missed in Paris years ago, along with a good old American breakfast—eggs, bacon, and pancakes slathered in real maple syrup.

And so, he embarked on a dream. A syrupy vision quest. With solid business sense, humor, and an admirable ability to rise to the many challenges of starting a restaurant in Paris, he gave birth to the Breakfast in America diners. And, although the birth underwent a long and demanding labor, it seemed to be Craig’s destiny to become “the pancake man.”

The pancake man—a former Hollywood scriptwriter—has now written a memoir that follows his stumbles and sprints to success. We might think he is a lucky man to have achieved his dream. And he is.

But, as his story unfolds, we see that it was not just luck, but also his perseverance, the support of his friends, and his ability to think creatively that enabled him to succeed despite a barrage of obstacles. 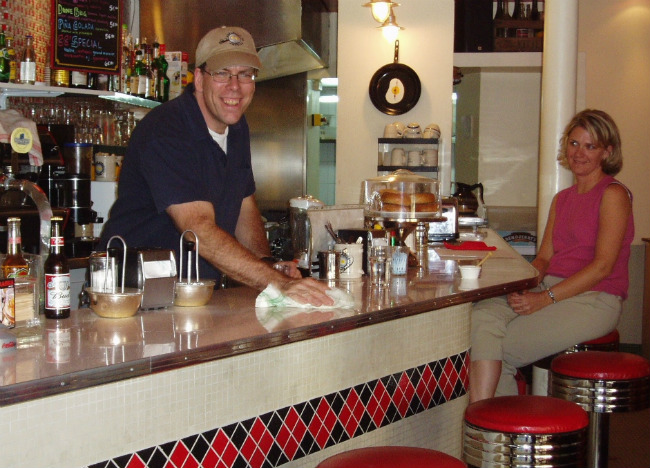 Step right up for your bottomless cup of American coffee. (© Alexander Chodak)

The memoir, titled Pancakes in Paris, is a useful “how to” manual (and, in some cases, a “how not to” manual) for each step of setting up a business in France—a good guide for fledgling entrepreneurs.

Getting funding; finding space; working with architects, electricians, and suppliers; hiring employees (attempting to fire employees); marketing a concept; connecting with customers; depending on friends; building community—these “to do” tasks are at the core of this book.

The memoir is also an entertaining story of life, in the author’s natural voice, full of heartwarming moments, inspirational quotes, and vividly drawn characters.

A “Pancakes in Paris” reading on the recent California book tour. (© Meredith Mullins)

As Thomas Jefferson said, “Every man should have two countries: his own and France.

Craig has a deep-rooted love of France and relishes being “a goodwill ambassador between the two places” he loves.

He was proudest of a review of the Breakfast in America (BIA) diners that proclaimed them a “cultural crossroads between conflicted countries.”

Craig Carlson is a storyteller—about building a cultural bridge between France and America. (© Meredith Mullins)

He admits to walking the fine line. When he began planning for BIA, he had crucial choices to make. Should portions be huge like American breakfasts or reasonable like the French? Should savory and sweet be separate or on the same plate (and “can you please pass the ketchup?”). Should he serve U.S. or French wine? Should the juke box play Johnny Hallyday or Bruce Springsteen? Could he find the real taste of the American diner food through French source channels?

Attacking each challenge with the ultimate goal of authenticity, he solved every puzzle in turn.

The hardest food to find? American bacon. The book describes his search.

First, the local butchers supplied lardon, but it was so filled with cartilage that it almost broke the slicer. Next came something akin to Canadian bacon, which wasn’t bad, but, after all, the diner was not going to be called “Breakfast in Saskatchewan.” Finally through a source that was supplying EuroDisney, he found the perfect product … and brought home the bacon.

Neither snow, nor rain, nor cold of day can keep them from Breakfast in America. (© Brian Downie)

His first customers taught him how special it was to make a connection with new friends over food and conversation. His first employee taught him the darker side of French labor law. And his life in Paris taught him to love what we all appreciate about this great city.

With all its ancient buildings, Paris had a wonderful way of reminding you how quickly life goes by, how we’re all just passing through—while at the same time, it forces you to slow down and enjoy every precious moment while you can.

And let’s not forget about that bottomless cup of coffee. C’est possible! As much American coffee as you want—called jus de chaussette by the French. Come into any of the three Breakfast in America restaurants and savor endless sock juice. It will last until your last delicious bite of syrupy pancake. 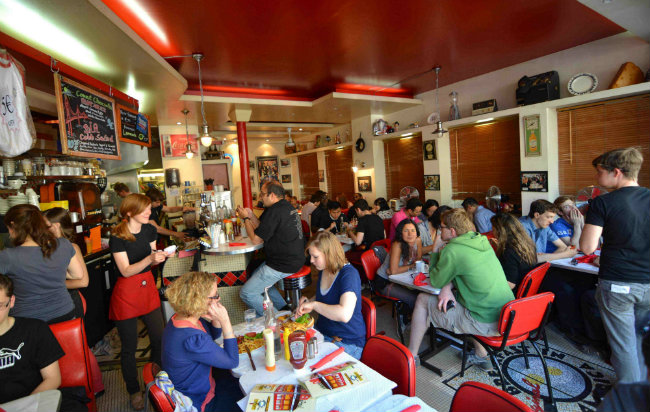 A community of diner lovers—French, Americans, and tourists of all nationalities. (© Craig Carlson)

Craig Carlson will be presenting “Pancakes in Paris” at the Abbey Bookshop on Thursday, September 29 at 7 pm (29 Rue de la Parcheminerie, 75005). The public is invited. 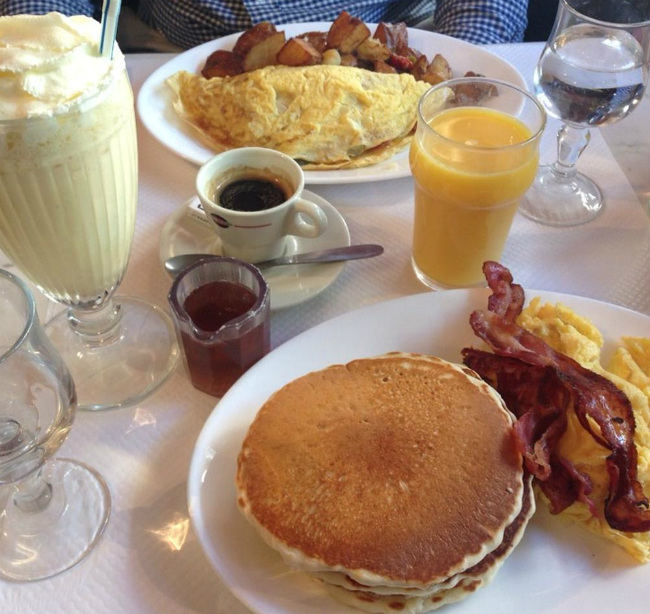 Breakfast at Breakfast in America