Where to Eat in September: Paris Restaurant Buzz 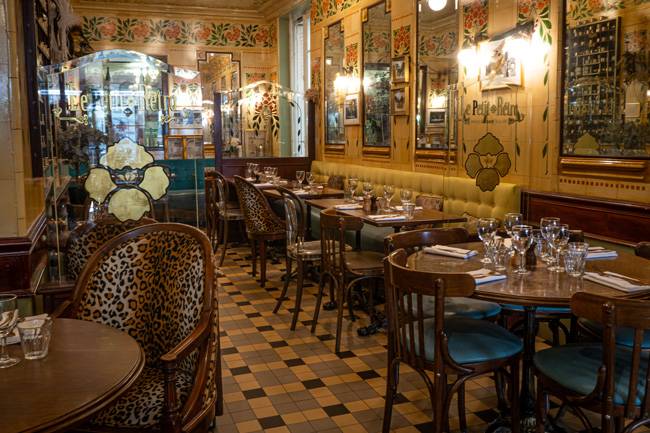 “In France, cooking is a serious art form and a national sport.” – Julia Child

It’s that “la rentrée” time of year again. A French tradition since the 13th century, it’s when children return to a new school term, students to uni, new restaurants launch and there’s a refreshing, inquisitive buzz in the air. Everyone’s asking “quoi de neuf?” Here are some culinary and cultural answers. Bonne rentrée!

New owner Guy Savoy says this spot is a nod and a wink to his bistro roots in Bourgoin Jaillieu (near Lyon), where his mother ran a restaurant. And to his very first eponymous bistro (1980) on rue Duret, a tiny side street just off the achingly posh Avenue Foch in the 16th arrondissement.

If you’re searching for a unique experience while in Paris, the Dorchester Collection has launched a series of tours that “meet the growing demand of our clientele for intimate, bespoke, exclusive tours and experiences.”

Guests at Le Meurice, which struts an impressive history of art, can slip behind the scenes to explore Montmartre as seen through Picasso’s eyes, stroll through the enchanting Tuileries Gardens to discover Monet’s incredible outdoor painting techniques. “These unique tours aim to reinforce the hotel’s strong connection with the art world (In 1918 Picasso and Olga Khokhlova’s wedding reception was celebrated in the sumptuous Salon Pompadour) so guests are able to discover the rich art and culture heritage of the city in a new light,” says Le Meurice.

On a private walking tour in. the footsteps of Pablo Picasso (1881-1973), you can learn why his masterpiece Les Demoiselles d’Avignon remained rolled up and neglected in his studio for years, how Picasso paid for drinks at the boho cabaret Le Lapin Agile and…. how he became implicated in a theft at the Louvre!

Rates from €1,320 for two sharing a Superior Room or Suite, including American breakfast with Cédric Grolet pastries and a two-hour expert guided tour.

And/or, tap into the fascinating history of Claude Monet’s (1840-1926) Revolutionary Brushstrokes, revealed via a visit to the Tuileries Gardens and Musée de l’Orangerie. Why was Monet – universally admired today – considered so radical and rebellious in his day? How did the artist develop his plein-air technique and turn the term ‘Impressionist’ from critic’s slur to artistic revolution?

Rates at Le Meurice from €1,470 for two sharing a Superior Room or Suite, including American breakfast with Cédric Grolet pastries, a two-hour expert guided tour and two entry tickets to Musée de l’Orangerie.

“Design a space that has the patina of time and evokes vintage boulangeries,” is the brief Monsieur Ducasse gave architect Camille Chevrier. To his successful sellout Manufactures of chocolate, ice cream and coffee, Alain Ducasse now proudly adds beautiful hand made biscuits!

“The quality of the ingredients are essential,” he insists. “Each biscuit has a personality of its own, artisanal in manufacture, modern in design.”

From a vast choice, taste the Hexas, a tribute to the Hexagon. And, the unique shortbread cookie made to order: chocolate, hazelnut or lemon. The lemon, made with homemade lemon marmalade and lemon zest paste sprinkled with grated zest, are garnished with thin slices of candied lemon. Yum! Canadian pastry chef Flora Davies pounds the butter from La Ferme de Haute Folie with flour from miller Philippe Guichard, Madagascar chocolate, honey Chambron, hazelnuts from the Corscian mountains. Have biscuits ever tasted so good? Price from €4.

At long last, the Maison Serge Gainsbourg is prepping to open inside the star’s former, left-bank hôtel particulier. Much graffitied, it’s been a pilgrimage site for many fans over the years, and now will finally house a museum.

“I am incapable of mediocrity,” Gainsbourg once declared. And so expect big things at the museum’s café , slated to open this autumn. Called the Gainsbarre, it’s a collaboration with the popular Moma Group. It will morph into a piano bar by night. Je T’Aime… Moi Non Plus

François Gagnaire at the Café Renault

The talented, passionate Gagnaire (no relation to Pierre!) hails from the Auvergne region and honed his craft with the likes of Alain Chapel, Pierre Gagnaire, Guy Lassausaie and Philippe Chavent. He scored a Michelin star at the restaurant of the Hôtel du Parc (Puy-en-Velay) before leaving for Paris – and the Hôtel du Collectionneur, subsequently launching the bucolic style bistro Anicia, rue du Cherche Midi in 2015.

And, with a modular interior the ground floor space of the Atelier showcases exciting exhibitions throughout the year.