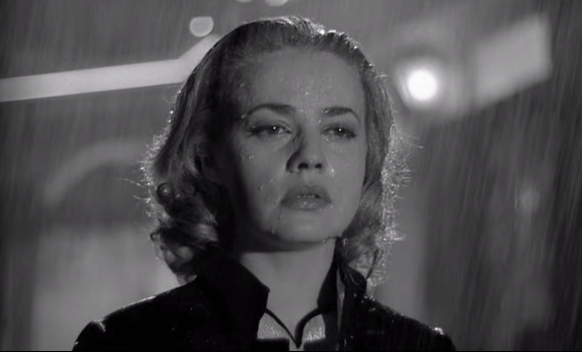 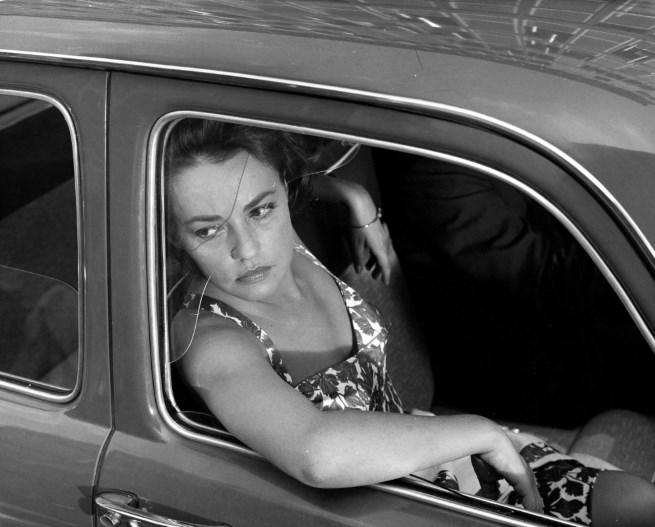 In an age where the words “icon” and “legend” are common, and sometimes undeservedly used, the death of Jeanne Moreau was a reminder of the true meaning of these accolades, for Jeanne Moreau was quite simply an irreplaceable force in French cinema.

Hugely talented, innately intelligent, a director’s dream, she lived her life as she wished with uncompromising honesty. She did not suffer fools gladly. Her sultry, sensual looks and unforgettable, husky, smoker’s voice were instantly captivating.

Although Moreau never complied with the Hollywood model of beauty and indeed Moreau herself never believed that she was either beautiful or sexy, it was Louis Malle who was the first director to really recognize Moreau’s distinct look. He knew instinctively that she was not in need of heavy, Hollywood make-up. She simply looked like a real woman without any artificial help.

She was born in Paris on January 23rd 1928, the daughter of Katherine (nee Buckley), an English dancer in The Tiller Girls troupe who performed in the Folies Bergère. Her father Anatole-Desire Moreau was a restaurateur and bar owner. The family soon moved to Vichy where Anatole came from a long line of farmers. Moreau loved the freedom of the countryside where she could run wild and escape the fallout of her parent’s increasingly troubled marriage. Anatole was a heavy drinker and for a while Katherine took Jeanne and her sister Michelle back to England to live. They returned at the beginning of the war but the family were soon separated as Katherine, being English, was compelled to return to Paris to register daily with the Gestapo. They lived above a brothel in Montmartre. When Katherine was once more reunited with her husband and the arguments resumed as before, Jeanne would escape to the brothel below where the prostitutes would console her.

Despite being forbidden by her father to go to either a cinema or a theatre, Jeanne sneaked off to see a performance of Jean Anouilh’s Antigone. She was 15 years old and was ‘overwhelmed’ by the experience.

Her father’s reaction on being told that she wanted to be an actress was to slap her face and call her a whore.

Moreau was undeterred and made her debut at the Comédie-Française when she was 18 years old. Her prodigious talent was recognized instantly and although being cast in nearly every production the Comédie-Française put on she tired of the mindset of the other actors and left when her contract was up for renewal. She had in the meantime married Jean Louis Richard and had a son Jerome, but the marriage foundered before the boy was a year old.

It was her performance as a prostitute (taking over the lead role when the star fell ill) in Anna Bonacci’s L’Heure éblouissante, a play that subsequently ran for two years, that propelled Moreau to a fame that would never diminish for the next 60 years.

Jean Cocteau, George Bernard Shaw and then Peter Brook all clamored for Moreau in their productions. Convinced she was not right for the part of the sex hungry Maggie in Cat on a Hot Tin Roof, Peter Brook had to persuade her to take the part in the Tennessee Williams production. New York was wowed and Louis Malle, in the audience, had found his leading lady for Ascenseur pour l’échafaud (Elevator to the gallows). This dramatic film, with a haunting soundtrack by Miles Davis, was to prove Moreau to be just as profound and talented on the screen as on stage. Miles Davis was to become Moreau’s lover during the filming, but it was Louis Malle, on casting Moreau for Les Amants, (The lovers) with whom she had a passionate affair, ending only when the publicity and brouhaha over the film proved too stressful for Moreau for the liaison to continue.

Moreau had always valued her privacy and for a while contemplated giving up acting altogether. She moved to Versailles from the Latin Quarter– Moreau always rented, never cared to be tied down with property– for some peace and quiet. 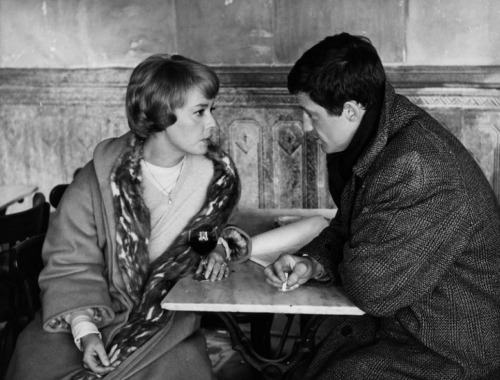 Moreau’s biggest success was yet to come in 1962 when Truffaut offered her the part of Catherine in Jules et Jim. The director and Moreau spent many months together in the South of France where their close friendship spilled over into a passionate affair. (Truffaut was not the only director to be waylaid by Moreau’s charms; in 1966 Tony Richardson directed Moreau in two films, Mademoiselle and The Sailor from Gibraltar. Richardson fell madly in love with Moreau, leaving his wife Vanessa Redgrave for her during the filming. Redgrave, although devastated by Richardson’s betrayal, stated with more than a hint of graciousness that, ‘Any man who didn’t love Jeanne would have to be blind and deaf. I, of the same feminine gender, have the same admiration, awe and respect.’)

There weren’t many men who were blind and deaf, and after the filming of Jules et Jim, Jeanne was introduced to Pierre Cardin. This unlikely coupling, resulted in an affair that lasted five years. She became his favorite model and they traveled extensively together although Moreau continued her career unabated. 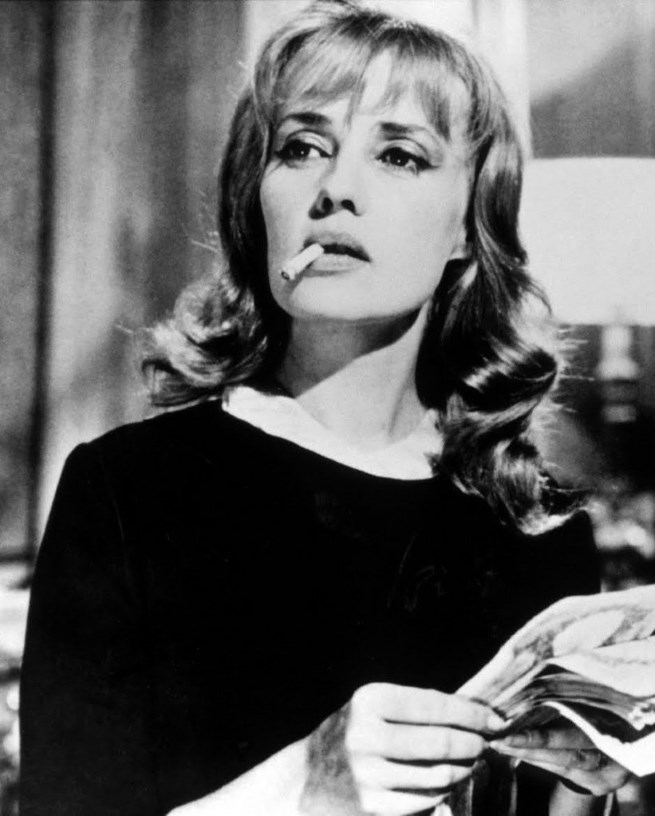 Jeanne Moreau in Eva directed by Joseph Losey in 1962

It would be easier to name the directors that Moreau didn’t work for. She was in demand internationally and appeared in films by Orson Welles, Joseph Losey, Carl Foreman, Michelangelo Antonioni, Alfred Hitchcock and Luis Bunuel.

Moreau had a year off, regrouping and resting and retired to her home in the South of France. She was 40 years old and had made 50 films. A Hollywood western starring Jack Palance and Lee Marvin (with whom she had a brief affair) put her back on the treadmill.

After directing two films herself, Moreau married for the second time William Friedkin, a Hollywood director. Moreau moved to Los Angeles but the marriage was short lived and Moreau returned to her beloved France and rented an apartment overlooking the Seine in St Germain. She rested for almost nine years, only appearing half way through this period in Querrelle where she played a brothel madame.

In the 1980s Moreau’s career took off again. She appeared in plays, films and TV series and was already vaunted as a legend in her own lifetime.

Her awards were numerous; the fellowship of the British Film Institute, The Legion d’Honneur, a Golden Lion at the 1991 Venice Film Festival and a European Film Academy Lifetime Award in 1997. In 1992 she won the Cesar for best actress in The Old Lady who walked in the Sea (La Vieille qui Marchait dans la Mer).

Jeanne Moreau was still acting in 2009, had appeared in more than 130 films, had released several albums and appeared with Frank Sinatra at Carnegie Hall.

She disliked giving interviews, did not believe in looking back or any form of nostalgia so perhaps her best epitaph comes from herself.

But I shall be very young.’

Previous Article Not Everything in Paris is Closed in August – Here are Some Delicious Ideas…
Next Article Celebrating the Life of Christian Millau, Co-founder of the Gault & Millau Guide