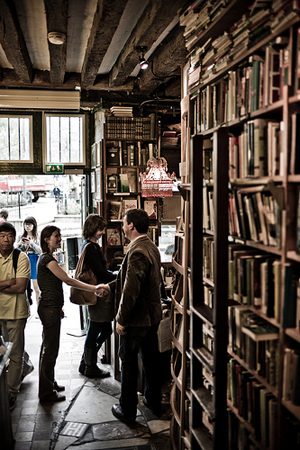 “Ah, the Beats,” an Irish-heavy voice sighed from behind me. “If you’ve read the Beats then you must, of course, be familiar with Fante?”

I turned from the shelf of books I’d been examining. My inquisitor was a rather short man of perhaps seventy years old wearing a cap pulled low over one eye and a tweed suit that looked as if it had been out of fashion forever.

“John. John Fante. He started what the rest of them finished. Oh, I loved them all a great deal, the Beats.” The man shook his head with reverence. “I used to own a bar in Dublin where they’d all come and read–Jack and Allen and the whole bunch. I love them and I love books. That’s why I come here every time I make it through Paris.”

‘Here’ referred to the Shakespeare and Company Bookstore and ‘the Beats’ were of course Allen Ginsberg, Jack Kerouac, William S. Burroughs, and a whole mess of others who don’t prerequisite a mention. I understood the man’s reverence. I myself had come to the Shakespeare as part of a pilgrimage of sorts.

To bibliophiles, the bookstore stands as a Mecca of the written word. Today it is situated on the edge of the Latin Quarter looking out over the Seine. Its original location had been host to most of the great names of 20th century literature–Hemingway, Nin, Miller, Joyce, Pound, and many others. Sylvia Beach had established the shop in 1919 after expatriating from the US. I wonder whether she knew at the time what a historical role it would come to play within the literary community? It was Beach who first published Ulysses, and when the store was shuttered during the Nazi occupation, rumors flew around that it was due to her refusal to sell a German officer her final copy of Finnegan’s Wake. She was a woman of fine principles, Sylvia Beach. 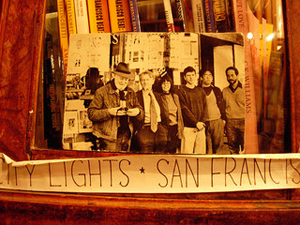 The old Irishman went on to insist that Fante was the author I’d come for, and was particularly excited that I had never heard of Ask the Dust. He purchased it for me on the spot, then bid me adieu.

After my literary benefactor took his leave, I began chatting up the girl who was running the counter.  She was an American, and she told me that she had come to Paris to visit four years ago and had ended up staying, that she simply hadn’t been able to bring herself to leave. I could understand her reasoning. I had only been in town for two weeks, and it already had the feeling of home.

She gave me a mischievous look. “Have you seen the rare books room yet?” I told her that I had not. “Right now it’s closed to the public for renovations, but I have the key…Want to take a look?” Of course I did.

We went outside to a door that stood adjacent to the rest of the shop, and in a moment I was in a treasure trove of literacy. Everywhere I turned my gaze there were masterpieces–a first run of Tropic of Cancer, an aged-but-sturdy volume of Gargantua and Pantegruel, and handwritten manuscripts from Joyce, Fitzgerald, Strindberg, and others.

Through the open door the clerk saw someone enter the bookstore, and she said that she had to get back. She locked up and we nodded our goodbyes and I went off to find a quiet place to read the Fante.

Paris may be the finest place in the world in which to enjoy a book, or anything, for that matter. I made my way to the Luxembourg Gardens and found an out-of-the-way spot where I reclined on the grass. I opened the book to the first page and I read it. Then, I read the second. After an immeasurable amount of time I pulled my head from the book and was surprised to find that the light was failing and that I had made my way through nearly 100 pages. He was right, the Irishman. It was a good book. It was one of the best books. And I stood and knew at once that I had to find wine, and I felt exceedingly lucky knowing that, in Paris, the streets practically flow with wine, and literature, and romance, and that there is a story on every corner and behind every window. I made my way out of the garden in search of them all.