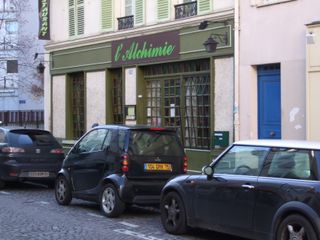 The great Anglophilic food writer, John Whiting, from whom I was separated at birth (if you don’t believe me, take a look at our photos side by side) frequently quotes English food historian Jane Grigson as having said, “We have more than enough masterpieces; what we need is a better standard of ordinariness.”

Whiting is a master at finding the better standard of ordinariness-type bistrots in Paris and today I ate at one touted by another dear friend who lives in the quartier.

What made it qualify as “a better standard of ordinariness”?  Well, first off, while in a well-trafficked part of the city (just off the Rue de Commerce in the 15th) it was not packed, and certainly not packed with Anglophones, except for myself, everyone else was French and best as I could determine, relatively local.

Second, it had no pretensions, sure they had the usual Pudlo/etc stickers in the window and two nice reviews discretely hanging near the comptoir but nothing that shouted: “hey, we’re great.”

Third, like the diners I took girls to on our first dates, there were menus, that is cartes, encased in frames on the walls besides each table, no mammoth book to struggle through.

The bread was hot and fresh and about the best I’ve had this fall.

On the menu were expensive items (e.g., scallops) with no supplements as well as more inexpensive products (e.g., beef and chicken).

The prices were most reasonable: 18 E for a plat (for instance the scallops) with a glass of wine; a 2 course (no forced choice) pix fixe at 25 and 3 courses for 30 Euros; wines by the glass, carafe and bottle from 19-the sky.

While the waiter asked how we liked things, he was not in our face and the chef (Eric Rogoff) despite having passed through some great kitchens – Senderens at Lucas Carton, Jean Bardet inTours, Henri Faugeron at (I think) the Relais Gourmand Faugeron and at an old favorite of mine, the Petit Colombier – did not hit us over the head with his pedigree nor work the crowd.

So I owe this one to my old friend Pierre45.  Thanks buddy.  It was another “better standard of ordinariness.”

Where we ate was at:

To Tell or Not to Tell: That is the Question