Enter an imposing 17th century building that once housed a quincaillerie, or hardware store, in the heart of the Haut Marais, and you’ll instantly feel transported to Japan. Welcome to Ogata Paris, a newly opened cultural complex dedicated to all that defines the rich and refined Japanese culture. The mastermind behind this highly anticipated venture and for whom it’s named, is Shinichiro Ogata, Tokyo-based architect, designer, restaurateur and chef. He too is responsible for almost every design element, from the clean lines of the décor to the tasteful tableware.

Ogata’s vision of Japan includes a tea shop offering Japanese confections, a ceremonial tea salon, a gallery featuring carefully curated art from tableware to furniture, a crafts store displaying delicately hand-crafted housewares, an intimate bar and a gastronomic restaurant, all connected by sahō – the Japanese art of being. Within this vast 800-meter square space, Ogata’s goal was to demonstrate the five pillars of the Japanese dining culture – tea tasting, proper use of utensils, savoring a meal, hospitality, and contemplation.

At one end of a top floor defined by long railings overlooking the foyer, the brightly lit restaurant is composed of wedge tables and a long counter, allowing you a glimpse into chef Kazuki Watanabe’s open kitchen. His modern take on Japanese lunch specialties includes a seasonal bento box filled with sweet and savory tastes followed by a choice of entrée and main. Included in the offerings are salad with duck and black vinegar pear, and donabe nikujaga, Japanese pot-au-feu served in an earthen pot with beef hangar and hand-selected vegetables. The multi-course meal ends sweetly with matcha blanc-manger. Meanwhile, the plentiful dinner menu favors à la carte options and sets a more sober tone.

Head to the lower level for a taste of history at the discreet Japanese tea salon, or sabō as it’s called locally. At the hand of a tea master, discover the traditional Japanese tea ceremony dating back to ninth-century Japan. The space itself is outfitted in 17th century stone walls with the central table composed of jindaitamo wood, also known as the tree of God. Just outside the door the trickle of a waterfall sets the scene for reflection, just like Ogata had hoped for. 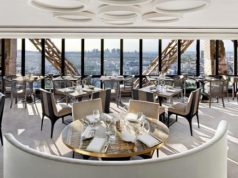