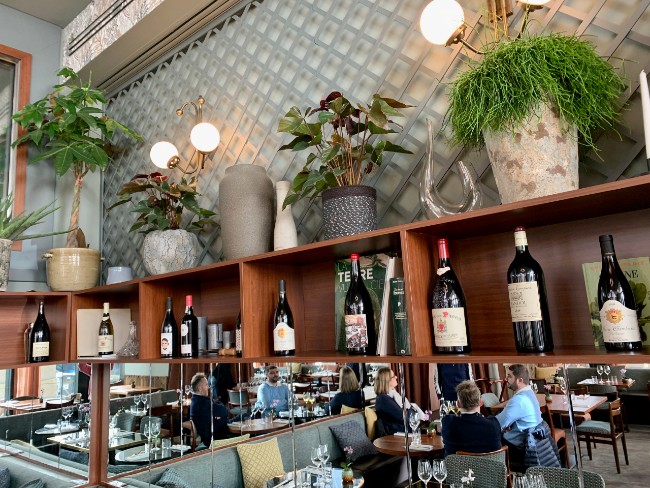 It’s a crisp winter day when I push open the door to Mordu, a recent addition to the rather traditional restaurant scene in Saint-Germain-des-Prés.

The restaurant feels airy and welcoming, decorated by Elodie Tornare in hues of terracotta and sage, with warm touches of reclaimed wood on the paneling. It is still quiet, the lunchtime rush yet to arrive, but I wanted to come early for a chat with the man behind Mordu, Nicolas Paradis. 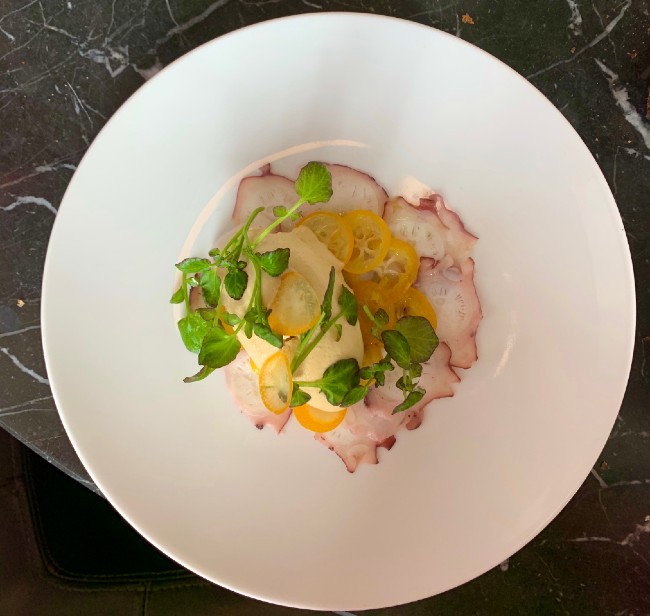 Nicolas co-founded Ô Chateau, an upscale wine bar, in 2004 in Paris. Neither he nor his associate had any previous experience in the business, besides being passionate wine connoisseurs, but they believed in the project and threw all they had into it. Their aim was to bring a new kind of wine destination to a city where there was not much on offer between traditional bars (where the quality was not great), and gastronomic temples (where great wine was an integral part of the meal but not the star of the show).

Fast forward to today, Ô Chateau is probably the most popular wine bar among English speaking patrons, be they travelers or expatriates living in the city. Likewise, Les Caves du Louvre, opened in late 2015, has gained a faithful following, not only with travelers but also with local corporations for client and team building events. 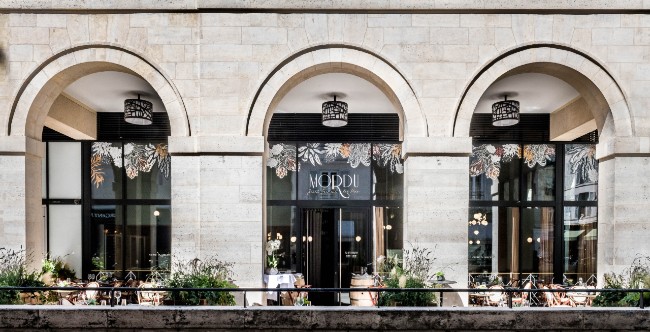 Because Nicolas likes a new challenge, since 2017 he has ventured into the restaurant business: first, a bistrot à vins called Cépages, situated at Villages Nature near DisneylandParis, and now with his most ambitious opening yet, Mordu.

If you have been following the restaurant scene in the city recently, you will have noticed that talented young chefs are consistently choosing to open their first restaurants in the eastern parts of the city, mostly in the 9th, 10th and 11th arrondissements. It’s not just that the clientele there is more culinarily adventurous than in the west, it’s also (or maybe most of all!) that rents are lower, a clear plus when starting out. 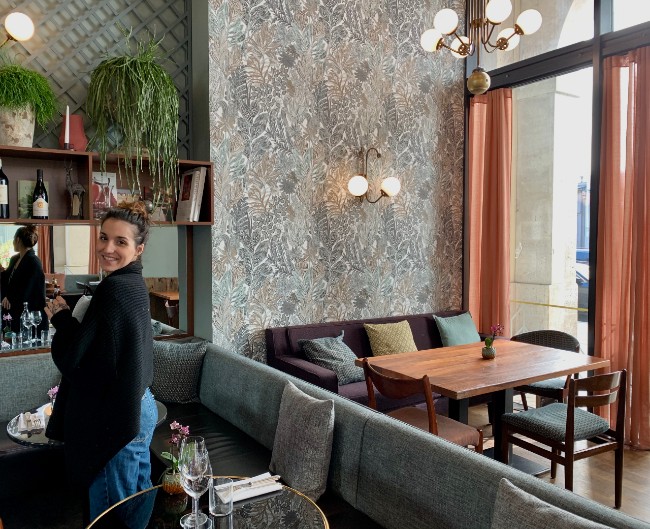 Mordu aspires to bring this type innovative cooking to the more bourgeois Rive Gauche. The menu is simple and changes every day. All produce is in season, organic wherever possible. Baptiste Trudel, the 32-year-old chef, was trained by the best, Guy Martin, the two Michelin star chef at Le Grand Véfour. But his tattooed-arms and piercings betray a rebel soul that shines through when revisiting the classic staples of French cuisine: the terrine is made lighter and brighter by the addition of orange zest; the octopus carpaccio is accompanied by a smoked eel ice-cream that, despite my initial doubts about the pairing, adds an unexpected depth of flavor; the cod is perfectly cooked, the butter-based sauce contrasting nicely with the fresh herbs that accompany it and, finally, a smattering of loomi (black lemon from Iran) powder manages to turn a traditional île flottante into a much sexier dessert. 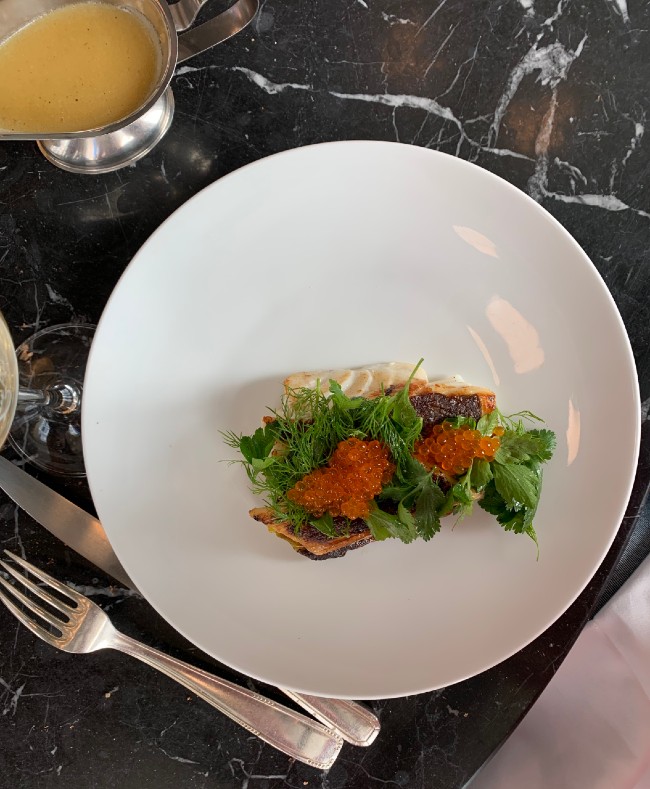 To accompany our feast, Olivier Machado, the 30-year-old sommelier, has suggested an Austrian white wine, Grüner Veltliner, produced by the Schmelzer winery. It is a dark golden color, a sign that it has been fermented for a few weeks with the skins on, but its fruity taste is more similar to an exotic Sauvignon than to a fully fledged, more tannic, orange wine.

It is no surprise that wine has pride of place in Mordu’s offering, considering Nicolas’s other business ventures. Here, in keeping with the bistronomic angle of the cuisine, the choice has fallen on natural wines, organically produced or biodynamic, with little to no chemical additives. I am grateful for this decision as I get on with my afternoon, meeting after meeting, with no headache at all, even if I normally never drink at lunchtime, and am in general, in the words of a former British boyfriend, a “cheap date” liquor-wise. 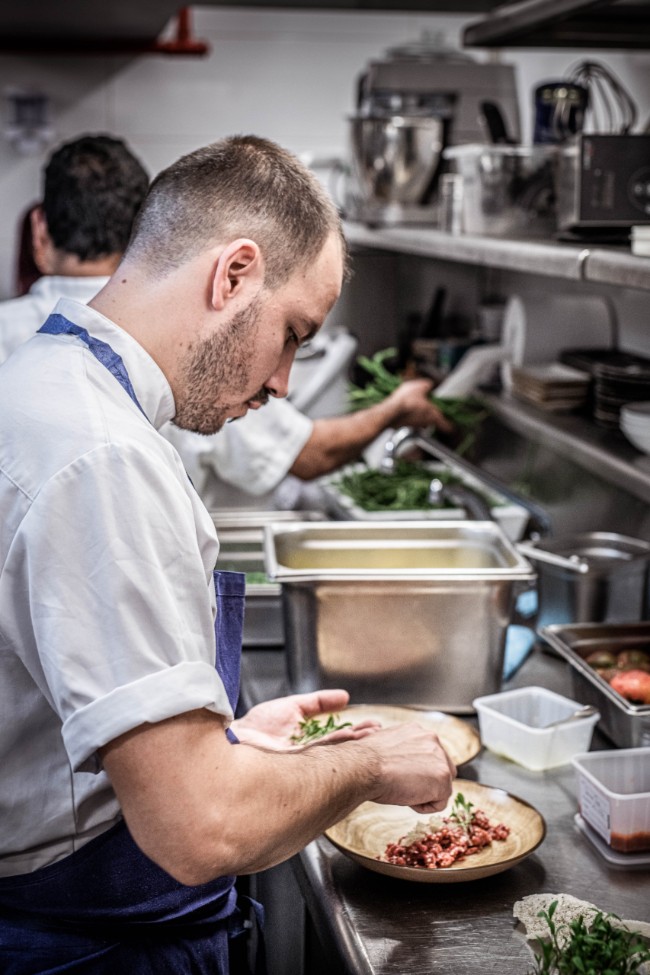 Baptiste Trudel in the kitchen at Mordu. Photo: Caspar Miskin

While Nicolas admits that breaking into the conservative restaurant landscape of Saint Germain has been a challenge, Mordu has been quietly building a reputation among the fashionable crowd, happy to find on their doorstep a kind of cuisine they normally had to travel to the other side of the river for. I, for one, will go back, hoping that one day soon this wine connoisseur turned restaurateur will decide to wake up my sleepy neighborhood in Western Paris, too.

Mordu, located at 2 rue Félibien in the 6th arrondissement, is currently open Tuesday to Saturday (and soon on Sundays too), for lunch and dinner. A two-course lunch starts at 26€, while the 7-course tasting dinner menu will set you back 65€ (add 40€ for wine- pairing). 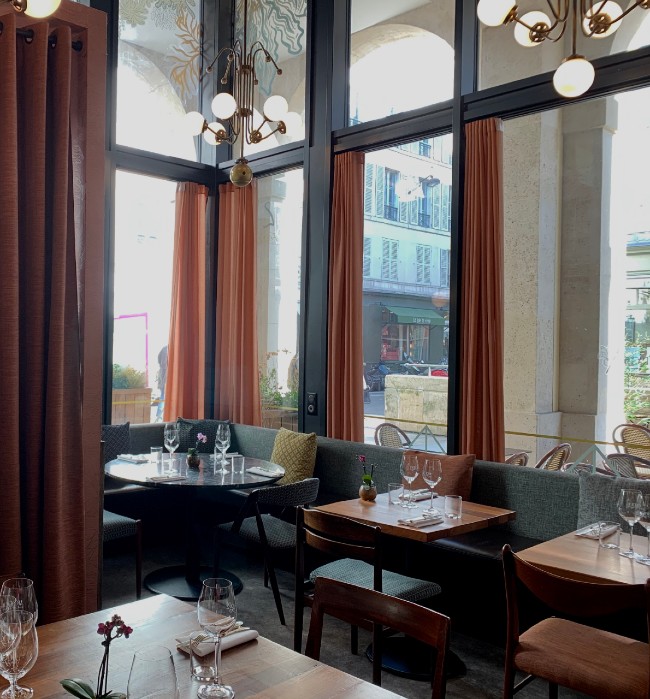