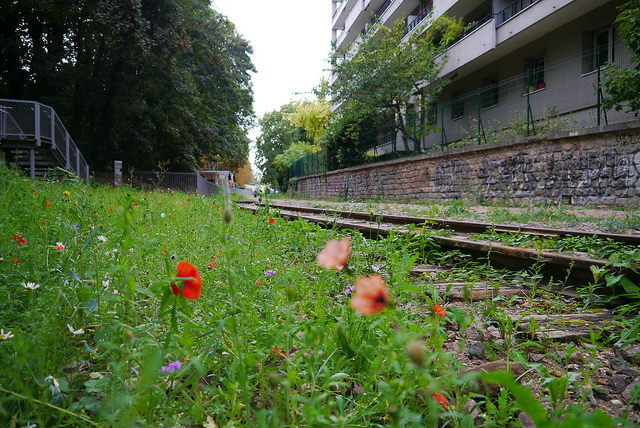 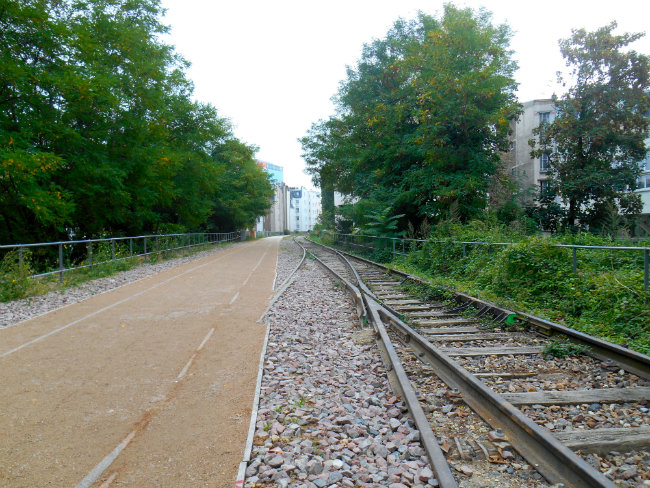 The Petite Ceinture in the 15th/ by Gregory Ross

[Editor’s Note: In addition to this lovely park in the 15th arrondissement… The organization petiteceinture.org is actively engaged in the safeguard of the Petite Ceinture, and the old railroad has sprung back to life with hot spots like La Recyclerie, housed in one of the old railroad stations.]

The railroad had been abandoned. A remnant from the era of Napoléon III, the Petite Ceinture was a circular connection for the whole of Paris in a time when its neighborhoods were distinct villages without transportation between the main stations. When it was completed in 1869, the Petite Ceinture connected the whole of Paris for the very first time. People could commute from village to village, station to station. And then its tracks were closed. The uninterrupted passage of time has metamorphosed the tracks into a haven of wildlife, sprouting trees, shrubs, ivy, fields of grass, flowers, and exotic flora and fauna. The 20 mayors of Paris (one for each arrondissement) have engaged in a yearly debate on what should be done with the Petite Ceinture. Some have decided to remove the infrastructure altogether. Others have watched their division of the rail line collapse further into the annals of time.

Poppies on the Petite Ceinture by Groume/Flickr

While wandering through the southern edge of the 15th arrondissement on a warm afternoon, I almost gave up looking for the park. I had walked around the block for 15 minutes and I was tired of looking for the mysterious entrance. More research had to be done, but I was in no mood to go back home just yet. The day felt wasted. I had nowhere else go to in this area of Paris. So I walked further south. I knew that the Petite Ceinture ran near here, but all of its train stations had been boarded up, and trying to locate a separate entrance was not on my agenda.

On rue Balard I saw something odd. There was a green sign designating an entrance to a park, but there was no park anywhere near the metro station. My heart began to flutter. I ran up the winding staircase. The sign on the railway line read: The Petite Ceinture of the 15th. Interesting. The tracks are still here, just as I had imagined. Trees and flowers lined the way, and signs along the lines listed all of the exotic flora and fauna that exist along the rails. 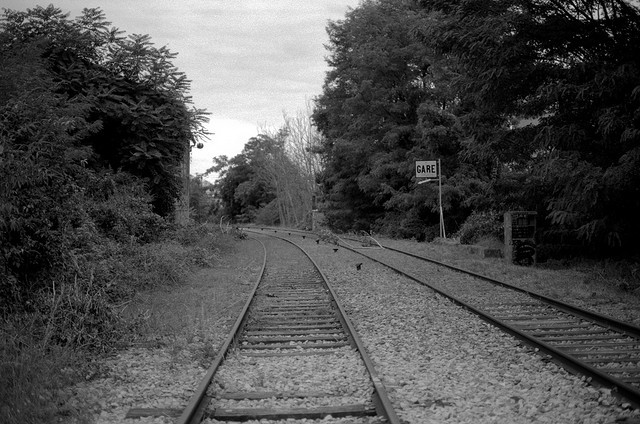 This section of the Petite Ceinture is one of the only two open to the public, and from the research that I have done, it seems that this park opened sometime between August and September 2013. The 15th arrondissement has spent a tremendous amount of time and money in preserving the intimacy of the railway by cleaning the tracks, creating a sleek path for people to run on, building benches for people to sit on, and constructing modern glass elevators for the elderly and handicapped to ride in.

The trees are not planted, but very wild. Flowers are everywhere, dotted into the landscape in a hodgepodge of colors and varieties. The trees are thick and green, and you will hear birds flying between the dangling branches. At times I thought I was dreaming. Towards the middle of the park there is a deserted railway station above rue Lecourbe. The building is made of red bricks and someday it may be reopened to house a restaurant or café. 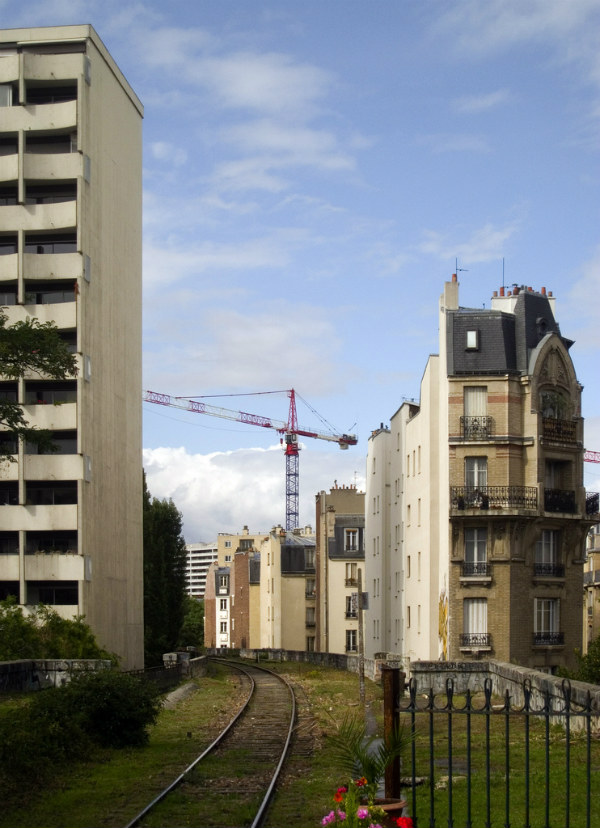 I kept walking down the tracks and listened to the birds. I ran into two cats along the tracks and they were very friendly. One had his head between the gate that runs along the tracks; the other was sitting on the tracks, looking at the birds. I spent much of my time alone on the rails, never fearing for my safety. At the end of the park there is a tunnel. The tunnel is fenced up, but you can stand at the entrance and peer through the darkness to the other side. A glass elevator sits at the tunnel entrance, and if you wish to get in the ride is smooth and quick. It will glide to street level. There is also a long winding walkway that you can walk along.

Hidden Parks of Paris by Gregory Ross. Published by Editions L’improviste, 2014. 212 pages. Excerpt reprinted with permission from the author. Available now on Amazon.

Lead photo credit : Poppies on the Petite Ceinture by Groume/Flickr