Paris has always been a trailblazing city.

In 1878, the city installed arced electric street lamps – they were the first city to do so. Restaurants, as we think of them, began in Paris. SCUBA attire was invented there too. Movie-going began in Paris when the Lumière brothers showed their film shorts and collected admission for it.

Paris’s René-Théophile-Hyacinthe Laënnec invented the stethoscope. The metric system started there, as did haute couture, photography (by Parisian Louis Daguerre), and of course, countless French food and drink creations.

So, it’s no surprise that Paris is continuing its tradition of forging paths by planning to open its first nudist park.

The Telegraph reports that France is the leading nudist destination in the world. There are 155 naturist holiday centers in France. Thus, it would make sense to have Paris join in on the fun that the rest of the country is having.

Paris’ Deputy Mayor, Bruno Julliard, said of the matter on BFM TV: “I’m for it and I believe the mayor of Paris is too. So we’re going to do it.”

In the 12th arrondissement, the Roger Le-Gall swimming pool has nudist nights on Mondays, Tuesdays, and Wednesdays, but overcrowding has become a problem. Many members of the Nudist Association of Paris (yes, that is a thing), or the ANP, frequent the pool. In Paris, if one is nude in public, there is a fine of €15,000 or up to a year in prison.

There is speculation by ANP members that the new nude park will be somewhere off the beaten path in Paris, possibly a small garden or a spot in Bois de Vincennes.

Paris – though innovating in its own city with the idea – is not the first European city to have the concept. Munich, Barcelona, Berlin, and (somewhat surprisingly) even London, all have designated nude spots in their cities.

The French author (and later in life, Parisienne) Rachilde wrote in Monsieur Venus: A Materialist Novel: “The terrible poetry of human nudity, I understand it at last, I who tremble for the first time in trying to read it with blasé eyes.”

A nude park in Paris – even with the casual attitude towards nudity in France – will not be a blasé affair, in the opinion of this writer. There’s always a tingling of excitement that comes from the newness of things, and nude parks are no exception. 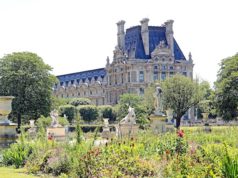 The Best Terraces in Paris: Our Experts Share Recommendations