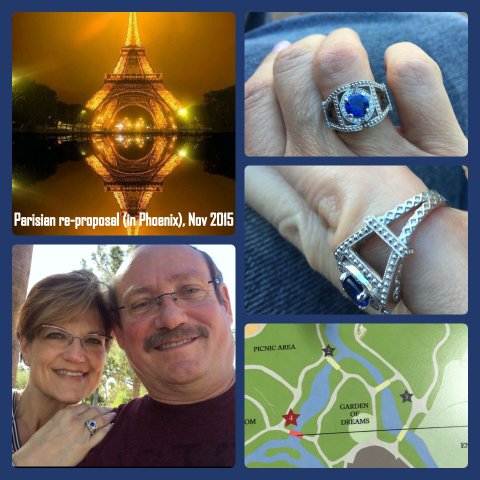 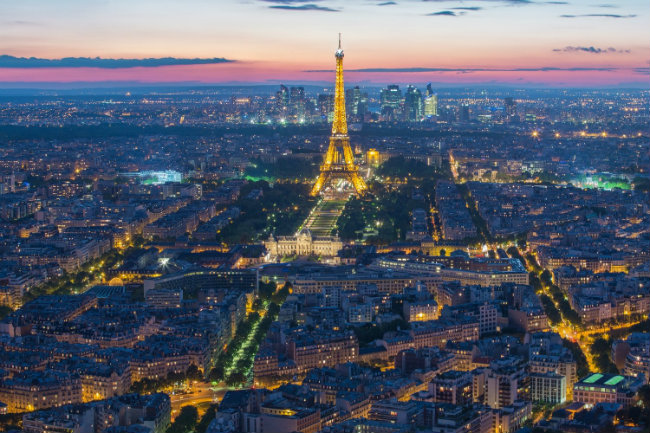 The Bonjour Paris editorial team recently requested reader submissions with memories from first trips to Paris. We were overwhelmed with wonderful responses, which we are publishing in a special series. (Read other installments here.) Below, Lori Lamb recalls the romance of “going to Paris for dinner”… from Phoenix, Arizona. 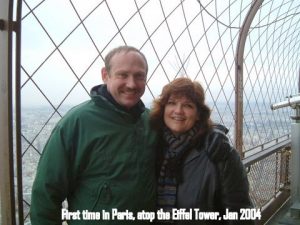 Lori and Keith at the Eiffel Tower

It was January 2004 and I’d just lost my job. I was completely devastated. My then-boyfriend, a 777 pilot for Continental Airlines (now United Airlines), decided to cheer me up by taking me with him on a Paris layover. Keith was secretly overjoyed as he had wanted me to be able to go with him on his work trips. Something I certainly couldn’t do working 60 to 70 hours a week! (Back story: when we first met in summer 2002 via the dating website Match.com, I was a 45-year-old (never married) career woman working with airlines and crew members, and committed to never dating an airline pilot! That rule went out the window after our first date to a local coffee shop where we couldn’t stop talking…)

A die hard romantic, I had always wanted to visit Paris with someone I loved, and be kissed beneath the Eiffel Tower. Keith knew that this experience was on my bucket list. “Pack a light bag and grab your passport,” he said, “we’re going to Paris for dinner!” 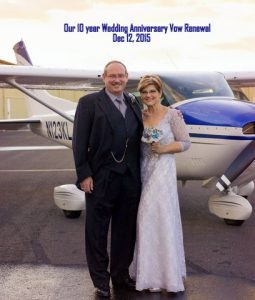 Twenty-four hours later I was in Paris, watching the glittering lights of the Eiffel Tower with tears of pure joy running down my face. The airline’s crew hotel was a block from the Eiffel Tower, and from our room, we had an amazing view of the Iron Lady. Keith and I spent the entire day walking all over the city, and despite the biting cold wind of that January day, we took the elevator to the top of the tower and gazed out on the city I’d only dreamed of visiting.

Later that night back in our room snacking on a baguette and cheese (Brillat-Savarin, a delicious story for another time), Keith called me suddenly to our window. In the distance, the Eiffel Tower twinkled in the winter night- just magical.

I’ve loved Paris for as long as I can remember, and we’ve returned many times, creating wonderful new memories each trip. But nothing can replace the joy I feel every time I think back to my first visit in January 2004.

Cut to November 2015, Keith marked our 10-year anniversary by re-proposing to me with a ring he had designed. We’d planned to spend Christmas in Paris, but life got in the way. Since he couldn’t take me to Paris, he brought Paris to me!

He “proposed” with a gorgeous ring modeled after the Eiffel Tower, with a beautiful blue sapphire and glittering white diamonds on top. I wonder if he thought that might stop me collecting Eiffel Towers? Not a chance in France!  We renewed our wedding vows, celebrating 10 years of marriage, on Dec 12th last year.

I love Paris … almost as much as I love this man!