The Story of Paris’ Wallace Fountains 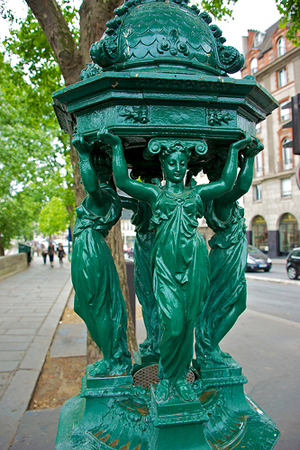 Wallace Fountains: the name given to the forest green water points found in most squares in Paris. Despite being an iconic part of the Parisian cityscape and something we most probably pass everyday, few stop to think why and how they came to be.

So, first a history lesson (cutting a long story short): The Franco-Prussian War was initiated in 1870 by Napoleon III and went very badly indeed for France.  Military losses were huge, food shortages became common place and the Prussian bombardment of Paris left the city structurally devastated. Socially the war led to widespread discontent of the city’s working and lower middle class who, after fighting to defend their city, felt the tier system become increasing polarized. This unrest culminated in the Commune episode of 1871 whereby for two months Paris existed as a city state under the governance of socialist and radical figures who emerged from these undercurrents of proletariat malcontent. After “The Bloody Week” of ruthless street fighting and later the execution and imprisonment of Commune collaborators, the movement fell and order was declared by the French army. Of course after all that violence, destruction and upheaval, order was far from ensured.

Various social and structural problems remained and from this sprung a new fashion amongst the Parisian bourgeoisie of philanthropy. One of said do-gooders was Sir Richard Wallace, an English art collector of inherited wealth. Wallace gained popularity amongst the people during the Prussian Siege of Paris when he donated huge amounts of money to fund things such as the commission of new ambulances. He continued these acts of charity after the conflict when the damage of many of the city’s aqueducts meant that the price of water, already expensive, rose considerably leaving many poor without adequate access to clean water. It was feared that problems such as this combined with low moral would lead many to alcoholism. In an attempt to prevent this, Wallace designed and funded some 50 fountains, providing all with access to free drinking water. From Wallace’s own initial sketches, sculptor Charles-Auguste Lebourg created the final design of four caryatids representing kindness, simplicity, charity and sobriety. Today the original Wallace-funded 50 has more than doubled, locations of which can be found here.