Paris Moments: Photo of the Month, View from Montmartre 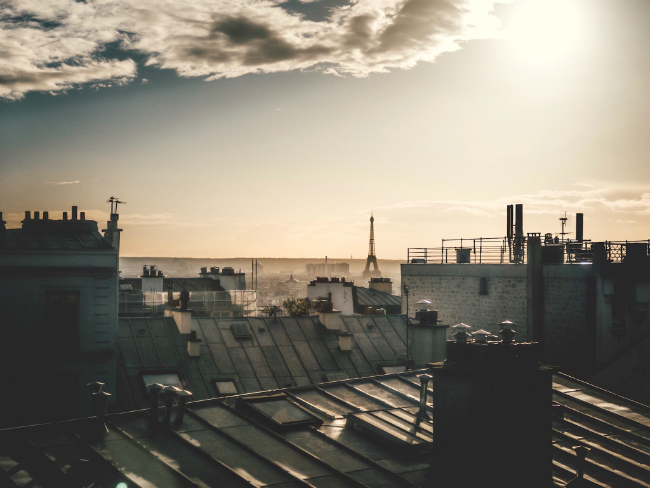 View from Montmartre by Corey Frye

Corey Frye, also known as “A French Frye in Paris,” spends much of his days pounding the cobblestones in Paris as he leads tours around the city. Along the way, he spots wonderful details, panoramas, cafés, and historic sites. These “Paris Moments” he will be sharing with Bonjour Paris readers in a new column featuring the Photo of the Month. (View past editions here.) Enjoy!

Renoir once said that were it not for the female breast he would have never become a painter. My guess is that he could have just as easily included “the light of Paris” in that sentence. Because he seemed equally obsessed with it.

And he wasn’t alone. Is it any wonder, gazing from Montmartre into that atmosphere, that so many of them fell silly in love? Is it a coincidence that in the 19th century every set of creative eyes that took in this view made the hill their home? Sure the cheap rents attracted the starving artist type, but I’m convinced it was that luscious luminescence (with or without Gustave’s tower) that made them stay.

And it wasn’t just the light and shadow and zinc and glazed terra cotta. Those are the obvious charms. It must have been the detachment as well; the sort of out-of-body experience of floating above the theater of Paris. The scientist looking down upon his specimen, so to speak. Montmartre will eternally feel removed from the “Paris” of Paris, and I can imagine that the bohemian life of yesteryear was one that slipped back and forth between frivolous partaker and withdrawn observer. In other words the perfect conditions for an artist.

There’s another reason I love this view: because for all that it brings visually, it’s as calm as if your eyes were closed. You won’t see cars or people or any recognizable signs of life. Just Paris in a petri dish, a gorgeous creature suspended in the amber for as long as you want to admire it. Perfect for a meditation on the city, on the qualities of light, or even on Renoir’s voluptuous mademoiselles. To each his own.