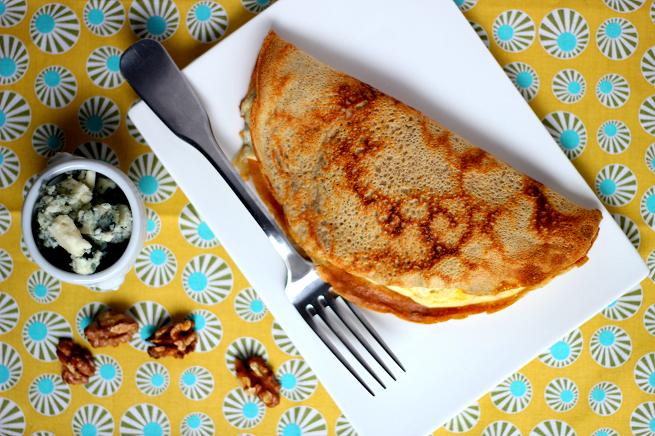 Even though the chandeleur, or Candlemas, is well past, French crêpes are delicious at any time of the year. What’s even better? Galettes, or buckwheat crêpes, a staple of any Parisian household with kids big or small. Buckwheat crêpes make a great lunch, filled with ham and cheese or quickly-sautéed mushrooms, or with any other filling you might have on hand. But for a slightly more soigné meal, did you know they can also be filled with a soufflé mix?

Soufflés seem really complicated, but they’re based on a few simple building blocks of French cuisine, the kind I taught teenagers when I when I worked in a tech school here in Paris for six years.

One of the building blocks is brown butter, which you’ll want to make for the crêpe batter. Another basic is Mornay sauce, which is a variation on the traditional white Béchamel sauce.

To get it right, I ended up making my students a little formula that looked something like this:

So this brings us to the whipped egg whites. Not hard to make, but you have to follow a few rules guidelines….

Soufflé-stuffed buckwheat crêpes with Roquefort and walnuts from Allison Zinder on Vimeo.

Soufflés aren’t really all that complex – they just need a bit of practice and patience. And you’ll be rewarded once you’ve learned the tour de main – trick of the hand. Read through the recipe ingredients and steps below, and then watch the video demonstrating how to make these the crêpes.

I like to serve these Soufflé-Stuffed Crêpes as a main course, with a great big green salad alongside.

For the buckwheat crêpes:

For the Mornay sauce:

about 1 cup (120g) Roquefort or other blue cheese, cut into dice-sized cubes or crumbled

1. Start by making the crêpe batter – it needs to rest for about an hour in the refrigerator. In a medium bowl, combine the flour and salt and whisk well. Make a well in the center of the flour, and pour into it the eggs. Whisk well, then pour in the milk and water. Whisk in a clockwise direction, starting in the middle and slowly bringing the flour into the liquids.

2. Once the mixture is smooth, make the brown butter, or beurre noisette. Cool it quickly by placing the saucepan into a cold water bath, and then pour the browned butter into the crêpe batter. Whisk until smooth.

3. Reserve in the refrigerator for at least an hour.

4. Now make the Mornay sauce: heat the butter over medium-low heat in a small saucepan until it foams, then add the flour all at once. Cook the roux for about 3-4 minutes, stirring often with a wooden or other spoon. Add the salt.

6. Bring to the boil again, whisking the whole time. The mixture should be smooth. Remove the saucepan from the heat and add the two egg yolks.

7. Whisk well, return the saucepan to the heat, and bring to the boil again. Boil while whisking for about two minutes, then remove from heat.

8. Preheat the oven to 300°F (150°C). Turn the Mornay sauce into a large bowl to cool on the counter (not in the fridge) while you’re preparing the rest, and cover with plastic film. The film should lie directly on the surface of the sauce to avoid it forming a skin.

9. Spread the walnuts onto a baking pan, and roast in the oven for about 15 minutes, stirring them around the pan once or twice during cooking. The walnuts will be a medium golden-brown and fill up your kitchen with a wonderful walnutty odor when they’re done. Let them cool for about 5 minutes in the pan, then turn onto a cutting board. Chop coarsely.

10. Make the crêpes: heat a scant teaspoon of the clarified butter or oil in a crêpe pan or non-stick pan over medium heat. Once the oil is hot, wipe the pan slightly with a folded paper towel. Ladle about a ⅓ cup of batter into the pan, swirling the batter around the pan to distribute it evenly. You want a very thin, almost lace-like crêpe so the soufflé can rise inside it later on.

11. Cook for about 3 minutes on one side, then turn the crêpe over and continue cooking on the other side, adjusting the heat as necessary. Don’t worry if this first crêpe doesn’t look quite right – the first one is always, always a throw-away!

12. Continue cooking in this way until you’ve used all the crêpe batter. Stack the crêpes on a plate as you go.

13. Now make the soufflé mix: in a very clean medium bowl, whip the egg whites (and the cream of tartar if using it) to stiff peaks: you should have a good “bird’s beak” like in the video.

14. Add a bit of the whipped egg whites to the egg yolks to “relax” the yolks. Then incorporate the yolk mixture back into the whipped whites, folding carefully with a rubber spatula.

16. In the same way you “relaxed” the yolks, add a bit of the whipped egg white mixture to the cooled Mornay sauce. Stir to combine.

17. Then fold in the rest of the whipped egg white mixture, adding in the crumbled Roquefort cheese and cooled walnuts.

18. In a large baking pan, fill the crêpes with the soufflé mix, and fold in half.

20. Serve immediately, and I mean right away! Whoever is eating should already be at the table when you put these in the oven, since they won’t wait. Bon app’!