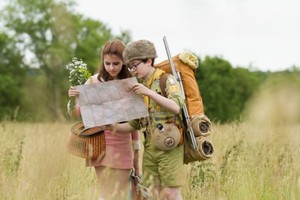 Wes Anderson has returned to our screens with his latest eccentricity “Moonrise Kingdom” vying for international glory in this year’s Cannes Film Festival. Awarded the honour of opening the 65th edition, high hopes have however been disappointed and Anderson has walked away empty-handed. French reception in particular has proved to be lukewarm, with some critics going so far as to say this opening privilege represented his only hope for recognition in the 2012 competition.

Set on an island off New England in 1965, the film follows the journey of 12-year-old outcasts Sam Shakusky and Suzy Bishop in their attempt to run away together and escape the clutches of adult authority. With a farcical troop of parents, boy scouts, island police and social services hot on their trail, the ill-fated pair find a dream-like seclusion at Moonrise Kingdom before a harsh return to reality. Full of references to Noah’s Ark and set in a violent storm, their romance is presented as a turbulent fantasy against fatalism and destiny, as a pair of the same ilk trying to escape the inevitable flood. Centring on childhood innocence, liberty, and doomed love, this proves to be one of Anderson’s most poignant explorations of human relationships to date. 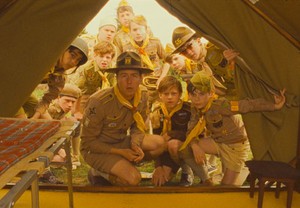 It seems that critics’ main problem is that Anderson lacks diversity in his productions and that he is guilty of having a style. While it is true that Moonrise Kingdom touches upon familiar themes of loneliness and dysfunctional family life, it is still able to craft a unique fantasy to surprise and entertain its audience. His very personal brand of humour, a mixture of deadpan and slapstick termed “mélancomique” by the French, is always applied in new and ridiculous situations, and is an interesting and unpretentious means of approaching emotion; underneath its veneer of an amusing childhood adventure this film considers serious and painful adult issues. His penchant for detail is again clearly displayed in this film, with the use of lateral and vertical camera work on the Bishop household’s layout being very reminiscent of Steve Zissou’s presentation of the Belafonte in “The Life Acquatic”. Certainly, pedantic quirkiness, charm, and an imaginative incorporation of music are to be found in abundance, but to reduce this ensemble to the empty adjective “pretty”, as one French critic has, seems to ignore the more subtle and tender points of the production.

Likewise, Anderson has chosen to work with past colleagues. Moonrise Kingdom marks his fourth collaboration with Roman Coppola and sixth with Bill Murray, and sufficient screen time is even set aside for a Jason Schwartzman appearance. Yet Anderson is able to balance old favourites with fresh talent, and Jared Gilman and Kara Hayward prove to be strong, convincing leads. Secondary performances from Edward Norton, Bruce Willis and Frances McDormand also suggest that the big names in this film play a complimentary rather than dominating role.  What’s more, anecdotes of Bill Murray teaching Gilman how to tie his scout necktie, and real-life mail correspondence between the two leads in preparation for the role, seem to confirm a dynamic and colourful on-screen relationship between this odd collection of actors.

In spite of some pronounced French criticism, there is reason to believe that Anderson has carved for himself a loyal, if modest, set of French followers. In keeping with Woody Allen’s “Midnight in Paris” which opened the festival last year, Moonrise Kingdom was released exclusively to French cinemas on the same day as its Cannes screening and sold an impressive 17,500 tickets on its first day. Anderson’s nod towards French culture in his choice of a Francois Hardy track for the soundtrack was particularly appreciated by French viewers, and his personal love for Paris is well-known to the French. Having visited the capital several times and penned scripts in Parisian cafes, Anderson hopes one day to shoot a film in Paris. Perhaps such a gesture of “franco-flattery” will sweeten the more vicious teeth among his set of French critics.

40 Years On, A Look Back at Palme d’Or Winner “Apocalypse...