Monsieur Mediocre: One American Learns the High Art of Being Everyday French is a delightful collection of essays describing the author’s life in France.

Married to a Frenchwoman he met when she was working as a waitress in a Brooklyn coffeehouse, John von Sothen has lived in Paris since 2002, where he and his wife have raised their two children.

Comparisons to Adam Gopnik’s Paris to the Moon are almost inevitable. I love both books, and there are many similarities: North American dad raises his young children in Paris, expresses both deep admiration and occasionally deep frustration with the French and French ways. Both have a great sense of humor and write well. Von Sothen is a tad more irreverent than Gopnik, to the point that occasionally as I was reading I feared (thinking, no doubt, like a typical American) that his candor about some of his true-life experiences in France might lose him friends: but if he isn’t worried about that, I guess I shouldn’t be either. (A disclaimer on the copyright page qualmed my fears: “All names and identifying characteristics have been changed to protect the privacy of the individuals involved,” it says. So, okay, good. And phew.)

The book begins with a lovely tribute to the author’s mother, in a chapter titled “The Art of the Unfortunate Event.” It was she who first introduced him, as a young boy, to her fascination with and love for France, by telling him stories of the Paris she knew as a young woman studying there. His description of her and of her highly creative, eccentric approach to life is simply beautiful. No mother could hope for a more loving portrait, even though he does admit (affectionately) that she was “not a very good cook.” (Have you ever heard of someone roasting a turkey under the hood of a moving car? See what I mean about creative and eccentric?)

The essays are thematic, and through them we learn a great deal about French parenting, French schools, French vacations, French politics, etc. all as seen through von Sothen’s own unique, uninhibited, down-to-earth, quintessentially American (and often very funny) lens.

One of my favorite chapters, in which he discusses his uneven path toward fluency in French–certainly not bilingualism, he points out, whatever his American friends may think—is called “Wesh We Can,” a bicultural reference both to Barack Obama’s presidential campaign, and to the word wesh which is, according to von Sothen, “the most emblematic expression of urban French.”

Here’s a tidbit from that chapter:

I never wanted to admit I didn’t understand. I never asked people to repeat themselves or to just slow down. Instead, I developed an impressive tic of laughing on cue or dropping throwaway expressions, such as “Ah, bon?” (really?) or “dis donc” (well, then) or “vraiment?” (you’re kidding me), which gave people the impression I understood (which I didn’t). They’d buy into my sham…And each time, without fail, there’d be that invariable fork in the road…The person might be describing something hideously boring, like the French thirty-five-hour work week, staring with “Une fois, il y a eu un type de bureau” (Once there was a guy from the office), but I’d forget the word type in this instance didn’t mean kind. It meant guy. And because of this, I assumed he was describing a type of office, not a guy from the office. The conversation soldiered on, my friend telling this type de bureau was being liquidé meaning fired (liquidated), me off the reservation imagining a type of office being cleaned. When he told me his union was going to fight it, I responded in turn, “Yeah, if anything, just ask them to clean it over the weekend.”…It wasn’t until I’d reached the bottom of the staircase post-party that I’d realize why his confused face had flashed pity. By then it was too late to clear things up…

Let me just say that any foreigner who lives in France and whose French is less than perfect (which is pretty much all of us) has been in similar situations. Many times.

Because the work is written in a comic vein, there is certainly overstatement here and there. So, for example, anyone who may be planning to visit Paris in August should not be dismayed at the author’s pronouncement that being in Paris in August is so bad that  “you die a bit inside.” (It’s a joke!—well, kind of…)

But he can also be quite serious, and thoughtful, when he is writing about matters such as cultural and ethnic diversity in France—especially when describing his own neighborhood in the 10th arrondissement of Paris.

Sometimes I wonder if the French response to wesh that I sometimes see comes down to our complicated feelings about culture, class, and race. Maybe there is a parallel between the way France won’t allow itself to appreciate the…richness the country has to offer and the way it sometimes undervalues the vital contributions millions of immigrants living here have made.

The chapters in which he writes about the final illness and death of his parents in Washington D.C. are also very poignant. Anyone who has ever struggled to care for aging parents while living far away from them will be moved. I myself was moved nearly to tears.

Toward the end of the book, in this succinct (and quite accurate) summary of what it is like to be an expatriate he also credits his parents with having prepared him for life as a “stranger in a strange land.”

I realize now, the life of an étranger is much like being the only child of older parents who hold tons of cocktail parties. You’re embarrassed for being there and it’s obvious you stand out. You’re treated (often) like a child. You don’t know the formal codes and you’re learning on the fly. Since you assume people are feigning interest in you, you pick up tics and quick-witted dodges to make yourself more endearing or to better hide your deficiencies. And in the end you go to your room exhausted, not really sure if you had a good time, not really sure why you were there in the first place, but content nonetheless…This feeling of being on the periphery drives many people nuts. Most need to be sure they understand everything or know everyone there or at least grasp why it is they’ve been invited. Anything outside that realm can seem spooky. Not for me. Talking about stuff I didn’t understand, navigating weird rules, feeling alone but safe, the daily life of an expat basically, never seemed too daunting for me. It was home, actually, something I’d been born for.

Those who are already living an expatriate life will surely identify with many of von Sothen’s experiences and appreciate both his sense of humor and his insights into life in France. Those who are considering submitting themselves to the challenge may not believe everything he says about just how awkward it all can be, while still being pretty wonderful.

Purchase this book at your local independent bookstore (in Paris, we recommend The Red Wheelbarrow, San Francisco Books, Shakespeare and Company), or on Amazon below: 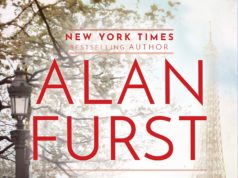