The Paris Morgue: A Gruesome Tourist Attraction in the 19th Century 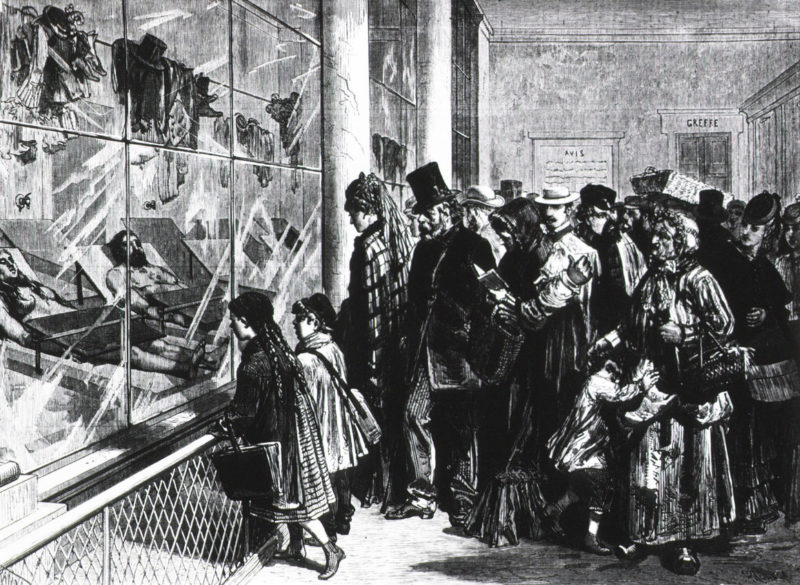 At the very edge of Île de la Cité on the quai de l’Archevêché, gazed down on benevolently by Notre-Dame Cathedral, lies the square de l’Île-de-France. It is a peaceful spot in the midst of the hurly burly of Paris and the constant traffic of the Seine.

It requires more than a little imagination, therefore, to discover that in this very square the Paris Morgue was one of the most popular tourist attractions in Paris in the 19th century. The Paris Morgue had been on Île de la Cité since 1804, but the move to the very edge of the Seine in 1864 had been effected for practical reasons; it was bigger, more modern and, more importantly, perfectly positioned for fishing corpses out of the Seine.

Corpses picked from the river or off the streets were often almost impossible to identify and so the public were allowed into the morgue in the hopes that a body would be recognized and claimed. What is doubtful is that the authorities ever imagined that the sight of dead bodies would so capture the imagination of the public. With no interest in identifying a loved one, they were instead drawn to the macabre and gruesome sight of the corpses on display.

The bodies were displayed behind glass on marble, tilted slabs. Before they were displayed, the bodies were stripped, inspected and frozen. Before 1882, iced water dripped down on the bodies but later a refrigeration system kept the bodies cold. The bodies were kept on display for three days after which a photograph or wax cast would be taken. The deceased’s clothes were hung next to their bodies. A pair of green curtains was hung on either side of the glass displaying two rows of corpses, prompting comparisons to the theatre; Emile Zola, a frequent visitor, named it the ‘show that was affordable to all.’ Zola used the Paris Morgue as an inspiration, particularly in ‘Thérèse Raquin‘ where her husband’s killer visited the morgue every day hoping to see the body of his victim. 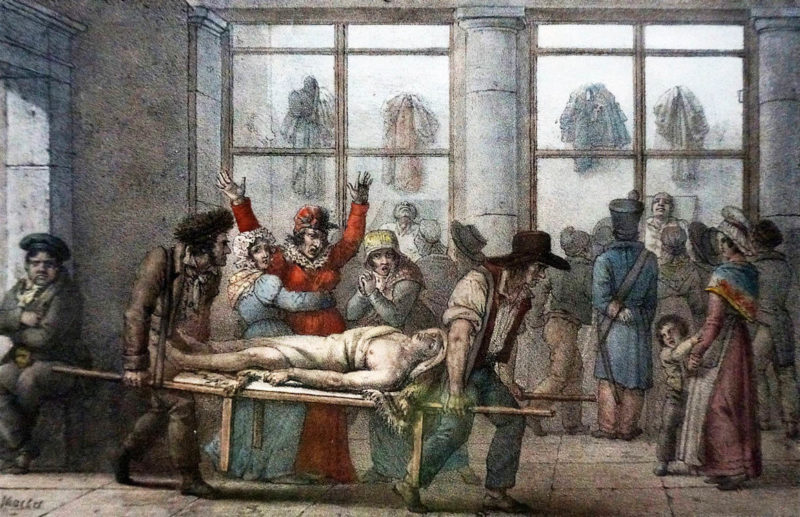 The Paris newspapers at the time inflamed the interest of the public by printing sensational stories of the victims. After one such publication in 1886 of a four year old girl found dead with a mysterious bruise on her hand, the crowd outside the Paris Morgue was so huge it stopped the traffic. The doors of the morgue were besieged by the angry mob, jostling to get in to see the tiny four year old in her little dress. She became known as the Enfant de la Rue du Vert-Bois and was seen by over 150,000 people.

By now the Paris Morgue was an established tourist destination featured in guide books which even included the guide book of the respected, but recently ill fated, Thomas Cook Company.

The Paris Morgue was open seven days a week from dawn to 6pm and was drawing up to 40,000 visitors a day. Parisians and tourists mingled side by side. It became a family day out at weekends, the respectable mixing with the disreputable, young and old, male and female, small children and workers on their lunch break; all filed past the bodies with unabated curiosity.

The more horrendous or gruesome a death, the longer the queues grew. Decapitated, or limbless bodies, tiny children, only added to the morbid desire to see the bodies up close.

Of course what was undeniably adding to the dubious attraction of seeing dead bodies on display was that it was free to enter. 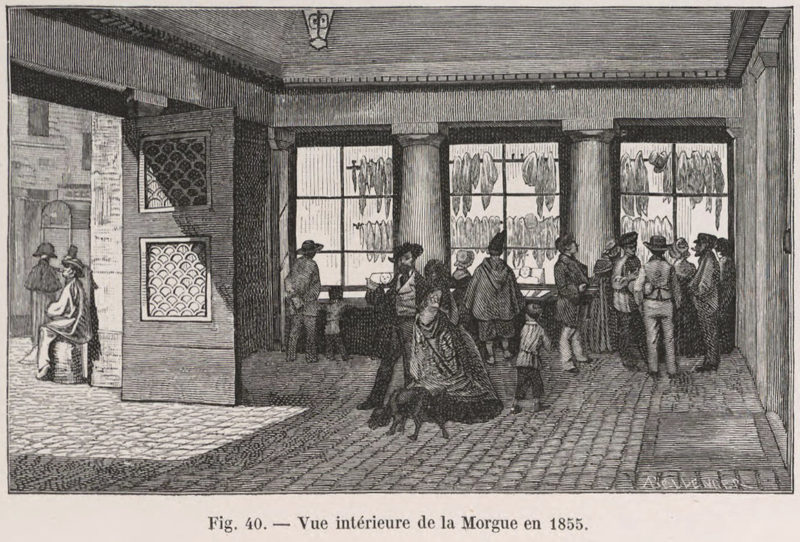 A glimpse of the Paris Morgue’s interior. The left wall of the entrance hall consisted of a row of windows through which guests could see the “salle d’exposition” where cadavers were laid out on iron tables, their clothes hung from thick iron hooks over their heads. Image © Wikimedia. Public domain.

Indeed if on a rare day, the morgue was empty of bodies, the dissatisfaction of the crowd was made apparent. Their appetite for death up close had become almost insatiable.

Because of the guarantee of daily crowds, street vendors set up outside the morgue selling oranges, coconut ice or whatever else they thought would tempt the queue.

Paris police, in the hope that seeing their victims might result in a confession, often brought suspected murderers to view their handiwork. Bright lights were installed to illuminate the corpses in the thinking that this might aid an admission of guilt. It appears that this tactic actually got some results and face to face, as it were, with their victim, murderers who had not confessed in the police station, now owned up.

It seems that the public at that time were unshockable, greedy for more and more death to satisfy their appetite for viewing corpses of the macabre or the downright pitiful.

When in 1895, both an 18 month child and a three year old were pulled out of the Seine within days of each other, the crowds trying to get into the morgue were so great and unruly, the police were called. Inside the viewing was even more chaotic. Men pushing and shoving for the best position, young women looking on in pity, but worse still, perhaps were tiny children held aloft to gain a better view by parents.

The most notorious corpse though, was with doubt, the young woman, known as L’inconnue de la Seine.

The young woman who had not been in the river long enough to destroy her looks, had committed suicide. Her peaceful and enigmatic expression so reminded the morgue attendant of the Mona Lisa, that a wax plaster cast was immediately taken of her face. (Later theories discounted the claim that the mask was taken from a dead woman…) From the firmness of her skin, it was estimated that the girl was around 16 years old. Her origins were never discovered, she remained unidentified, although theories of her birth place abounded: from Germany, Russia and even England. Photographs were taken of the mask and fueled the public interest to fever pitch. Copies of the mask were often found on artists walls, intrigued by her beauty. Her fame spread to the U.S.A. where the mask was renamed ‘La Belle Italienne.’ In later years, her fame did not diminish, and even more bizarrely on current websites today, posters, plaster casts and T shirts of L’inconnue de la Seine are on sale.

While there were concerns voiced about the risk to ‘moral hygiene’ of this unabated voyeurism, particularly concerning young women viewing near naked male bodies and children being exposed to the undoubted horrors of the morgue, there was little real moral outrage at the time and visitors continued pouring into the Paris Morgue until 1907 when the authorities finally closed its doors for the last time.

On the exact spot of the Paris Morgue a memorial to the WWII Nazi deportation stands.
Access to the garden is found at 1, quai de l’Archevêché. A place now for reflection of two eras, both steeped in both horror and sadness. 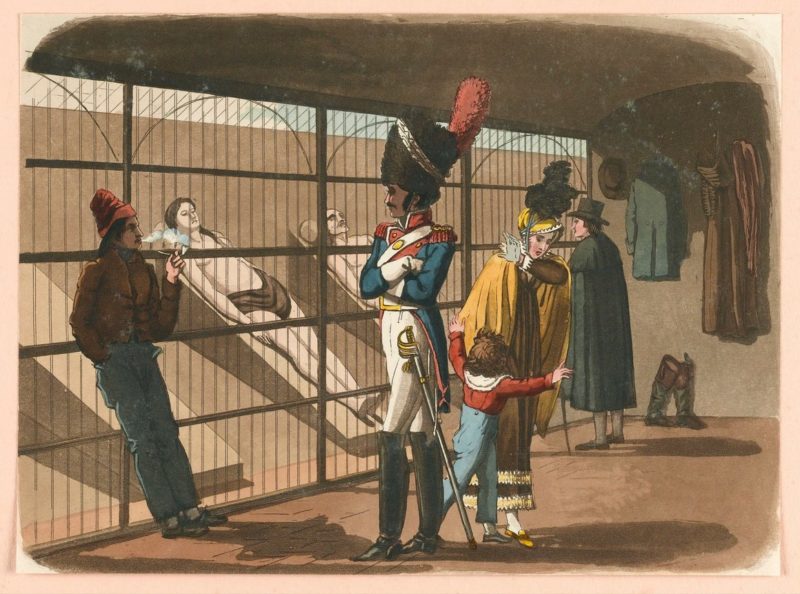 People visiting the morgue in Paris to view the cadavers. Coloured aquatint by R.B. Peake, 1816. Image © Wellcome Collection. CC BY 4.0

The Truth Behind the Paris Opera Captured by Degas