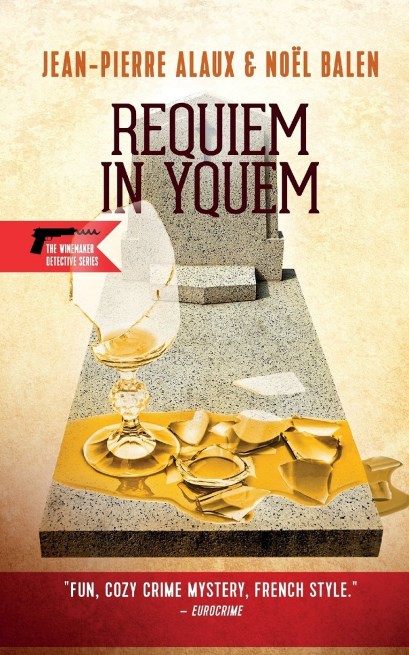 I don’t know whether to be dismayed that it’s only now I’ve discovered the Winemaker Detective series, or happy that it’s finally happened.

But since I like to focus on the positive, let me just say what a delight it is to have discovered this mystery series, written by two Frenchmen, Noël Balen and Jean-Pierre Alaux.

The 13th book in the series, Requiem in Yquem, which has been translated into English by Sally Pane, will be released on September 12. That means there are 12 more mysteries I can put on my reading list for whenever I feel like reading a good whodunit set in France—with the additional pleasure of learning more about wine, and about France, as I do so.

Though centred in Bordeaux—because that is where the mystery-solving duo, Benjamin Cooker, professional oenologist and amateur sleuth, and his assistant, Virgile, live and work—this series takes readers to other parts of France as well: in fact, to wherever fine French wine is made, consumed, or sold. This volume is set mainly in the Sauternais region, but it includes side trips to Paris and London, and to the Lot as well.

The translation reads smoothly and pleasurably, which for me means that it meets the most important test of literary translation. Most impressive of all to me were some of the delightful descriptions of food and wine. For example, here is a description of Yquem, the sweet dessert wine of the title:

As he tasted, Benjamin discerned the sweet wine’s aromas and mused on his hosts’ observations. First, there were the vegetal fragrances of linden, verbena, mint, green tea, hawthorn, and forest honey. But soon the fruit scents—citrus, apricot, quince, and Zante current—took over. Benjamin also detected floral fragrances of old roses, acacia, and honeysuckle…[and] he further noted sweet spices, including paprika, and cumin.

Wow! I must confess, my palate has never been, and I am sure never will be, discerning enough to detect all that in even the finest wine (not that I have a whole lot of opportunity to drink really fine wines). But I admire those who are so discerning, and I know good, evocative writing when I read it.

Also very satisfying are the peeks into the painstaking art and science of winemaking. And although the oenological star of this volume in the series is Yquem, a Sauternes, Cahors wines get more than one respectful nod as well. Here’s one example:

Jeremy demonstrated how he punched down the wine, a common practice in the Bordeaux region. It involved breaking up the solid mass of skins, stems, and seeds that floated to the top of the vessel during fermentation and pushing them down again. It was an unconventional method in this corner of the Lot Valley. Virgile, however, supported the practice, as it had a clear impact on a wine’s quality… 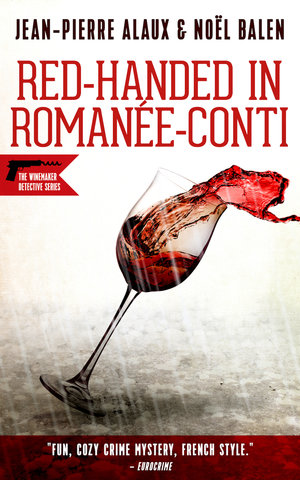 Another instalment in the Winemaker series

Not surprising, given that these are books written in French for a French audience, is the number of intellectually satisfying conversations and musings, and also the literary allusions that are sprinkled throughout. For example, Virgile is named for none other than the author of the Aeneid, and the names of Jean Giraudoux, Oscar Wilde, and John Keats are also dropped in to pleasing effect during the course of the story.

The press release announcing the book says that Requiem in Yquem offers “a relaxing journey through French wine country peppered with reflections on greed, remorse, and friendship.” I would have to agree. I never really understood quite as well what was meant by a “cozy mystery” until I reached the end of this book: the murderers have been apprehended, justice has been served, and life goes on in a way that leaves plenty of room for the characters to engage in interesting philosophical ruminations about life, love, and joie de vivre. And in this case, to enjoy the plaisir inherent in fine dining. It is oh-so-French, and as I came to the end of the story, I felt indeed very cozy.

It’s also nice to know that those who have access to it can watch a television series—Le Sang de la Vigne (Blood of the Vine)—which is apparently very popular in France, Switzerland, and Belgium. I intend to look for it.

Previous Article A Taste of Paris: Interview with American Author David Downie
Next Article The Perfect Paris Wine Heist? Courtesy of the Catacombs