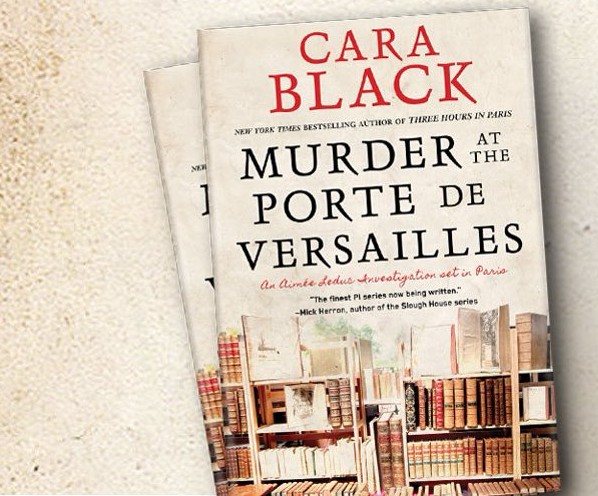 Is it the carefully researched details? The Parisian setting? The fashionable, tech-savvy heroine? The thrilling, fast-paced chase scenes and plot? Fans of the Aimée Leduc mystery series can’t always pinpoint the exact reason that author Cara Black’s novels are so addictive. Really, it’s the melange of all these elements that has created a loyal fan base, starting back in 1999 with the release of Murder in the Marais. Over the years, Black’s Francophile fans have followed her daring detective to different arrondissements, as Leduc tracks down killers and sleuths out complicated enigmas, while at the same time immersing themselves in a distinct neighborhood setting.

The latest to hit the shelves is Murder at the Porte de Versailles, released this spring as the 20th novel in the series. Set in the 15th arrondissement, the tale takes us back to November 2001, with Leduc thrown into a dangerous web of terrorist threats and international spycraft. Here’s the official book synopsis:

“In the wake of 9/11, Paris is living in a state of fear, with constant bomb alerts and heightened ethnic tension. For Aimée Leduc, November is bittersweet: the anniversary of her father’s death and her daughter’s third birthday fall on the same day. A gathering for family and friends is disrupted when a bomb goes off at the police laboratory—and Boris Viard, the partner of Aimée’s friend Michou, is found unconscious at the scene of the crime with traces of explosive under his fingernails.

Aimée doesn’t believe Boris set the bomb. In an effort to prove him not guilty, she battles the police and his own lab colleagues, collecting conflicting eyewitness reports. When a member of the French secret service drafts Aimée to help investigate possible links to an Iranian Revolutionary guard and fugitive radicals who bombed Interpol in the 1980s, Aimée uncovers ties to a cold case of her father’s. As Aimée scours the streets of Téhéran-sur-Seine trying to learn the truth, she has to ask herself if she should succumb to pressure from Chloe’s biological father and move them out to his farm in Brittany.”

Gripping, right? We’ll avoid sharing any spoilers, but know this: the cliffhanger at the end will have you desperate for Black to finish the 21st installment. The one she’s currently researching, which will be set in the 19th arrondissement — the only neighborhood she hasn’t yet covered.

We recently had the pleasure of catching up with Black while she was in Paris on a research trip. Like Aimée Leduc, Black likes espresso, and our local café was happy to oblige. Also like her heroine, Black does extensive fieldwork — she walks and takes notes and arranges meetings with as many people as possible. Her research is exhaustive and intense — diving into library archives, reading Le Parisien, interviewing local flics, crime lab technicians, forensics specialists, and neighborhood residents — but there’s also a serendipitous component to her work. That portable refrigeration unit that plays a key role in the book’s plot? She actually saw it outside the lab in the 15th…

Not only is Black a story collector, but she also weaves a rich tapestry of a place. In Murder at the Porte de Versailles, Black describes La Ruche, the historical artists’ residence that’s literally translated as “the beehive”; the Musée Bourdelle, the atelier where the 19th-century sculptor resided and worked “in a quiet warren of crooked streets alongside the Montparnasse station”; the Petite Ceinture and the Parc Georges Brassens; the bookstore on rue du Commerce; even the local horse butcher is a real address.

One of the most surprising details that Black shared? She doesn’t outline her books in advance! Pretty remarkable, considering the addictive pacing with alternating action scenes…

A review in the Washington Post says this mystery novel will “feed your fantasy” if you’re dreaming of France. Murder at the Porte de Versailles “should come with wine and cheese.” Or how about a croissant and espresso? We couldn’t agree more.

You can buy Murder at the Porte de Versailles at your favorite independent bookstore (like the newly expanded Red Wheelbarrow in Paris) or order online from bookshop.org or Amazon.