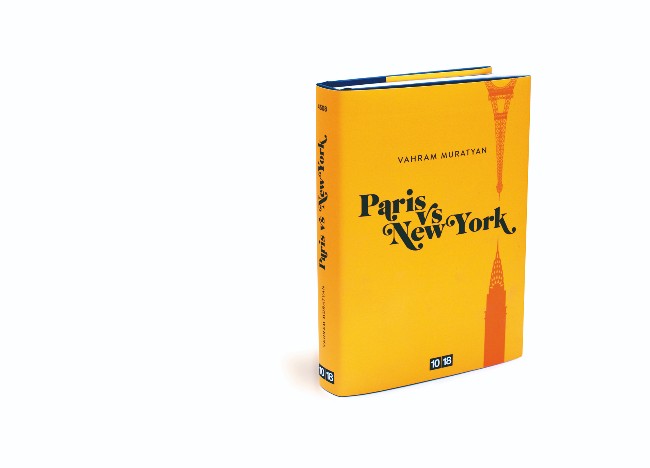 It’s an age-old rivalry: Paris versus New York. Which is the superior city? As someone who has lived in both places, I believe them to be incomparable cities, by and large. It’s like comparing an apple to an orange. Or should I say it’s like comparing an apple to a croissant? Overall, it’s a mismatched comparison because both cities are unrivaled and without an equal.

Sure, both have the big city vibe and remain the financial centers of their respective countries, as well as the nucleus of American and French culture, art, and more. And it was these similarities that led creator Vahram Muratyan to create his iconic Paris Versus New York book 10 years ago.

A post shared by ya da creative agency (@yada.creativeagency)

Muratyan is a French art director and visual storyteller. Inspired by a long trip to New York in 2010, the art director began his blog, “Paris versus New York, a tally of two cities.” The blog was a certifiable hit and attracted millions of visitors online.

Muratyan also showed the design series in person at The Standard in New York, and at Colette in Paris. When the book – inspired by the popular blog – was published in 2012, it was an international bestseller. This year, the author’s book about Japan, Va Au Japon, turns his lens on Japanese culture in a “playful visual travelogue.”

So, what was all the fuss about with the Paris Versus New York book? And why does it remain so popular? The New York Times gave the book a sparkling review, saying, “In his witty, high-concept, high-colored flipbook, Mr. Muratyan’s thesis emerges playfully on every page: Vive la différence!”

Here are the three reasons I believe Paris Versus New York was a huge international bestseller and continues to stand the test of time – even a decade after its publication.

Flip through this book’s pages and you’ll be greeted by an explosion of color and fun. The playful pages feature designs of scenes in New York and Paris. As well as notable New Yorkers and Parisians, like French fashion designer Sonia Rykiel.

Somehow, Muratyan makes even the mundane – like a subway or metro commute – exciting and electric. And he incorporated iconic Paris and New York locations, like the Centre Pompidou and the Guggenheim Museum.

The prints can be found outside of the book’s pages, too. Like this print, which playfully illustrates similar hairstyles and looks found in the Big Apple and the City of Light, but which go by different monikers (“hipster” and “bobo”).

Beautiful Paris and New York City coffee table books with gorgeous, glossy pictures are, frankly, a dime a dozen. But Muratyan’s unique and stylistic approach to comparing these two cities has his mark on each design. It’s easy to tell it’s his, and the unique-ness of his work played into making this book such a success.

For as fun and unique as it is, the book presents a simple concept, too. It’s fun and eye-catching art created in a comparative way. Muratyan’s website describes the book: “A friendly visual match between two cities told by a lover of Paris wandering through NewYork. Details, clichés, contradictions: This way, please.”

Fans love the book, too. Its simple, unique, colorful, and playful images continue to resonate with readers all over the world. And you’ll find many people on social media declaring which page is their favorite one from the book. (Personally, my favorite is the print featuring Carrie Bradshaw and Amélie Poulain – two iconic and delightful “city girls” on one page!)

Previous Article Le Mikado: The Legendary Night Club Returns to Pigalle
Next Article In Celebration of Women: A New Type of Walking Tour in Paris