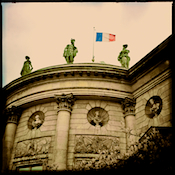 Most people entering Le Musée d’Orsay pass the adjacent Musée national de la Légion d’honneur (National Museum of the Legion of Honor) without noticing. What a shame; the museum’s permanent collection is worth a visit anytime but a temporary exhibition going on now makes this unnoticed gem a destination. 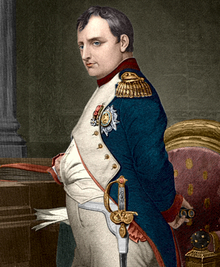 The 150-piece ensemble, one of the rarest in the world, includes crown jewels, armor, Legion of Honor decorations and medallions owned by Napoléon III (nephew of Napoléon I) and his son, Prince Imperial Louis-Napoléon. Period clothing, battle paintings and other historical articles illustrate Napoléon I’s vision, ascent to the throne and his lasting import role in French history.

Emperor Napoléon I (Napoléon Bonaparte) created the Legion of Honor award in 1802 modeled on principles established by the Orders of Knighthood in the Middle Ages.

The French government has owned most of the Napoléon III treasures since the royal family donated them in the late 1970s. Other articles are owned by The Napoléon Foundation and the National Museum of the Legion of Honor. 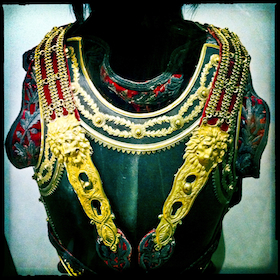 The permanent collection of the National Museum of the Legion of Honor includes decorations and medallions awarded to military officers and civilians from France and other countries, hundreds of paintings displayed in a portrait room and ephemera dating back to the Middle Ages. The museum explains protocol that dictates how, where and when badges, ribbons and medallions shaped as fleurs-de-lys, rosettes, stars, crosses and other medallions are worn. Only the president is permitted to wear the Royal Collar and, in fact, it is a crime in France for anyone other than the owner to wear any of these decorations. Particularly stunning among the priceless gems is the Grand Collar of the Legion of Honor with Napoléon I’s crest.

The award remains today France’s most important national decoration. It is awarded to individuals who demonstrate outstanding merit, no matter their nationality, social or economic class in reflection of France’s motto liberté, égalité, fraternité. Merit is defined as acts of heroism, generosity or accomplishments in the arts and sciences or other activities deemed important, such as gold medal winners from international Olympic Games competitions. Every president of France serves as the Grand Master of the Order and he is above members ranked (from top to bottom) Grand Officers, Commanders, Officers and Knights. Foreigners installed as Knights include Americans Miles Davis, jazz musician, and novelist Toni Morrison. British winners include writers Nancy Mitford and JK Rowling.

“Imperial Diplomatic Splendors from the Second Empire” is one of the most ornate displays in all of Europe. The temporary exhibition is free and open to the public until May 29, 2011.

As a child, Kirsten Alana listened quietly as her artist mother and Francophile godmother spoke French. Mesmerized by the musicality of the language, she was destined to share their love for the City of Light. A photographer by trade, Kirsten spends her spare moments perfecting her French accent and planning future travel. Her destiny will be fulfilled when she moves to her own Saint-Germain-des-Prés pied-à-terre. View Kirsten Alana Photography online.