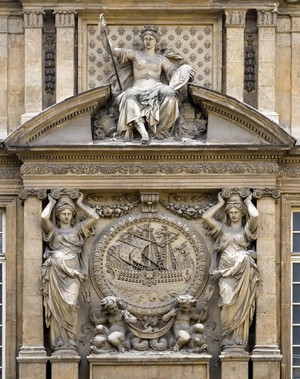 Ah, Paris – so many museums, so little time! At last count, the City of Light boasts between 150 and 200. Given that so many deserve repeat visits, one could be occupied for years. Not to mention that, notwithstanding the undisputed merits of their collections, the buildings themselves have stories to tell.

Such is certainly the case of the Musée Carnavalet, two hôtels particuliers, now joined by a gallery, that house a museum dedicated to the history of the city of Paris. The first of the two, the Hotel Carnavalet, is a rare example of Renaissance-era residential architecture found in Paris, although the building has been significantly modified over time.

The original architecture is attributed to Pierre Lescot, and the ornamental sculptures to Jean Goujon. The attribution is plausible, as the two had earlier collaborated on the Lescot wing of the Louvre (the western portion of the Cour Carrée). The entry portal features a sumptuous accumulation of allegorical elements in high relief – characteristic of French Renaissance décor – while the courtyard façade is adorned with sculptures of figures representing the Four Seasons, each crowned with its corresponding astrological sign (Aries for spring, Cancer for summer, Libra and Capricorn).

The hôtel was built between 1548 and 1560 for Jacques Ligneris, president of the Parliament of Paris, and passed through a succession of wealthy owners. It takes its name from one of them, the widow Kernevenoy (Carnavalet is a corruption of her name).

In 1655, a new owner engaged the renowned architect François Mansart. M. Boislève apparently possessed the attributes necessary to a client of Mansart: wealth and patience. The architect was a perfectionist, known to tear down a building if he was unsatisfied, only to recommence construction. (One masterpiece, the Château des Maisons-Lafitte, took 21 years to complete.) Through extensive renovations under Mansart’s direction, the hôtel lost much of its Renaissance spirit. However, the Flemish sculptor Gérard van Obstal added ornamental sculptures, representing the virtues and the four elements, to harmonize with the existing Four Seasons. Antoine Coysevox’s magnificent statue of Louis XIV dominates the courtyard. 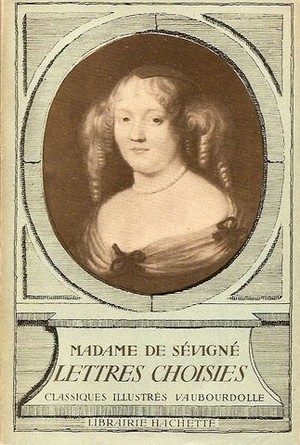 Perhaps the most famous resident of the Hôtel Carnavalet was Madame de Sévigné, celebrated for her beauty, wit and vivacity, and a welcome addition to any soirée. She was widowed at a young age and never remarried, devoted to her children. Her letters, notably those to her daughter, span more 30 years and provide a window on 17th-century French society and the manners of the time. Madame de Sévigné was a frequent guest at Vaux-le-Vicomte and fervently defended her friend, Nicolas Fouquet, when Louis XIV got himself in a snit because Fouquet lived in a finer house than his king. She lived in the Hôtel Carnavalet from 1677 until her death in 1696.

The Hôtel Carnavalet remained in private hands until the end of the Ancien Regime. In the 19th century, it became a museum by order of Baron Haussman. Eventually, it outgrew its space, and so the Hôtel Le Peletier de Saint-Fargeau was annexed. The hôtel has retained little of its original interior decoration, with the exception of the chamber of mirrors and the grand staircase. Its cast iron bannister, dating from the late 17th century, represents one of the first uses of that material on a grand scale. The history of the place makes up in drama what it lacks in architectural interest. 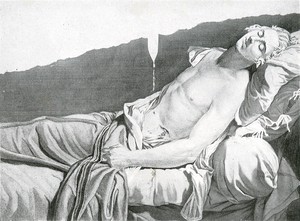 Built for Michel Le Peletier de Souzy, it was occupied by his descendants, the last and most famous of whom was his great-grandson. Michel Le Peletier, marquis de Saint-Fargeau. was of noble birth, but his views became more and more radical, and his pursuit of social reforms, notably in education, made him a popular member of the Estates-General. Elected deputy to the Convention from the department of the Yonne, Le Peletier is rumored to have cast the deciding vote for the death of Louis XVI (the vote carried, 361 to 360).

That same evening, Le Peletier dined with friends in a restaurant at Palais Royal. A former bodyguard of the King was there, as well. Seeking to avenge his royal master, he approached Le Peletier and ran him through with a saber. Gravely injured, the victim was taken to his home, where he died the following morning. A few hours later, the King he had condemned was executed by guillotine.

His funeral was choreographed by none other than Jacques-Louis David, never one to resist an opportunity to promote his revolutionary ideals. The body, resting on a neoclassical catafalque, lay in state for several days at the Place Vendôme before being transferred to the Panthéon. Le Peletier was proclaimed a martyr of the Revolution, and his 11-year-old daughter, Suzanne Louise, was officially adopted by the French nation, a “daughter of the State.”

David’s depiction of Le Peletier on his deathbed was the first official painting of the Revolution and is considered preparatory to the more famous Death of Marat. All that remains of the painting today is an engraving by a student of David. The original was destroyed by Suzanne Le Peletier. History is nothing if not ironic: the daughter of the State was a Royalist.

The Hôtel Carnavalet is located at 23, rue de Sévigné, and the Hôtel Le Peletier de Saint-Fargeau at 29, rue de Sévigné (3rd arrondissement). Information about the Musée Carnavalet may be found on their website.

Jane del Monte lived for a number of years in Paris. She operates ARTS in PARIS tours, with a focus on French culture and l’art de vivre. When she’s not in Paris, she writes about it.