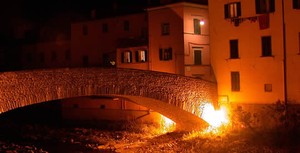 Chef Amedeo explains: “It was a characteristic restaurant maintaining the local traditions of an authentic country tavern, serving simple seasonal dishes such as wild boar, Zeri lamb, home made pastas, funghi, testaroli (local flat bread for the recipe and history go to this site.), and chestnut tarts, not forgetting Pecorino and Caciotta ewe’s cheese and the honey”, he recalled, with tears in his eyes.  “The elegant small rooms were always full and the cellar stocked with fine wines of which my sorella Fernanda, a highly regarded sommelier, was very proud”.

We meet one Saturday night, where the Poletti’s restaurant had been temporarily located, in the tiny medieval village of Grondola, about twenty minutes from Pontremoli. “Lunigiana, (the area where Tuscany, Liguria and Emilia Romagna regions of Italy meet) is a well kept secret”, confides Poletti. “It’s almost unknown to tourists, yet close to Florence, Pisa, Lucca and the Cinque Terre.

He’s right, it’s an unspoilt area of breathtaking natural beauty set between the Apennine mountains, the backbone of Italy, and the Mediterranean sea.  A region of incredible light, of chestnut tree covered hills punctuated with medieval villages, perched high above green wooded valleys, ancient castles built by the Malaspina family (it’s also named “the hundred castles valley”) most of them crumbling edifices, ready for the likes of Four Seasons to come and transform them.

Auntie Elena cooks daily for ten around her antique wooden table. The young leave to work in the real world, often making their mark, Valentino, Fabrizia, Gino, Luigi, Piero, all have tales of the city to recount over countless glasses of Chianti, seated in circles, sheltered by hazlenut trees, time stands still.

Look for the sign Agriturismo, that’s how I met Amedeo, Fernanda and Angela Musetti, cooking one night for the community of Grondola the tiny fragrant medieval cobblestone village which make up the 57 ‘hoods of Pontremoli (which means Trembling Bridge!).

“While the restaurant is being restored I’m a travelling cook”, he says. With Fernanda choosing the wines his menu’s based on the principals of Slow Cooking the international movement created by Carlo Petrini in 1986. Read, an alternative to fast food, the goal is to preserve traditional and regional cuisine, encourage farming, planting seeds, raising livestock characteristic of the local ecosystem.

But what does the sign Agriturismo define? Angela Musetti explains: “It’s a combination of “agriculture” and “tourism” in Italian, a style of vacationing in farm house resorts which was codified into Italian law in 1985. An agriturismo vacation is suitable for the whole family and some places are very romantic and luxurious”, she explains. Go to this website to check out Angela’s addy.

“An Italian agriturismo will usually serve food prepared from raw materials produced on their farm or at least locally. Some will allow the guest to participate in the activities surrounding the farm. Despite the rural nature of the lodging, one might expect a rustic experience; yet many agriturismi feature excellent accommodation as well as swimming pools, tennis, quad biking etc”, adds Angela.

For the dinner a notice was pinned up in the village with a message from Amedeo & Fernando inviting the community to sign their names for a tasting menu at Agriturismo di Grondola, “La Cascina di Baruccia”. 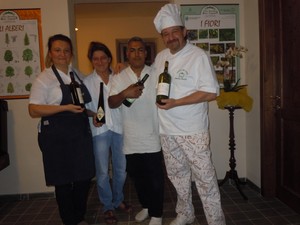 The cost? Just 20 euros! There were seconds and thirds offered and enjoyed. Maria took the rest home for her stray cats. An evening of extraordinary conviviality and a chance to be part of la famiglia.

Meanwhile back in Paris: 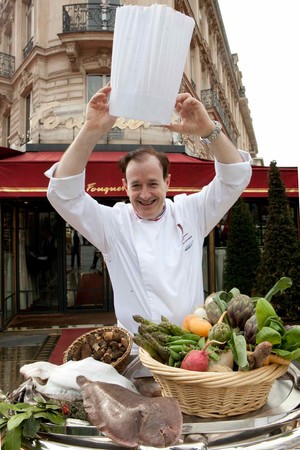 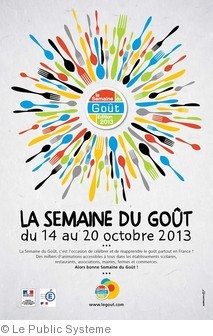 A Conversation on the Train