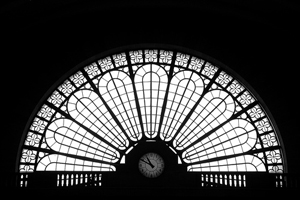 As far as I have ever been able to figure, if you go north of the Gare de l’Est, you will fall off the earth—or land in Belgium, which is about the same. Sometimes worse, my experiences there having been sad and grim or weird at best. But it’s a sunny day, I haven’t looked at the façade of la Gare in years, and it was grimy the last time I saw it. I’ll be looking at the façade from the south anyway, and this could be the right day. I’m feeling neither here nor there, not bad, not good, just listless and at loose ends, out of ideas if not out of sorts. A friend once said to me Va voir des belles choses when I feel gloomy: it always worked for him. So, yes, time to look at something lovely, time to see la Gare all polished up and sparkling, unlike anything anywhere near it.

I wonder if the cathedral at Chartres produced the same effect when it was finished in the middle of the thirteenth century. The church is taller than the railroad station, and its spires rose a hundred metres from the ground at a time when no other building from here to the horizon stood more than four or five metres, except perhaps a windmill or two. La Gare de l’Est, much shorter than the cathedral, still must have produced a similar astonishment when it was finished six centuries later. It was bigger and grander than everything around it and simply much better… perhaps even otherworldly and certainly novel. Haussmann’s artistes de démolition hadn’t yet swung a wrecking hammer or a crowbar anywhere in Paris. The buildings of that quartier, many of them still wooden, may have been picturesque seen from a safe distance, but close up they were crooked, dangerous and smelly. And here—just look at that!—was a palace, an urban folie that anyone could walk into for the pleasure and astonishment of simply being there, even if the people who lived in the dilapidated slums nearby could not have imagined coming up with the price of a ticket.

But not me, not today. I can buy any ticket I want, but I am not going anywhere and I’m not bowled over by the façade of a railroad station, not today. It is lovely, but it is also simply just there. Les belles choses, it turns out, are not the Carter’s Little Liver pills for soul that I was hoping for, not today. 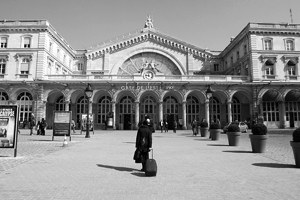 Since I’ve ruled out going beyond the railroad station, I go back—and whether I go straight back or to my left or right, I’ll be going the way I came because I zigged and zagged to get here this late morning. Though I have a prejudice about it, backtracking is sometimes a good idea. My prejudice grows out of an opinion of myself that I know I don’t deserve—namely, I don’t observe everything as sharply as I claim on the first pass. Today I walk right by an unprepossessing building with a large boring lawn in front of it and a banal colonnade off to one side. Had I gone in, as I did only a few days later with a friend, I would have discovered one of those things that pays back my wandering with no aim in mind or sight—a café tucked into a walled garden. But I don’t and continue my retreat.

No, not really a retreat. Retreating armies or scared people on the run usually have a goal, a place in mind or at least some position of safety, a desire not to be slaughtered. I’m not that worried, not thinking about the advancing barbarians who will roast me alive on a spit and parade my head around their camp on a pike. Well, we’re fresh out of barbarians like that, at least in Paris these days, but the punks standing on the corner (a different version of les arabes du coin, I guess) trying their damndest to look tough don’t exactly strike terror into me. Maybe it’s because the antediluvian phrase Drugstore Cowboys pops into my head and makes me laugh out loud which seems to disconcert them or maybe because there’s just not that much to be afraid of these days, certainly not three teenage clowns.

Of course, everyone tells me otherwise, and maybe you do too—or will if you get the chance and care to. But I don’t want to hear about terrorism any more or put up with what I call the security chic of “street furniture,” otherwise known as huge concrete planters, and bollards ringing buildings, of imaging and groping and confiscated water bottles at airports, of chin-pulling in the media over civilizations at odds and the Muslim psyche and Western imperialism’s chickens, or whatever flies through the air, coming home to roost or just crap on our heads. The odds of getting blown up a few streets south of la Gare de l’Est are pretty skimpy today, and I don’t want to hear that I should be afraid. Fear these days is a made-up story, a fashionable meme, an artifact of boredom. 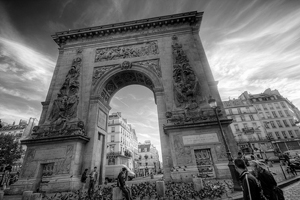 Anyway, I’m distracted by sadness, which seems more present. On my way up here, along the Boulevard de Magenta, I passed several clutches of Asian whores, the sad, homely and totally indifferent street girls who have recently replaced the Russians and the other Eastern Europeans in the trade. They looked to be less than no fun, and I won’t even say anything about their non-eroticism, and what could be sadder than that? And if the girls weren’t sad enough, what about all the places offering to buy gold or anything of value, no questions asked, “provenance” and “bill of sale” and even “cock-and-bull story” evidently being unknown words. And all the panhandlers, now practically wallpaper anywhere I go in Paris, and the inevitable Roma girl who has just found a ring in the street, imagine that, and maybe, if it’s not yours, Monsieur, we could…? Gypsies, tramps and thieves, but it’s not a song played on the radio to people listening in the comfort of their cars and homes. It’s the real thing, coming to you, Br’er Joe, in living dinginess right here in a quartier they tell me is gentrifying. God save me from the wrong side of the tracks.

Anyway, where was I? Yeah, I know, walking south from the station on a street with more little Turkish cafés than I’ve ever seen anywhere, all with paper signs in the window offering döner (illustrated, in color) which no one is eating though it’s as good a time as any to sit down and have lunch. But the men (no women in sight) sitting at the wooden tables, obviously carried outside from the café or as likely from the apartment upstairs, are staring at their coffee cups or one another, talking little, seeming to have no appetite at all. Sad Street. Bienvenue à la rue Triste (10e). I figure I better go, get out of here, get out of my own sadness, time to pick up my feet and the pace, deal a new hand, grab a change of scenery, forget my troubles, come on, get happy…

So I do… at least I pick up the pace and after about fifty metres slow to a crawl. The sidewalk is blocked and so is the street by several dozen passersby, loungers, time-wasters and the generally unbusy faune de Paris, all staring at a fixed point, the center of their ragged circle. I thread my way through the mob using the wiles and the elbows of the longtime subway rider and get close enough to see what there is to see. Nothing more than three cops, all with their black gloves that are supposed to strike terror into the drugstore cowboys of the cheaper arrondissements, holding a dark man with a bloody face against the wall. He’s yelling at the top of his lungs, not yelling but imprecating, calling down some huge and entrails-burning curse on something or someone. The cops don’t seem to have anything in mind, don’t seem to know what to do except continue to pin him to the wall, while he goes on with his oratorio in a language I can’t begin to figure out. Turkish? Why not? I get past the epicenter of this eruption and catch up with a man who is walking away quickly, turning back every other step to look at the howling man. He looks terrified. Are the curses or threats aimed at him? I guess they are and whatever they may be, they seem real to him, credible, as the cops and the experts like to say, imminent, immediate. And personal. 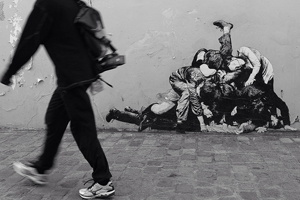 That’s it, surely that’s it. Don’t tell Alper or Kutluğ or Özgür or whatever his parents named him when he was a bouncing baby boy about terrorists and civilizations on collision courses, about potential threats or suspicious online chatter. Now that he’s a grown man, he knows better, knows where fear lies—right there just a few metres down the street and pinned to the wall by three French cops who haven’t a clue what’s going on. He knows what to fear, and knows to get the hell out of here as fast as he can, but with an eye over his shoulder just in case. It’s a good and healthy reminder, glad to have it, and I’m much obliged to you. Maybe I could even try to tell you, if you weren’t in such a hurry and hardly in the mood to stop and have a little chat with me, that you’ve really cheered me up today, set me straight, wised me up. Thanks, pal. Keep your head down and so will I.

A City Gone to the Dogs