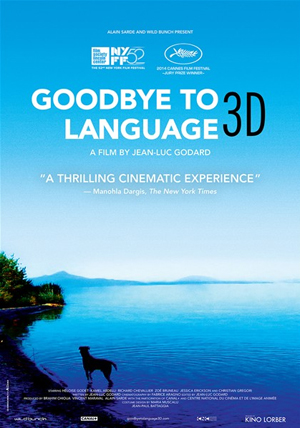 Jean-Luc Godard has been making films his own way for about 60 years, ever since Une Histoire d’Eau (A Story of Water), the documentary short he co-filmed with François Truffaut, and then the ground-breaking feature Breathless. His career has been, in effect, the history of modernist cinema. Godard has often been ahead of the curve. That’s not quite the case with Adieu au Langage (Goodbye to Language), his 3D opus. Hollywood filmmakers from James Cameron to Martin Scorsese have been innovating, developing and exploiting 3D for the last decade or so. Here Godard merely betters the curve.

Godard’s approach to 3D is exploratory, rather than theme-park-entertaining. Though Godard isn’t known for working with enormous budgets, the visual effects are the most terrific this reviewer has seen. Instead of exploiting the technology for slam-bang action moments (a spear flying straight at us!), he takes people, objects and even plants onto a plane of existence that overlaps our own. It looks less like “3D” than like real life. When a naked woman moves behind a lamp you have to restrain yourself from peering around it for a better view.

The problem is that Godard goes too far into the technological badlands. He splits images, superimposes one on top the other, plays with perspective. Some have praised this as being insightful about time-space perception, or some such. It basically just made my eyes hurt. Godard is more impressive as a maker of stunning, evocative images. In Adieu au Langage there are plenty. There are landscapes, cityscapes, riverscapes that recall modernist paintings. There are even affecting images of Godard’s dog Roxy that bring to mind the recent pet paintings of a certain ex-US president. 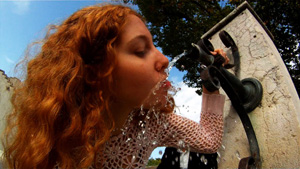 Considering that Godard is a master image-maker, his obsession with language seems perverse. In the past he took a jaundiced view of words turned into public totems—political slogans, advertisements, cultural memes. He deconstructed the impact these had on his characters. Lately he’s taken to sampling quotes from classic writers, mostly French (in this film Proust, Mallarmé, and Claudel, among others). Out of context these words are abstract and empty remnants stuffed into a vast scrapbook. Maybe that’s his point? Point well taken, but it’s not very resonant, except to a French lycéen taking his or her literary Baccalauréat.

Is there a story in all of this? Well, there are two real characters, a man and a woman. They’re in some sort of extramarital situation, but it doesn’t go anywhere. They trade world-weary quips, bemoan their relationship, wax philosophical. (They could be entertaining each other with Jean-Luc Godard impressions.) There’s plenty of nudity, almost all of it female, though curiously little actual sex (and thankfully no special effects with bodily protuberances—one wonders what Russ Meyer would have done with 3D). 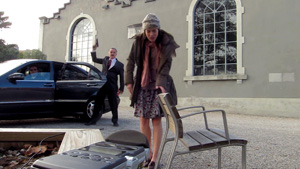 There are also sequences of a woman (it’s unclear if it’s the same one) being attacked on the street or harassed by the police. These recall the bursts of violence in old Godard movies. What’s the significance? There are allusions to Solzhenitzyn’s writings on Communist oppression (this from an erstwhile leftist), and references to the Holocaust (this from a long-time resident of Switzerland). The tone is elegiac, not contemporary. One longs for the days when the director was passionately in touch with the pulse of the cultural and political moment, a prophet of what was coming next week.

This isn’t the first time Godard has been taken with purely technical innovation. For a time in the ‘70s he isolated himself from the world of mainstream film to focus on experiments with video, linked with doctrinaire radical politics (what used to be called agit-prop). This was a dead-end—the works of that period are familiar only to hard-core Godard scholars. But maybe they led in some way to his renascence in the 1980s. Whether his foray into the third dimension bears substantive fruit, remains to be seen. The good news is that at age 84, Godard isn’t ready to say adieu to cinema—or us.

Confessions of a Culinary Student at Le Cordon Bleu