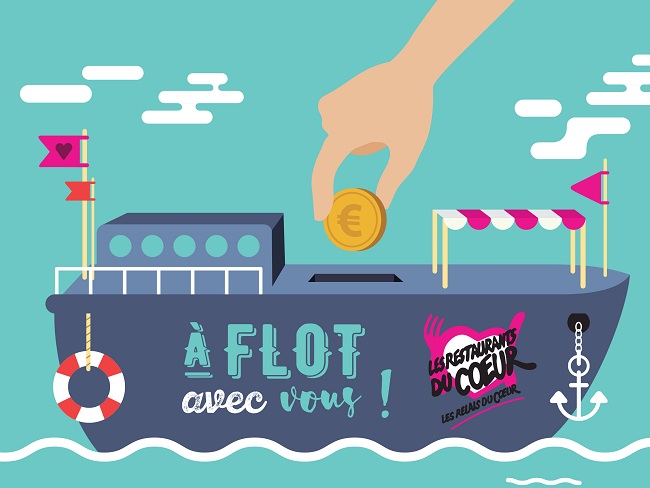 Stretching from the Jardin des Plantes to the Arab World Institute in the fifth arrondissement, le Quai Saint-Bernard is probably better known for its outdoor Salsa dancing. Every evening in summer the quayside by the Jardin du Tino-Rossi is filled with both expert and beginner dancers doing the Salsa or the Tango while the tourist-filled Bateaux Mouches float past.

There is though, another type of barge here, tied up to the banks of the Seine, a barge which is neither a tourist restaurant nor a trendy bar, but a barge for the homeless of Paris. 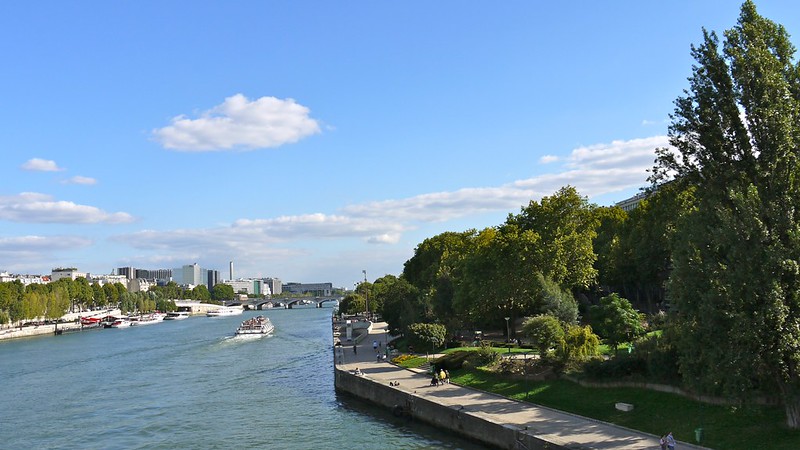 Housing and feeding 70 otherwise homeless men, La Péniche du Coeur is part of the vast organization known as Les Restos du Coeur (Restaurants of the Heart). This charity, which does much more than feed and house homeless people, was the inauspicious brain child of the comedian and actor Coluche in the 1980s. His aim was a simple one. He wanted to start a soup kitchen, launching in Paris and eventually spreading throughout all the big cities of France. The first Resto du Coeur opened in December 1986 with the intention of giving away two- to three-thousand meals a day.

In that first winter a staggering eight and a half million meals were distributed. By 2018, the number had increased to 130 million.

Jean Jacques Goldman then recorded ‘Les Restos du Coeur’ with other celebrities in a televised show. The public donated several millions of francs. The charity was now unstoppable.

Coluche, learning that surplus food from the EU cost more to store than to distribute free to the poor, approached the European Parliament and in 1987 the surplus was made available to four organizations.

Although the main activity was to distribute food packages and hot meals to the needy– which included not only the homeless, but also those with low incomes, single families, the elderly with inadequate pensions, and young adults– the goals of the organization expanded to encompass the social care and integration of the homeless.

La Péniche du Coeur is the perfect example of the ethos of this charity. La Péniche du Coeur is a ‘Centre d’Hebergement d’Urgence,’ with very specific, fixed aims. Each man can expect a room of his own with two hot meals a day. Kindness, a clean bed, showers and hygienic products, all add to his physical wellbeing. But the aims of Les Restos du Coeur go much further than hot meals and physical improvements; the charity sets out to find solutions of accommodation or adapted housing for the men and even more importantly a program of reintegration, and it is here that the trained volunteers prove indispensable.

Volunteers who help prepare and serve the meals on the barge eat with the men, discuss, play board games and accompany them on cultural outings. The 180 volunteers on the barge are organized into 15 teams, a team in the morning, one in the evening, and another for distributing Sunday lunch. Volunteers go through a training period and are expected to sign up for at least six months, but can work either weekends or just one day a week. La Péniche du Coeur also has four social workers to listen to the problems of the men and to advise them.

Les Restos du Coeur is financed by private donations, public funds and public organizations and looks for donations of clothes, food and bedding and always more volunteers. There are now more than 600,000 volunteers throughout France. Les Restos du Coeur and indeed La Péniche du Coeur advertise on their web sites situations that need filling, anything from driving the food distribution trucks, manning the hot meal trucks that go out at night to feed the homeless or offering your expertise in a given field, all are welcome, young and old.

So while the incongruous sight of Salsa dancers on the banks of the Seine will lighten your heart, perhaps the sight of La Péniche du Coeur lit up at night filled with men fed and warm and regaining their dignity, is the most beautiful sight of them all.