The Institut du Monde Arabe: Reinventing Itself for the Modern World 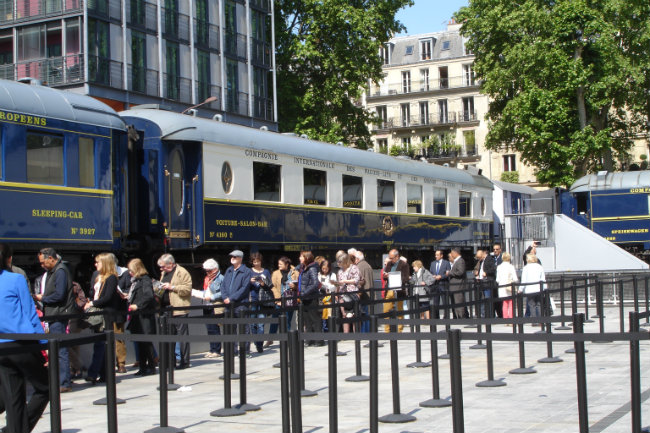 The Institut du monde arabe (IMA) in the Paris 5th has been given new life under the leadership of former French Minister of Culture Jack Lang. Appointed in early 2013 as the IMA’s president, Monsieur Lang’s mission is to reinvent the role of the IMA, which opened in 1987, to show the Arab world in all its dimensions, and to attract a larger and more diverse audience. With the current exhibitions, and with the new energy Monsieur Lang has injected into the Institut, the IMA is well on its way to achieving those goals.

The first exhibition, the excellently mounted “Il Était Une Fois L’Orient Express” (Once Upon a Time the Orient Express), which runs until August 31, has already been seen by more than 75,000 visitors since opening in April. 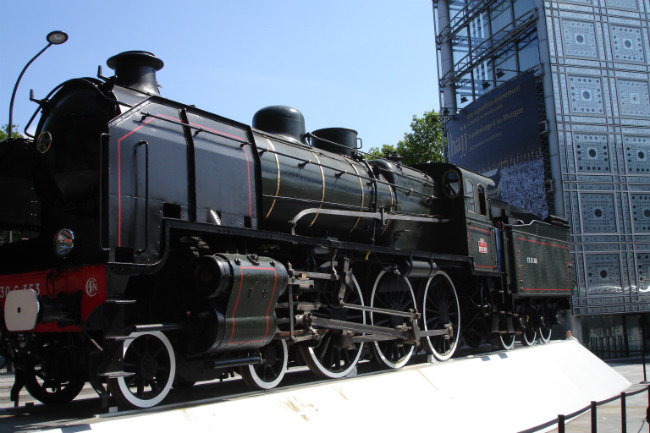 A locomotive and four railcars from the Orient Express, all owned by France’s national railroad and impeccably restored, are exhibited on the large IMA plaza. Visitors enter the railcars and step back into a bygone world of privilege and luxury. The glass panels decorating the Train Bleu were made by famed glassmaker René Lalique. Silver powder was used to create the flowered marquetry in the bar car. Sterling silver was the choice for serving pieces and cutlery, and even for some sinks.

And the artifacts of life on the Orient Express presented by the curators vividly recreate this bygone world. For example, the tables of one car show how passengers might while away the hours while relaxing in their commodious and well-cushioned armchairs – drinking wine and champagne cooled in silver buckets and drunk from the appropriate glass; playing cards; reading novels, guidebooks, and newspapers in many languages, using their pence-nez and eyeglasses drawn from their leather eyeglass cases; writing postcards and letters and keeping journals written with fountain pens or on a portable typewriter; smoking a cigarette held in a long, thin cigarette holder, lighted with a gold cigarette lighter; studying maps; listening to Decca 78s on a portable phonograph or to the ebony piano in the bar; and checking the time on their sterling silver or gold pocket watch. 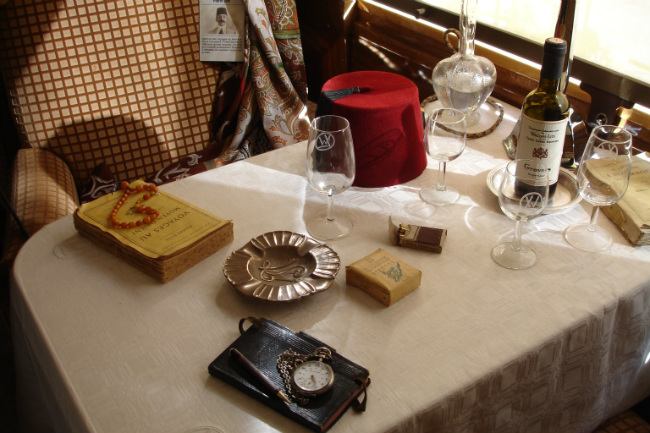 The fashions of the day are seen in the clothing draped on the seats or hung on hangers and hooks. Scattered throughout are elegant silk scarves and shawls; gloves and strands of pearls of several lengths; and men’s and women’s hats, including a fez and a woman’s veiled hat, which would have added an air of mystery to anyone wearing it. Men’s fashion is seen in a double-breasted topcoat and in a top hat and tails and an ivory-handled ebony cane. A woman’s slinky peach-colored negligee hangs sensually from a sleeping cabin door, and women’s silk stockings and garters are displayed in a travel case.

A timeline of the history of the Orient Express placed alongside the railroad cars traces its conception by visionary Belgian-born businessman Georges Nagelmackers, who created the Compagnie Internationale de Wagons-Lits in 1876; to its first run in 1883, which turned out to also be the first known press junket; to its final run between Paris and Istanbul in 1977. 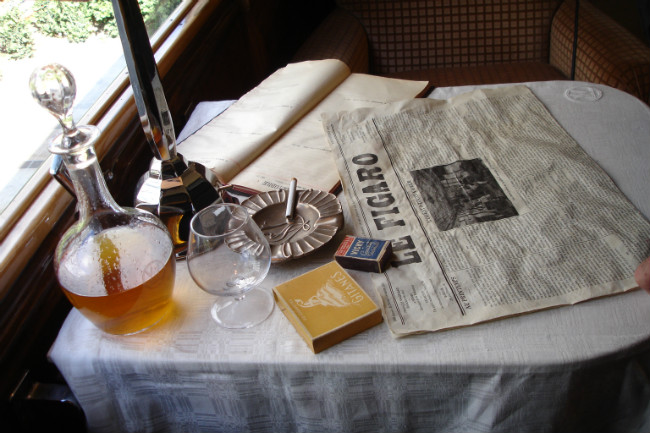 After visiting the rail cars, visitors are directed to the rest of the exhibition, inside the IMA. The history and mystery of the Orient Express are vivified through videos running continuously along the walls; descriptive narratives; photos; period posters advertising the wonders and adventure of train travel; maps showing train routes; photos of travelers and the exotic places they visited, some dressed in Arab dress for the camera, and others, for example, on camels; and much more. There are conductors’ uniforms and luggage specifically designed for travel, including small armoires produced by Louis Vuitton; and information about the books – Agatha Christie’s Murder on the Orient Express is perhaps the most famous – and movies – that take place on the Orient Express.

And the stories of drama and intrigue are told – of the train being stranded in a blizzard in January 1929 and its starving passengers; of Josephine Baker, the American-born French dancer, singer, and actress, being aboard the train when a bomb exploded on the track, plunging two cars down a ravine and killing twenty-two people; and the time a president of France fell from the train, a fact not discovered until seven hours later. 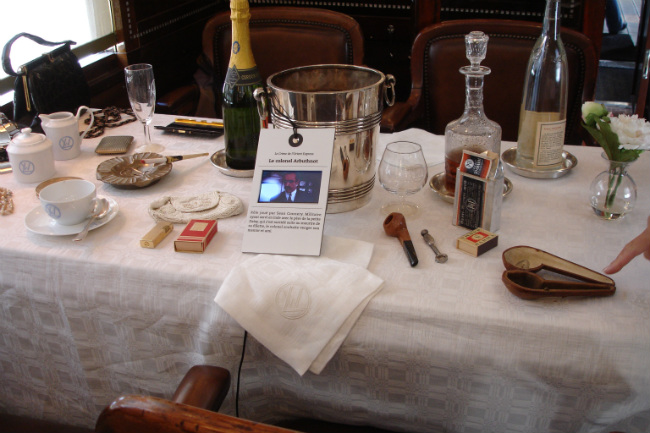 All this adds up to a fascinating world class exhibition that will appeal to train, history, fashion, and interior design enthusiasts, not to mention those simply intrigued by the storied Orient Express.

And the link to the Arab world? Not only did the Orient Express open up the East to West, but it also opened to the West to East; in other words, it was an early contributor to globalization – and perhaps the nascent opening of the Arab world.

As you exit the exhibition, relax with refreshments served by the Lebanese restaurant Le Khalife (which has two locations in Paris). And if you’re a foodie, you can book a table for dinner in the Orient Express dining car, prepared by three-star chef Yannick Alléno (see website for further details). 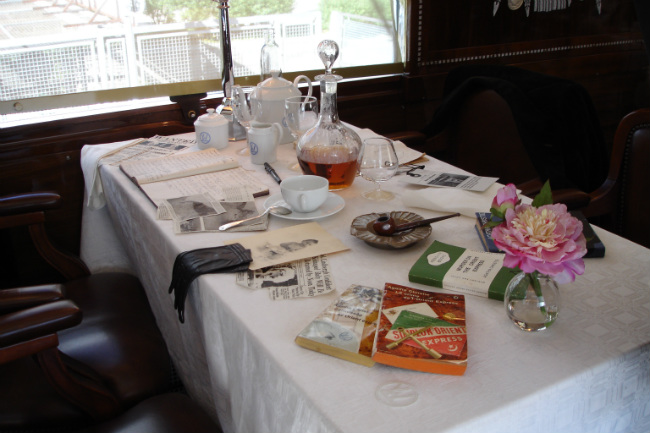 In keeping with the objective of making the Arab world more accessible and understandable to the rest of the world, the IMA has also mounted the exhibition, “Hajj, le pèlerinage à La Mecque” (Hadj, Pilgrimage to Mecca). The hadj is one of the five pillars of Islam, so it is appropriate that the IMA begin to open up the Arab world with an exhibition that explains the history and meaning of one of the most important events in Muslim life. The mysteries of the hadj are revealed through ancient texts and modern videos. This exhibit is a great step in helping non-Muslims understand this important aspect of Islam, not least of which is because there is extensive footage of what actually happens. It is a valuable and welcome window on the Arab world and helps demystify this heretofore relatively closed culture.

But there is much more to the IMA. The Institut has also mounted an exhibition on the discovery of the Temple of Ishtar; part of the permanent collection is on display; there are lectures, debates, movies, concerts – the IMA’s Infomag is a book-length catalogue of events.

A final note. The timeline of the Orient Express exhibition includes mention of the creation of the State of Israel in 1948, and the permanent collection exhibits items related to both Judaism and Christianity. These gestures are emblematic of the Arab world opening up and accepting the realities of the modern world. These are small gestures, but their significance should not be underestimated.

The IMA has made great strides under Jack Lang’s leadership. It is becoming a dynamic and exciting institution and worthy of the culture it represents. It is well worth a visit. 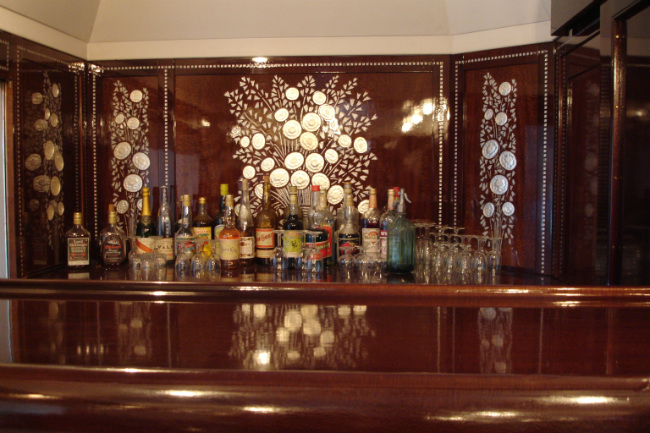 And while you’re there…

Be sure to note the architectural detail of the façade. With cultural sensitivity, French architect Jean Nouvel’s design includes metallic screens behind the glass curtain wall that unfold with moving geometric motifs that are actually 240 photo-sensitive motor-controlled shutters that automatically open and close to control the amount of light and heat entering the building from the sun. The mechanism creates interior spaces with filtered light, an effect often used in Islamic architecture.

Note: Tickets for the Orient Express Exhibition are dated and timed

See website – www.imarabe.com – for further details about guided tours, group visits, schedule of concerts, lectures, and movies, and much more 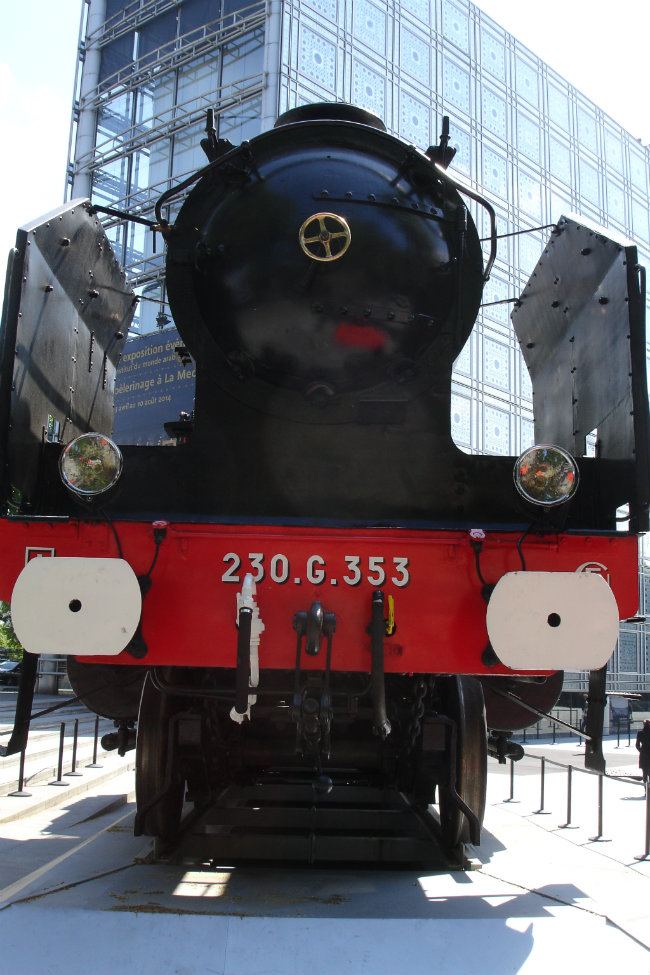 Previous Article One Staircase, Twice
Next Article Photo of the Week – May 30, 2014