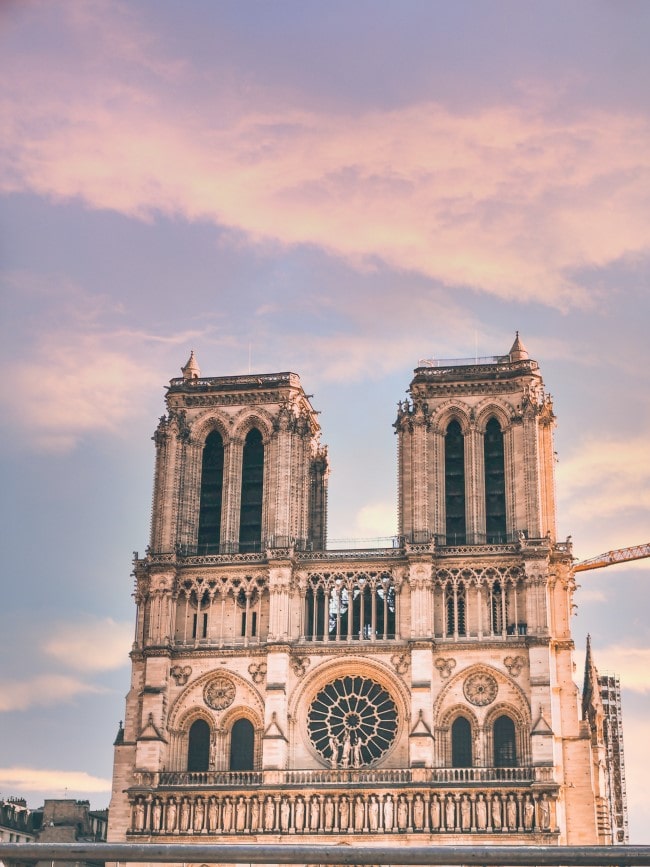 In exciting news, officials have announced that Notre-Dame cathedral is on track to reopen in 2024, five years after the devastating fire. The work to secure the building has been completed — this includes such things as wrapping the gargoyles, reinforcing the flying buttresses, and removing burned scaffolding — and now the restoration can begin. To quote CNN Style: “‘That means that we’re officially saying that the cathedral is now saved, that it’s solid on its pillars, that its walls are solid,’ General Jean-Louis Georgelin, president of the organization responsible for the restoration told CNN affiliate BFMTV Saturday.” The 2024 reopening, which Georgelin said would be a “victory for all of France,” will fulfill President Emmanuel Macron’s promise to the public that reconstruction works would be completed within five years of the April 2019 blaze.”

“Arc de Triomphe, Wrapped”—  an homage to artists Christo and Jeanne-Claude, who first conceived the project in 1962 — has officially been unveiled on the Champs-Élysées. The monumental artwork will be on display for nearly three weeks. The cost of the project (14 million euros) is being financed entirely through the sale of Christo’s preparatory studies and drawings. To quote the Associated Press: “Visitors to the famous Napoleonic arch, which dominates the Champs-Élysées Avenue, will not only be able to see the gleaming fabric, but to touch it too — as the artists had intended. Those climbing the 50 meters (164 feet) to the top will step on it when they reach the roof terrace.” France’s Culture Minister Roselyne Bachelot called it “a formidable gift offered to Parisians, the French and beyond, to all art lovers.”

Meanwhile President Emmanuel Macron has recalled the French ambassadors to the U.S. and Australia in anger over a secret deal that caused the loss of a multibillion-euro submarine contract. Bloomberg describes it as a “diplomatic slap”— the first time ever that Paris has removed its envoy to Washington. As quoted by Bloomberg, French Foreign Minister Jean-Yves Le Drian said, “There has been duplicity, contempt and lies. You can’t play that way in an alliance.”

Shall we segue into Opera? The New York Times is saying that “Oedipe,” which opened at the Opera Bastille on Monday, “may just inaugurate a new era. It is the first production that was commissioned by Alexander Neef, who took over as the Opera’s general director last year.” The past few years have been traumatic, fractious ones at the Paris Opera. “In late 2019 and early 2020, labor strikes over a pension policy overhaul resulted in a 45 million euro deficit in a budget hovering around 230 million euros. And that was before the pandemic forced the cancellation of over a year’s worth of performances.”

Last but not least: There’s a new chef at the helm at the Hôtel Plaza Athénée, one of the city’s esteemed palace hotels, and restaurant critics are wondering if he’s too “bling bling” for the role. To quote France 24, Jean Imbert “made his name by winning TV competition “Top Chef” and then exploding on social media, where he could be seen hob-knobbing with the likes of Jay-Z, Pharrell Williams, Marion Cotillard and Kylian Mbappe.” He’s now taken over for Alain Ducasse, one of the world’s most decorated chefs, and it’s causing quite the stir.

Perhaps it’s a daring move, indicating a wider trend at luxury hotels? France 24 has the skinny: “For Le Figaro’s food critic Emmanuel Rubin Imbert’s appointment was “unworthy” of a top hotel. Franck Pinay-Rabaroust, the founder of food magazine Atabula, also has his doubts. “It’s an earthquake,” he said. “He’s broken all the codes. For the first time, we are putting a chef into a palace who doesn’t have any stars, who hasn’t proved himself with other big chefs. “At best, it’s surprising. At worst, it’s worrying,” he added. Some of Imbert’s fellow chefs, however, have been more encouraging. “You can have a great experience even from a chef without any stars,” said Glenn Viel, the youngest French chef to earn three.  “It’s quite daring, quite ballsy and it could attract a younger clientele looking for something new. I’m sure he’ll be successful,” Viel told AFP.”

Previous Article How Lily-Rose Depp’s Latest Looks are the Epitome of French-American Style
Next Article Batignolles: Exploring the Untouristed Corners of Paris