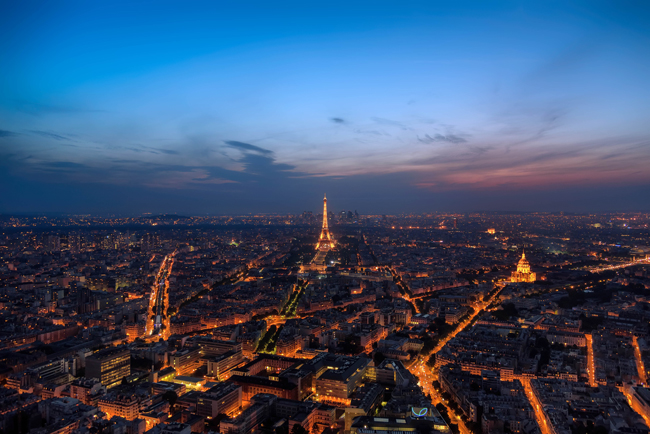 If you’ve never participated in Nuit Blanche, the all-night cultural event that takes Paris by storm every year, consider planning a trip for 2023. To be more exact: the first weekend in June. That’s right; for the first time in its 20-year history, Nuit Blanche will switch to a summer schedule. Instead of the first weekend in October, the event will usher in the month of June in a spectacular way. (The decision was announced by Paris City Hall following a debate with local inhabitants, who prefer a summer festival. The sometimes-complicated autumn weather conditions played a factor.) Here are some of the highlights of the 20th anniversary of Nuit Blanche which took place last Saturday night in Paris (and why you won’t want to miss out next year).

Pastry chef Pierre Herme, “the Picasso of patisserie,” created a macaron forest in the Hotel de Ville. An island of multicolored foam spewed onto the Piazza Beaubourg from the massive white air vents facing the Centre Pompidou. (An artistic creation by Stephanie Lüning.) At Place Baudoyer, inside the courtyard of the Académie du Climat, spectators were equipped with umbrellas as artificial purple rain fell… to the soundtrack of Prince’s “Purple Rain.” The legendary Molitor swimming pool was transformed into a psychedelic immersive space with hypnotic colors. And the Place des Vosges became a playground for French artist Pierre Delavie, and a young king who escapes his statue to wander by moonlight, in “le Jardin des Lys.” To quote the City of Paris website:

“According to an old Parisian legend, Louis XIII’s statue regularly stumbles in time. As if skipping a page, the young king escapes from his plinth in Place des Vosges on certain evenings in order to enjoy a moonlight ride. His image appears and disappears among the trees, as if absorbed by an ancient forest. Around the king, sculptures known as Les Encombres (The Mishaps), straight from a painting by Hieronymus Bosch, play their soft music, seemingly witnesses of another reality. Perhaps, through their silence and immobility, in contrast to Bosch, they whisper to us that paradise is not to be found in another life, but right here in front of us, a Garden of Eden that we continue to turn into hell.”

For more scenes from Nuit Blanche, check out the city’s website here: https://www.paris.fr/pages/retour-sur-une-nuit-blanche-pas-comme-les-autres-22173

The Eiffel Tower is no stranger to controversy, starting from its very debut when Le Tout Paris viewed it as a monstrous eyesore. Controversy continues to this day, particularly regarding the redevelopment project for the 2024 Summer Olympic Games. Following protests about the plan to cut down trees to make room for baggage facilities, there have been complaints about the desolate look of the formerly grassy lawn. Now Emmanuel Grégoire, a deputy mayor, has tweeted that the damaged lawns will be replanted identically.

The initial project was put in motion to add more green space and better welcome the 20 million annual visitors to the area. As explained by Grégoire in a recent interview, the city is making concessions to the original redesign project, also cutting down the budget, but the overall spirit (of more pedestrianized green space) remains the same.

There’s been lots of talk about the necessity of cutting back energy use this winter. Politicians are advising turning down the heat and “wearing turtleneck sweaters” (a French minister got backlash on that one). Yet the truth about “energy sobriety” remains, particularly with the ongoing war in Ukraine. And even the RATP Paris metro authority plans to turn down the thermostat on its trains in order to manage rising energy prices.

Speaking of politicians, the White House has announced that it will host French President Emmanuel Macron and his wife Brigitte in the first state visit of the Biden administration. The announcement follows months of pandemic-related challenges to the diplomatic calendar. As reported by The New York Times, “The visit, which is scheduled for Dec. 1, comes as both leaders have sought to shore up cooperation between the United States and Europe amid several global crises, in particular Russia’s invasion of Ukraine and the ripple effects it has caused across global markets.”

Paris Fashion Week “returned at full throttle,” to quote WWD, with 107 houses showcasing spring-summer 2023 collections. Some of the highlights: a surprise appearance by Cher (she stole the show at the Balmain show in a spandex bodysuit), model Bella Hadid having a white dress spraypainted directly on her body, a debut by Victoria Beckham (her show was held in the cloisters of the Val-de-Grace church), and Dior’s homage to a 16th-century femme fatale with an abundance of crinoline and baroque heels. To quote W magazine: “Creative director Maria Grazia Chiuri has long taken influence from powerful, feminist muses—and for spring 2023, she dedicated her collection to Catherine de’ Medici, the powerful 16th-century ruler who clearly had her own perspective and did things her own way. Medici was, of course, an early adopter of high heels and the corset. Here, her three-decade reign of power was reinterpreted through luscious Baroque-Goth getups replete with hoop skirts, gilded gloves, architectural corsets, black lace, and Medieval embroidered flowers.”

Previous Article Drouot Auction House: Treasures and Curiosities for Every Budget
Next Article Paris Vignettes: Unique People in the City